Put on your shocked faces, people, the Nvidia GeForce GTX 1660 has arrived and we’re all meant to act surprised that a month after the Ti card launched we’re getting a new version. Don’t look it square in the eyes and I reckon we can pull this off. If the GTX 1660 Ti was the worst kept secret in tech then the existence of the GTX 1660 makes it perhaps the most obvious graphics card ever made. Though the upcoming GTX 1650 is challenging that…

But that’s not to say there aren’t some little surprises to be had with the new Nvidia GeForce GPU. Well, I say ‘surprises’ but most of the actual specs were leaked well before launch, so even that little static shock of excitement has been stolen from us. Still, the specs at least aren’t as obvious as the card’s appearance on the shelves of your favourite retailer.

The GTX 1660 has squeezed itself into the tightest of spots in the mainstream graphics card market, a place that’s getting more populous with every passing moment. Nuzzling itself in between the GTX 1660 Ti, RX 590 and RX 580, the new GeForce has got a fine price/performance juggling act on its hands. Sorry, did I not mention the new GPU also has hands?

Because of the pricing spread between the first 16-series card and the top two AMD Polaris GPUs, picking the exact specs of the non-Ti version of the GTX 1660 must have felt a little like trying to nail a loose bowel movement to the wall. On the one hand the GTX 1660 cannot be specced out to cannibalise the 1660 Ti, and that means it has to be tangibly slower than its slightly older sibling. But it also needs to still be faster than the RX 590 and the RX 580 from AMD, while not costing as much as either.

Read more: The best gaming monitors to match your GPU

That doesn’t leave it a lot of wiggle room out there and the choices that Nvidia’s engineers and execs have made in terms of the make up of this version of the Turing TU116 GPU bear that out. 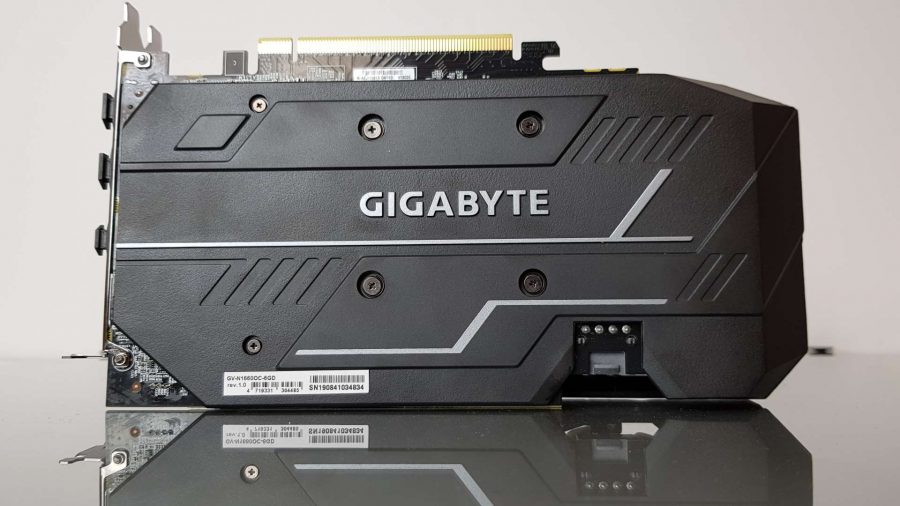 Yes, it’s still the 12nm TU116 graphics silicon, but Nvidia has cut out a pair of streaming multiprocessors from the package to take it from 24 SMs down to 22 SMs. That means the CUDA core count has dropped from 1,536 to 1,408… which isn’t actually all that much. In fact with a drop of just 8% in CUDA core count that makes it the smallest slice Nvidia has ever removed to make the non-Ti version of a GPU.

But then Nvidia couldn’t cut too much out of the chip or else you’d be looking at GTX 1060-level gaming performance and that just wouldn’t cut it in the face of the combined Polaris competition. And that means it’s had to be rather more generous than maybe it would otherwise want. 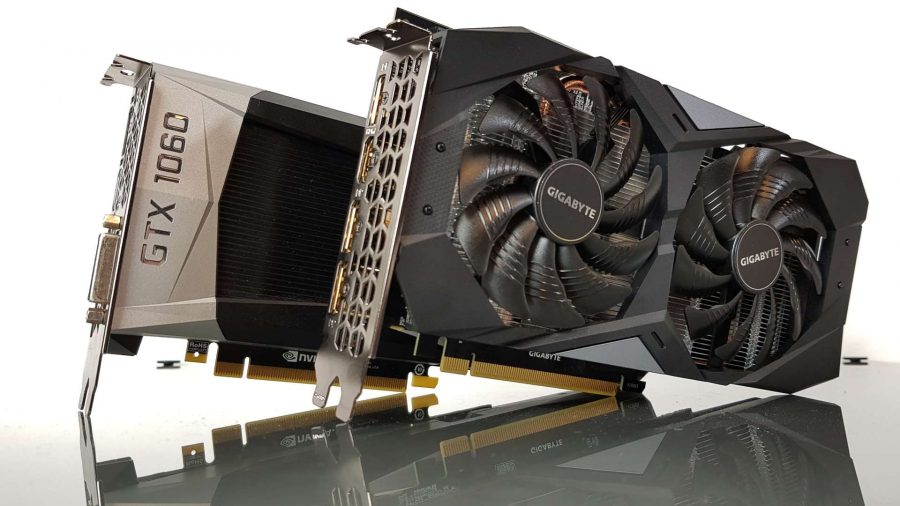 Where it has been able to make a big change, however, is in the memory design of the lower-caste GPU. Instead of the GDDR6 memory used throughout the rest of the Turing graphics card range, Nvidia has switched back to GDDR5 for the bottom rungs of the 16-series ladder. That means a switch from 12Gbps to 8Gbps, and a 33% drop in memory bandwidth, from 288.1GB/s to 192.1GB/s.

That won’t make a massive difference in terms of overall gaming performance, but does change the total bill of materials for the new card. GDDR6 may not necessarily be in the HBM2 realms of super-expensive memory tech, but switching to GDDR5 will likely represent a pretty significant cash saving.

In terms of the clock speed there isn’t a lot between the GTX 1660 and its Ti brethren. The reference frequencies have the boost clock of the newer GPU at 1,785MHz and the Ti running at 1,770MHz. That said, the Gigabyte GTX 1660 we’re testing is an overclocked version and that gives it a hefty 1,830MHz boost clock.

So, lightspeed gaming then, right? Well, the GTX 1660 is definitely faster than the now defunct GTX 1060, so any fears that it might just launch at the same level have thankfully been salved.

Its real target, however, is the RX 590 from AMD. That’s the card responsible for Nvidia having to cut close to the Ti bone in terms of the GTX 1660’s specifications, and it’s actually a rather close-fought battle between the two.

On the whole the Nvidia card, in this Gigabyte overclocked trim, does outperform the top AMD Polaris GPU. There are no Founders Editions in this Nvidia partner launch, so I’d expect a good number of the GTX 1660 cards you find on the shelves will be overclocked to some extent.

And that means the GTX 1660 is doubling down on the Ti version’s efforts to make the RX 590 entirely obsolete. With Deus Ex and Battlefield V, two traditionally AMD-favouring titles, you will get more out of the Polaris GPU, but for the majority of our gaming suite the GTX 1660 is either running at the same speed or slightly ahead. And doing it with a lower price tag too.

I would say that this Gigabyte GTX 1660 card is quite heavily overclocked compared with the reference clocked GPUs, despite it sharing the same MSRP at launch. That means reference versions might be a fair bit slower, and there is the chance that the $219 (£199) launch price of this OC card might not stick around long after release day sales have passed.

But for this nominally cheaper Nvidia card its current gaming performance makes it a far more worthy purchase than the RX 590 for a gamer on a budget. There is, however, still the point that the RX 580 isn’t that far off the performance of either the RX 590 or GTX 1660, and just about undercuts both cards in terms of its pricing. 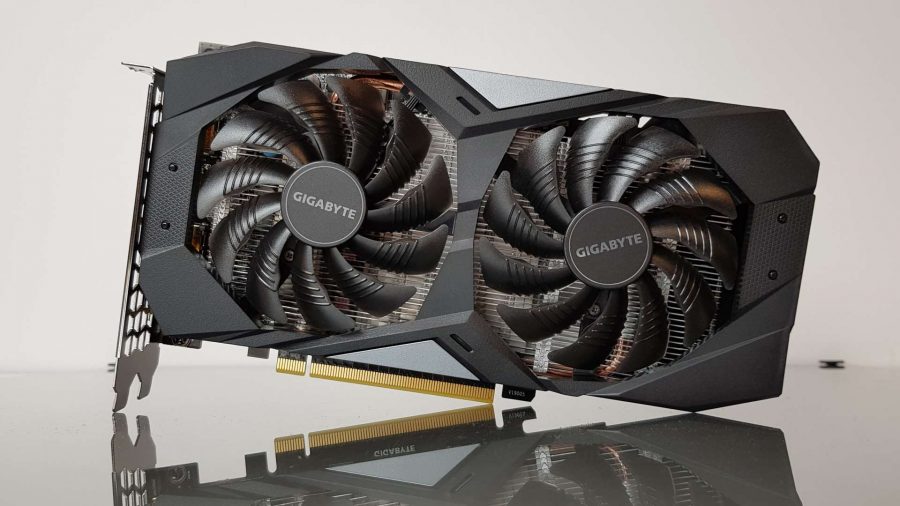 The 8GB RX 580 cards are often well under $200 and still make for a great gaming upgrade for anyone rocking an older GPU who isn’t able to stretch over that $200 price point. Again that’s why Nvidia has so specifically targeted the price of the GTX 1660, even this overclocked Gigabyte card, at $219 (£199).

Specs-wise it’s there to compete with the RX 590 and priced against the RX 580. And at this point I doubt there’s a lot AMD or its partners can do about dropping the Polaris pricing any lower than it currently is.

With the AMD Navi mainstream GPUs arriving around the summertime production of Polaris chips will inevitably slow to make way for them. That means the overstuffed Radeon inventory will thin out, prices will likely start to rise, leaving the mainstream Turing GPUs as potentially the only show in town until Navi does launch.

There is still the struggle with the GTX 1660 that we’ve got a brand new generation of graphics cards that isn’t really offering a whole lot that’s new. It’s effectively offering a similar price point for similar levels of gaming performance compared with the cards we have now.

At this price the Nvidia GTX 1660 is the card someone coming in fresh, or upgrading from a three year-old mainstream GPU, should be looking at. But anyone currently sitting on an RX 580, or even a GTX 1060, probably shouldn’t be thinking about this as a genuine upgrade and will have to be looking higher up the GPU ladder, probably towards the $300-ish Ti version.

The new GTX 1660, especially in this overclocked trim, is now the best ~$200 graphics card around... so long as it retains this launch pricing. It outperforms the RX 590 and is priced to compete with the RX 580. But as an upgrade for anyone on mainstream GPUs of the last generation it might not be the card for you.