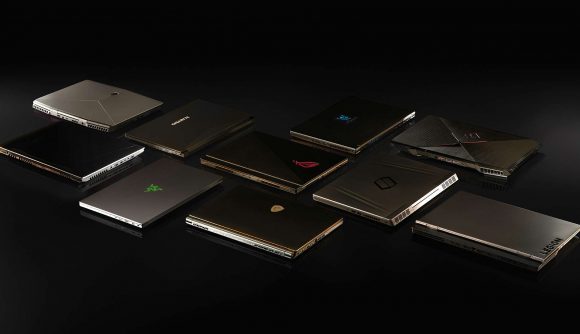 New gaming laptops with mobile versions of Nvidia’s best graphics cards are starting to come to market now, and we’ve had the first glimpse of how they might compare to their desktop counterparts, thanks to Twitter leakers 9550pro and Harukaze5719.

Starting off with an unknown gaming laptop packing Nvidia’s mobile RTX 3060 card combined with an AMD Ryzen 7 5800H, there’s a graphics score given of 8,843 in 3DMark Time Spy. That’s pretty much on par with the average score of the previous generation desktop equivalent, the RTX 2060, with a score of 8,828. Comparing it to the mobile previous gen equivalent, there’s an impressive graphics score increase of 48%.

Of course, these benchmarking programs aren’t the be-all and end-all of GPU performance, and we’re comparing a score averaged out against hundreds of different laptop/PC configurations against a single laptop benchmark. In fact, their reliability can be called into question when the desktop RTX 3070 performs a touch lower than both the RTX 3060 Ti and RTX 2070 with a score of 10,080, but this could be due to a low sample size with ongoing stock issues.

This is RTX 3060 Mobile. but GPU clock seems like 1700~1900MHz
And, considering CUDA difference between Desktop and Mobile variant, I think it is ok to consider GPU score is similar with Desktop RTX 3060 12GB
🧐 https://t.co/eDVBunCbRM

Until we see more of their real world performance in games, we can’t truly compare them to their desktop counterparts. It’s looking promising, however – at Nvidia’s CES keynote, we saw a Razer Blade 15 with Nvidia’s flagship RTX 3080 mobile GPU running the new Microsoft Flight Simulator on a triple screen setup without any hitches.

Still, these new mobile cards are potentially a big improvement over the previous generation – if you’re looking for the best gaming laptop this year then an Ampere-equipped laptop looks to be a brilliant choice.