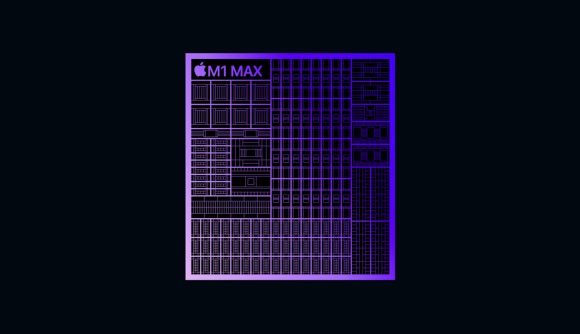 The GPUs found in the best gaming laptops, both discrete and integrated, have substantially improved over the past several years, and offer respectable gaming and productivity performance compared to their desktop equivalents. However, Apple has changed the game when it comes to productivity performance with the latest iterations of its M1 SoCs, particularly the M1 Max, which the company claims can trade blows with and even outperform Nvidia RTX 3080 graphics cards.

The M1 Max consists of ten CPU and 32 GPU cores, with 64GB of unified LPDDR5 RAM, all contained within a single SoC. It’s important to note that the M1 Max is an ARM based chip, whereas all the best gaming CPUs from both Intel and AMD are based on an x86 instruction set, which makes performance comparisons partially indicative of ARM’s potential advantages over processors designed with x86. This is all the more exciting when you consider Nvidia is looking to make its own ARM chips to rival Apple, AMD, and Intel.

At its most recent Apple Event, the California tech giant showcased benchmarks that show its new M1 Max is capable of delivering the same “relative performance” as integrated and discrete graphics solutions, in “select industry-standard benchmarks”, while exponentially increasing performance per watt.

In comparison to the RTX 3080 found in the Razer Blade 15 Advanced and MSI GE76 Raider laptops, Apple claims the M1 Max delivers the same level of performance while using 40% and 100W less power, respectively. More impressively, however, is the chip’s supposed ability to maintain this level of performance while running on battery power, whereas the RTX 3080s in the aforementioned laptops perform 2.5-3.3 times slower than the M1 Max.

As with all benchmarks provided by manufacturers, this data should be viewed with a fair amount of scepticism. Additionally, native macOS ports of AAA titles are few and far between compared to Windows, or even Linux. So, while the M1 Max, on paper, looks like it rank among the best graphics cards for laptops, it shouldn’t really be considered by anyone whose priorities are gaming first and productivity second (especially if you’re spending $4,000 USD).