The Nvidia RTX Super laptop GPUs are coming soon and a minty fresh leak points to the RTX 2070 Super graphics silicon being, on average, around 50% faster than its erstwhile RTX 2070 brethren. We’ve managed to dig up an internal performance slide showing the relative frame rate deltas of the top two new laptop graphics cards, the RTX 2070 Super and the RTX 2080 Super, against the rest of the existing GeForce generation of mobile GPUs.

Except one. Strangely there’s no mention of the original RTX 2080 card, so there’s no relative performance listed for the previous top notebook chip, but maybe that’s because it would sit right alongside the RTX 2070 Super. If Nvidia is following form with its desktop cards the RTX 2070 Super will be running the same TU104 GPU as the old RTX 2080, and that means they’d be pretty much on par in the performance slide.

The RTX 2080 Super card looks like over 50% quicker than the RTX 2070 Super, especially when you take into account the DLSS feature of the ray traced games the performance figures have been pulled from. Previous leaked slides have shown the potential RTX 2080 Super running with a 150W+ TGP, which would possibly explain the extra performance on offer.

This latest slide has come from our own anonymous sources, and looks to be part of a release kit going out to notebook manufacturers. That means the actual on-shelf date for the machines themselves can’t be far off now either, which falls in line with the rumoured March 2020 release date that has been previously speculated on. 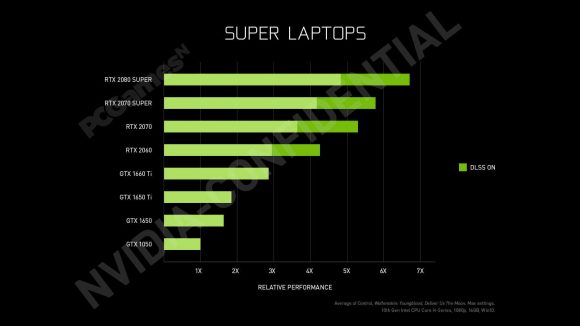 The performance benchmark being used is an average result pulled from a mix of Control, Wolfenstein: Youngblood, and Deliver Us The Moon, all running at max 1080p settings. This is just giving us the relative performance boost the Super cards will offer under ray traced settings, but that speed bump should still be translatable to standard gaming frame rates too.

It looks like the RTX 2080 Super and RTX 2070 Super are going to be the vanguard of this mobile Turing refresh, but the prior leak has pointed to an RTX 2060 Super as well as 16-series Super cards getting an outing too.

The other interesting thing to note from the slide is that it’s yet more confirmation that Intel Comet Lake 10th Gen H-series processors are soon to hit our laptops too. The relative benchmarks were run on an unnamed 10th Gen chip, though our source was saying that it’s an i7 CPU, with 16GB of RAM and using Windows 10.

Just in time to go up against some new AMD-powered notebooks, such as the super-shiny eight-core, 14-inch Asus Zephyrus G14. Though that’s a machine which is going to have AMD and Nvidia sitting side-by-side under my new laptop keyboard.