Graphics card stock has been in disarray for over half a year with no sign of stabilising any time soon. Both Nvidia and AMD state that they are unable to keep up with the unusually high demand, but even when stock does reach stores, scalper bots are at the ready to buy out the best graphics cards and resell them on sites like eBay and StockX for inflated prices. As you can imagine, it’s been hugely profitable for those that swipe up the supply, making as much as $15.2 million.

Data engineer Michael Driscoll has been monitoring the situation closely, with his report (via PCMag) highlighting some pretty crazy statistics.As we’d gathered by looking at Amazon listings every day, it’s not just the RTX 3000 series being hunted by scalpers, as previous generation cards haven’t been safe either. In fact, all Nvidia generations going back to the 900 series have been selling for more than 33-100% of their prices before the RTX 3080 launched back in September 2020.

Across eBay and StockX, there’s been a total of $61.5m resales of Ampere cards, and it’s not just the scalpers that are benefiting; Driscoll calculated that eBay, Paypal, and StockX combined made $6.8m in sellers fees attached to scalper listings.

Driscoll calculated that the median prices of Ampere cards over time shows no sign of inflated prices dropping any time soon, and with both AMD and Nvidia suggesting stock will continue to be an issue for a few months, that seems likely. 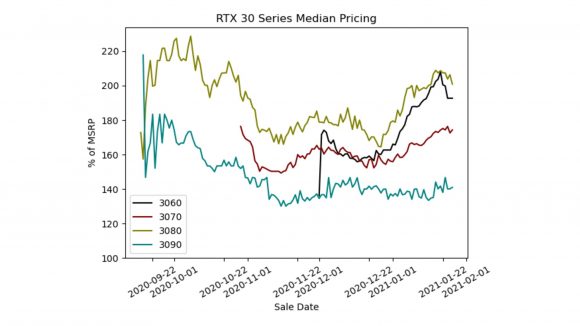 The RTX 3080 by far made the biggest profit for scalpers, with $6.3m made for scalpers, and being sold for an average price near double its MSRP; $1300, compared to the release price of $699.

So we really wouldn’t recommend blowing money on these scalper prices. If you can hold out with your rusty old GPU for a few more months, you’ll be able to get a much better deal. Or you could have your F5 button at the ready for the launch of the RTX 3060 next month…