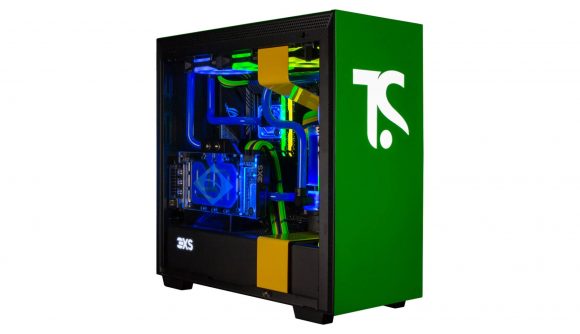 In an effort to help SpecialEffect with its mission to make videogames accessible to everyone, Chelsea FC football player Thiago Silva is auctioning off a custom watercooled gaming PC he designed with Nvidia and UK retailer Scan Computers. Nicknamed the ‘Thiago PC’, the rig’s adorned with the green, yellow, and blue colour scheme of the Verde-Amarela Brizilian National Team and features the player’s signature front and centre, making it one-of-a-kind.

The system even gives our best gaming PC a run for its money, packing an Nvidia RTX 3090, AMD Ryzen 5950X, 32GB of RAM at 3200MHz, and a 2TB NVMe SSD. If it wasn’t enough to stack the best graphics card with the best gaming CPU around, at least until Intel’s 11th generation launches later this month, they’re both watercooled, which should boost fps.

Bidding is already under way on Ebay and will last a total of ten days, meaning you’ll have until March 21 to put in the winning offer. The current bid sits at £2,150 (approximately $3,004) at the time of writing, and all proceeds will be donated to SpecialEffect.

“The funds raised will help us to make a life-transforming difference around the world for gamers with even the most severe disabilities, giving them a priceless opportunity for inclusion in social and competitive gaming communities, often as an equal”, says SpecialEffect’s founder and CEO, Dr. Mick Donegan. “The team here at SpecialEffect can’t thank you enough for your generosity.”