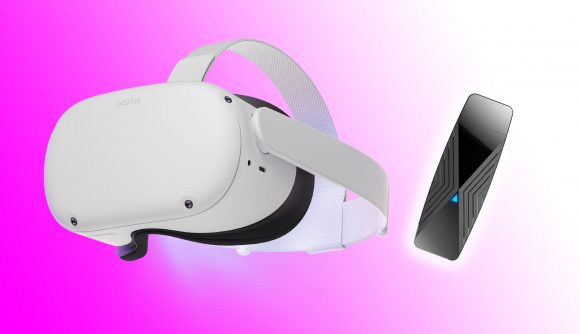 Meta and D-Link are reportedly working on a new Oculus Quest 2 wireless adapter, and it could enhance cordless VR gameplay on gaming PCs. Dubbed the VR Air Bridge, the device is allegedly based on an existing Wi-Fi 6 USB adapter, but it’ll provide a direct connection to the Quest 2, rather than using the cloud or your home network.

Spotted by software engineer ItsKaitlyn03, the Oculus Quest 2 wireless dongle gets a mention within a new driver, alongside its catchy full name – D-Link DWA-F18 VR Air Bridge (via Android Central). While a recent update improves existing Air Link functionality on the Quest 2 using Framerate Insurance (AFI), the VR Air Bridge could enhance VR streaming tenfold. In theory, it would do this by not having to share network space with other devices through a Wi-Fi router, as it’d cut out the middle man entirely with a two-way connection.

Meta hasn’t officially announced the existence of a dedicated Oculus Quest 2 wireless adapter, meaning the tech might just be an experiment for now. That said, seamless VR streaming sounds like it’d put the Quest 2 ahead of its competitors, especially since even the upcoming Sony PSVR2 seemingly won’t cut the cord.

The Oculus brand has been forced into retirement, but the Meta Quest 2 is still pushing ahead with regular feature updates and enhancements. The social media giant’s goggles are also still the most popular VR gaming device on Steam, but last month’s data suggests the Valve Index gained more new users.

Some enthusiasts may be waiting for future devices like the Oculus Quest 3 or Project Cambria, the subtle increase in Valve Index users suggests impatience. Brand new features like direct wireless streaming might help convince some PC gamers to invest in current hardware, but there’s a chance we’ll start to see Oculus Quest 2 uptake start to plateau.