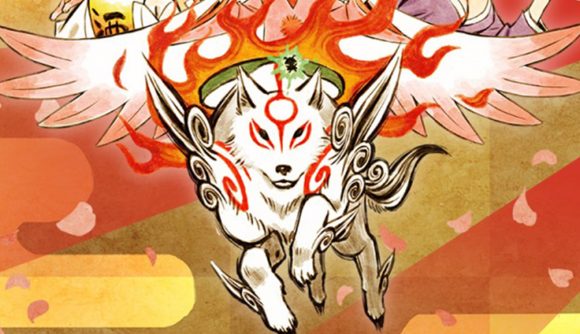 Okami is a great game, and one of the PS2-era Capcom classics that cemented the reputation of Clover Studio – whose staff went on to form Platinum Games. Now, director Hideki Kamiya says “Okami is going to be back” – but this isn’t the first time we’ve introduced him as a ‘Twitter troll’ in a headline, and while this is more likely than Mortal Kombat x Bayonetta, you should still take it with a grain of salt.

Kamiya appears alongside Ikumi Nakamura – whose first game industry credit was on Okami, but is now most recognisable as the former director of Tango Gameworks’ GhostWire: Tokyo – in a Twitter video. Kamiya gives a thumbs-up while announcing Okami’s return. Nakamura asks “really?” Kamiya confirms: “really.” Nakamura says “oh” and leaves frame. Everyone laughs.

While the apparent ‘confirmation’ of a new Okami probably isn’t entirely serious, it seems the developers’ desire to make it is. In the tweet itself, Nakamura says “we want to make Okami sequel and fans are looking forward to it too. You guys want to see Kamiya’s Okami again, right, everyone? I want to work on it too!”

The timing is certainly curious, as Capcom announced it has plans to revive dormant IPs in its latest financial report. While Okami did get a semi-sequel on Nintendo DS many years ago – Okamiden – a proper Okami 2 would certainly count as just such a revival.

Word is that there were talks with Capcom about reviving Okami back in 2015, but they fizzled out amid internal disagreements with Platinum president Tatsuya Minami – who has since left the company.

We won’t be adding Okami 2 to our list of upcoming PC games any time soon, but you can at least rest easy in the knowledge that the people who made the original want it back, too.