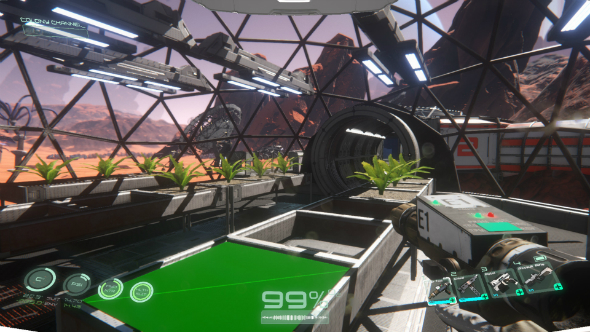 In my first day on Proteus II I died four times. Twice because I couldn’t figure out how to patch up the breach in my spacesuit – turns out you just use duct tape. I owe my third death to a giant space crab, so it goes. My fourth death, however, was something special. I ventured a mere kilometre from my life-supporting inflatable dome to the edge of a crater. The vista was magnificent, but after pausing for a minute to soak up every last facet of the crater’s abyssal terrain I noticed something rising out of the vista. It was a giant sandworm, and it was coming from the very brink of the horizon to gobble me up. I’d have moved, had I thought for a second that this wasn’t some visual effect developers Fenix Fire had added to spruce up the game’s skyboxes. Turns out that Osiris: New Dawn doesn’t have skyboxes.

Want more from the infinite beyond? Check out the best space games on PC.

Immediately, I’m forced to draw comparisons to its most notable competitor, No Man’s Sky. It’s not just me though: CEO and founder of Fenix Fire, Brian McRae can’t avoid the comparison either. “We have a lot of people who are extremely happy with what we’re doing,” reflects McRae. “We get lots of pats on the back, like ‘Thank you for making this game’, ‘This is the game I’ve been waiting for’. We’ve heard a lot of, ‘This is what I was hoping No Man’s Sky would be like’”. They’re both set in space and they both feature survival gameplay mechanics, sure, but while No Man’s Sky revels in the procedural power of algorithms and formulas, Osiris: New Dawn’s giant sandworm proves the importance of curation and direction. 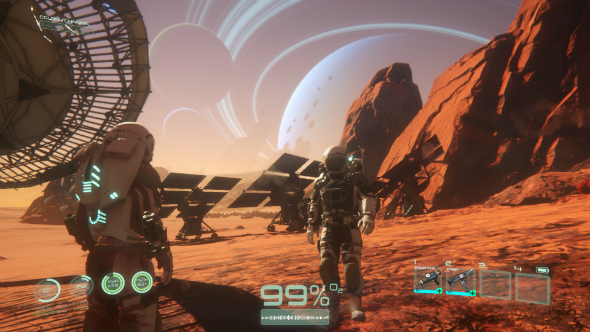 Procedural generation has become an essential tool for small developers with grand ambitions, but McRae insists its use has to be limited. “There’s very little procedural generation in Osiris: New Dawn, the planets are put together with more of an artistic brush,” he says. “It was a very conscious decision that we made, we saw what No Man’s Sky was doing and we knew that right off the bat they were going to go a mile wide and an inch deep with their gameplay. It was an amazing feat that they accomplished, but we just knew that you were going to feel very alone in that game, and you were only going to see slight differences from planet to planet. I’ve been a lead environment artist throughout my triple-A career, from when I was at Midway, to Blizzard and High Voltage. I know that once you go more procedural, you gain replay value, but you lose an element of direction and artistic guidance.”

Proteus II is made with a blend of the two techniques – McRae plots where the caves, valleys, craters and riverbeds go; the computer sorts out the rest. All the creatures are crafted from scratch, partly inspired by the sci-fi greats like Alien’s face-hugging arachnids and Dune’s chthonic sandworms, partly inspired by science. After all, Proteus II is a real planet – it’s the second moon of a gas giant called Thesius Prime in the Gliese 581B solar system. So while you’ll spot nods to Prometheus and Starship Troopers on Proteus II, you’ll also see creatures whose designs have been informed by the input of the astrophysicist who first discovered the solar system. 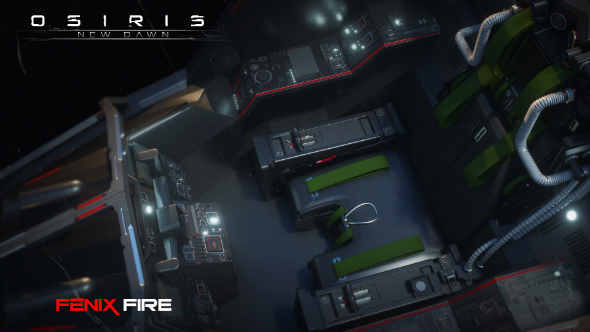 The same is true of the Proteus II itself. If you look around the desert planet you’ll see islands of floating matter, essentially asteroids suspended in mid-air. You’ll also see plenty of meteor showers too. “We wanted it to feel punishing: you’re on a planet that doesn’t care that you’re there. Space does not agree with you, it’s not going to cooperate. So we thought scientifically about the situation, and if you’re on a moon that’s next to a gas giant such as Thesius Prime – and this exists in our own solar system with Jupiter and all of its moons – you would have this crazy tectonic plate activity with all the pushing and pulling of all of that gravity on all of those moons. That’s why there’s all these floating islands on Proteus II, it’s all the matter that’s getting torn apart from the planet”, says McRae. As for the near-daily meteor showers that force you to seek refuge in your inflatable dome: they’re what happens when those drifting islands and boulders material finds their way back home. And by the way, the meteor showers are just as deadly as the giant sandworms.

All this goes some way towards explaining the ambition behind this project. The feature list for the game was inspired by interview questions that were levelled at Hello Games’ Sean Murray, which is why even in its Early Access state you’re able to get all your mates together in a rover and go alien-hunting or tame a giant crab monster and scuttle off into the sunset. 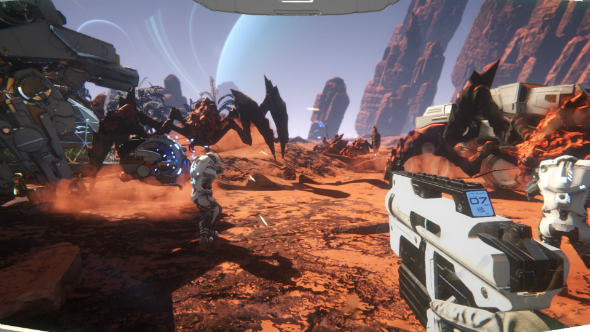 However, while Osiris: New Dawn has been remarkably well-received by players, it’s not without its critics, and managing expectations has proved difficult at times for McRae and his team. “We feel that we’re being judged the same way that a $60 million dollar project would be judged, and that’s unfortunate” he reflects. “In some ways it’s flattering because they’re looking at us in the same way that they look at triple-A projects. And that’s fine: we knew what we were getting into and we’re okay with it. We read and respond to almost every review, that’s why we’re in Early Access. We don’t know all the answers, and we want the relationship to be a two-way conversation at all times. If everyone gave us a 100% rating then we wouldn’t have any friction to take the game up another level. We need that to improve the game, and it’s going to be better for it”.

At the time of writing Osiris: New Dawn fits within the Mostly Positive bracket of Steam user review scores, with 77% of its total user reviews being positive. McRae wants that score to reach 80% in over the course of the Early Access stage. “Everybody gets negative reviews, and some of them are very passionate, but what I tell my team is that these people really want to enjoy the game, but there’s this one roadblock that they can’t get past for whatever reason. So if we can change that and make it work – and we’ve seen this before – that user who was upset with us then becomes one of our biggest fan and tells everyone about the game and how great the developers are”.

But despite the myriad hurdles that its Early Access status presents to new players, it’s nearly impossible not to fall in love with Osiris: New Dawn once you’ve seen the moments of wonder it’s capable of throwing at you. The crafting and survival mechanics might be a little too familiar, but clearly that’s not where the game’s lasting appeal lies. There’s something awesomely cinematic about this game, provided you can forgive its many rough edges. It’s a game about getting mauled to death by behemoth sandworms and racing back to your base before night falls and the real terrors of Proteus II come out to play. Completing the rest of the jigsaw puzzle is no mean feat, but McRae’s optimism and enthusiasm suggest Fenix Fire are up to the challenge.