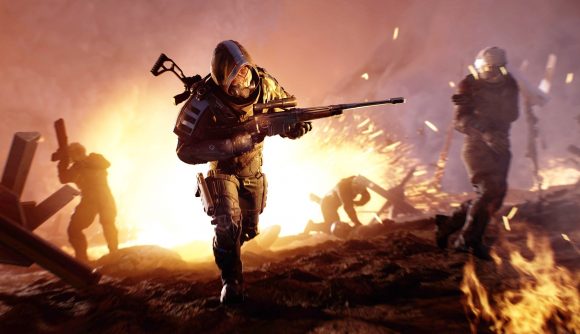 Outriders – the upcoming co-op loot shooter from People Can Fly, the studio behind Painkiller and Bulletstorm, and published by Square Enix – was previously scheduled to launch on February 2, 2021, but that date’s now been pushed back to April. Instead, we’re getting a free demo in February to help whet some appetites ahead of the proper Outriders release date.

“We believe it’s important that players get to experience a new IP like Outriders before release, so that you can decide for yourselves whether the game is something you wish to pre-order, purchase, or play,” the devs say in the announcement. “For this reason we’re excited to announce that on February 25, 2021 we will be publishing a free demo.”

That demo will include all four classes, and let you play through the first few hours of the game, alone or in co-op. Any progress you make will carry over to the full release of Outriders on April 1, 2021. (“No joke!”)

“We will spend this extra time fine tuning the game and focusing on delivering a fantastic play experience at launch.”

An important update regarding Outriders. pic.twitter.com/HHZrq5GIik

I’ve played and enjoyed Outriders during a preview event, and even I’ve forgotten that it was set to come out this soon. I suspect the sudden delay has more to due with the apparent lack of hype than anything else, and a demo is perhaps the best way to get potential players excited about a game.

I enjoyed Outriders quite a bit in my brief preview session, but there’ve been plenty of loot-driven action games recently which I’ve mostly enjoyed, but which ended up not having much staying power. (Hello, Avengers.) Here’s hoping Outriders can manage to stand out amid a slew of similar multiplayer games – you’ll be able to see it for yourself soon enough.