Outriders, the upcoming co-op shooter from Bulletstorm developer People Can Fly, is inching its way closer to launch. In fact, the Outriders release date is this year, scheduled for sometime during the holiday season after a delay announced in February. It’s a third-person sci-fi shooter that traces its roots back to Diablo more than Destiny, with several distinct classes to choose from before you embark on its 40-hour main questline.

People Can Fly has just unveiled another Outriders class, in fact. The Technomancer is a kind of magic-using class that can summon arcane weapons and automatic turrets out of thin air, and our writers Dustin and Ian had a chance to take it for a spin during a private session hosted by Square Enix. Here are their impressions, a week later:

Ian Boudreau: So, the first thing that should be said, I think, is that we were playing co-op, but remotely, on machines hosted by Square Enix somewhere in the Matrix, I guess. It worked, technically speaking, but I don’t think this was the optimal way to play Outriders. Visuals were a bit muddy and I had some noticeable input lag. How did things hold up for you?

Dustin Bailey: Obviously, this isn’t something folks playing at home will need to worry about, but yeah, the experience was less than optimal. I had stuttering issues that would occasionally turn the game into a complete slideshow – it was definitely a streaming problem rather than an issue with the game itself. 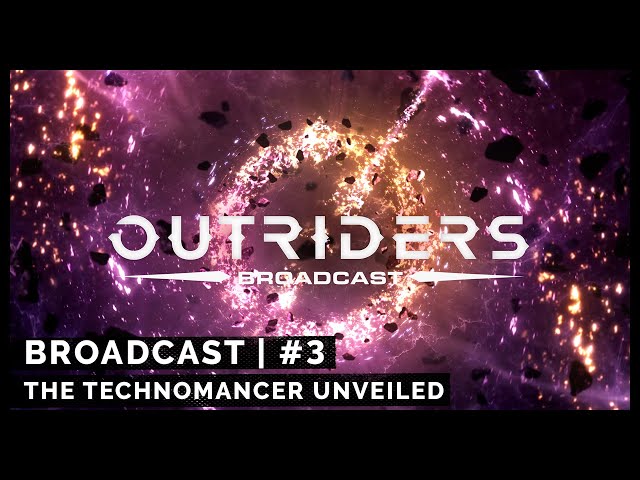 Remarkably, the game still felt super-snappy despite all that, with good feedback on the weapons and most of the crunchy detail you really want from a shooter. Outriders is certainly following in the footsteps of games like The Division 2, but it was taking me back to Gears of War. The enemies are spongy, yeah, but there’s a tonne of gory feedback to make you feel the impact of those shots regardless. A good finishing headshot with a sniper will do that Gallagher watermelon explosion that Gears perfected.

We found ourselves in a bloody, frightening future vision of a battle from the First World War

That said, this is still an RPG shooter. You can blow away weak enemies, but mid-tier soldiers and bosses will soak up just absurd amounts of damage. That’s fine playing in co-op, where you’ve got to strategise with your partners while whittling down these lengthy health bars over time, but I can see it being a real drag in solo play, where you’re going to have a more limited pool of abilities to employ while you just unload clip after clip into the baddies.

Ian: Playing solo, too, you’d miss out on the ability combos that I think we were popping off by the time we got to the end of our demo. This stuff feels really good – getting a magic bazooka shot off on an enemy your partner has just frozen or poisoned, or popping a group heal and getting your team out of trouble. Along with the weapon feedback you described, I got this feeling that Outriders was doing what I had hoped Anthem was going to, but didn’t quite manage. Still, bullet-sponge enemies are definitely a thing here, and those have caused a lot of consternation in both of The Division games so far. We’ll have to see how players react to the enemy health vs. damage balance here. 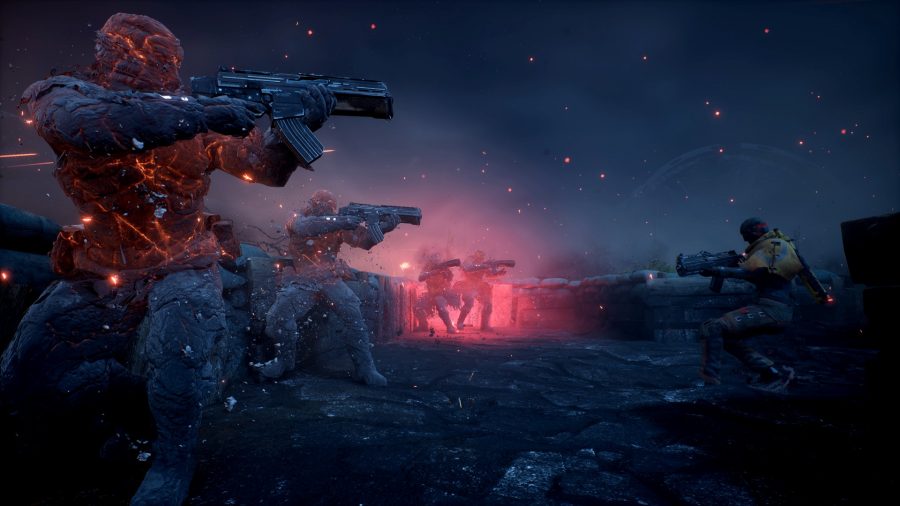 Another aspect that didn’t really come together for me until the end of the demo was the setting. We started out in media res, but my impression at first was that this was yet another drab, post-apocalyptic sci-fi world to rescue. That all changed after our final visit to Trenchtown – we popped out and found ourselves in a bloody, frightening future vision of a battle from the First World War, going ‘over the top’ amid gas clouds and tree trunks bombed to matchsticks to meet an enemy onslaught. I’ve never seen that done in a sci-fi game before, and that really sold me.

Dustin: It’s not just a cool look, either – it’s a fantastic encounter. You start at the bottom of a gentle valley and have to fight your way up, trench by trench, through waves of enemies, until you reach the fortified position at the top of the hill. It’s not filled with monster closets and infinite enemy spawns, either. As far as I could tell, every single enemy we fought was there from the very start of the fight, raining down (admittedly inaccurate) fire until we actually got close enough to engage with them. At one point, I sort of started sprinting up the hill to see if we could just brute force our way through, and drew aggro on a load of heavily-armored gunners, who then followed me back down the hill. (Sorry about that, by the way.) 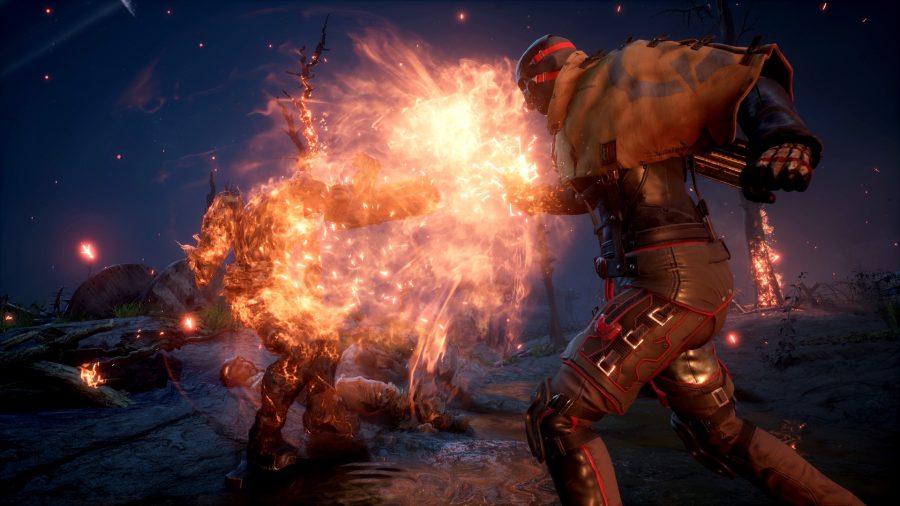 The battlefields feel really large and open-ended, even if they’re technically a lot smaller and more constrained than something like, well, Battlefield. Enemies are really good at flanking you and pushing back aggressively on your position – especially when big waves of melee enemies start rushing you halfway through a fight, as they often do. You’ve got no choice but to fall back at that point, and that really opens up the battles in positional terms.

You’ll take some ground, enemies will reinforce, you’ll lose ground, and have to take it back again.

A lot of cover-based shooters get into this rhythm of ‘Move forward. Take cover. Clear enemies. Move forward. Take cover again. Clear more enemies.’ The exciting thing about Outriders, for me, is that there’s a real push and pull with the bad guys. You’ll take some ground, enemies will reinforce, you’ll lose ground, and have to take it back again. That makes the encounters feel so much more dynamic and exciting than they do in a lot of the types of games Outriders is drawing from.

Ian: Yeah, I agree completely. It’s funny – The Division 2 is the more ‘realistic, grounded’ game, but I felt so much less like an unstoppable badass in Outriders. It’s all down to that dynamism and the knowledge that you could actually be overrun at any point if you’re not paying close attention. We went on a quest at one point to take on a boss called the Broodmother, and there was almost constant pressure on us no matter where we were firing from thanks to the melee adds she had with her. It was a tough fight, but what I think made it work was that it really felt like a fight. 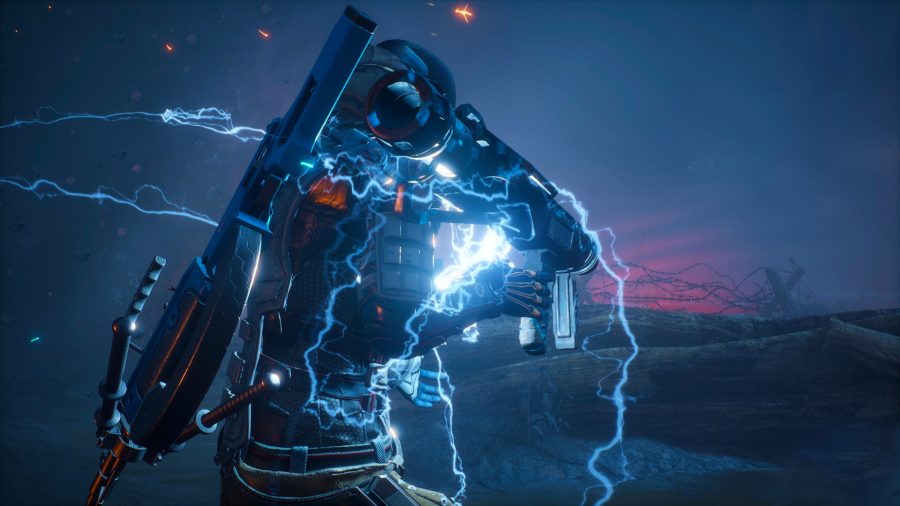 I’m interested to see how the different weapons and character builds work in the full game. We had the chance to spec out our Technomancer characters with a big pool of points at the beginning of the demo, and I have to be honest and say I didn’t spend a lot of time thinking about what I was doing. But it seems like you wound up with a tanky character that could handle being pretty aggressive, while mine wound up feeling more like a support class. Once I got a handle on what my abilities were, I liked having a mix of offensive and healing abilities that could help the rest of the team. Does the RPG chunk of Outriders work for you?

Dustin: That’s the part that’s toughest to address in the context of a roughly two-hour preview session – it’s just not enough time to properly feel out what those damage bonuses, elemental combos, and health buffs are going to add up to. I can say that I’m now sitting here thinking about what other skills I could’ve chosen and what other abilities I could’ve used, and how that would affect the sticking points here and there in combat. That certainly speaks well of Outriders’ depth from an early perspective, at least. 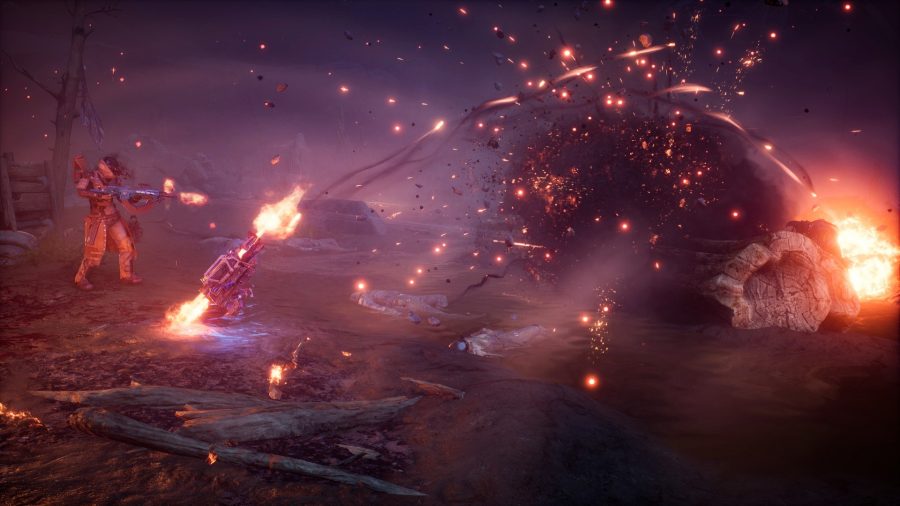 My early inclination when spending those skill points were ‘health’ and ‘poison’, so yeah, I went real tanky, soaking up damage while slowly bleeding away the enemies with toxic drains. A couple of the abilities I had felt really flat to me – I couldn’t get a good handle on the grenades, for example – but others really stood out.

I like the fact that even playing the same class, we wound up with such distinct roles

I loved the toxic turret that kind of just vomits sludge at nearby baddies. It has its own health bar, so it works as a sort of decoy to draw enemy fire for a bit, too. You can aim those abilities, so if a group of gunners are holed up in a small room, you can toss that turret in through a window, then watch every single one of those enemies get poisoned, scatter, and abandon their cover in an instant. In the bigger melee-focused encounters, like that Broodmother battle you mentioned, my turret-heavy build almost made me feel like I was playing Orcs Must Die. It was basically tower defense plus shooting, and I want to know how different other classes with other builds are going to end up feeling.

Ian: I know I felt a lot squishier, and (eventually) learned to keep a few paces back from the front lines – but I still could pop down a turret or lay mines to create some distance in emergencies. I like the fact that even playing the same class, we wound up with such distinct roles. 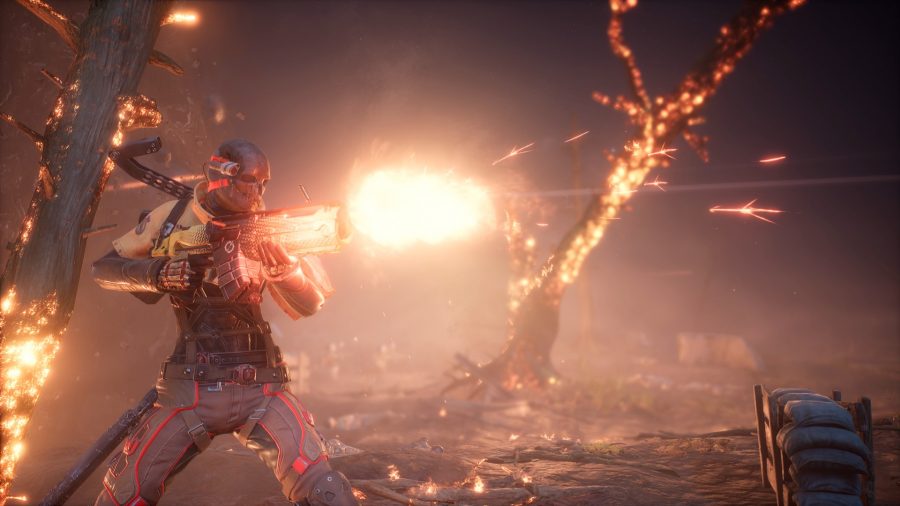 Talking about this demo has me excited to play Outriders again. Going in, I didn’t have a ton of interest in it or even awareness about what it was – there are so many games right now! – but after playing that couple of hours, I definitely want to see more. I guess that means the demo did its job, right?

The power of teamwork: Here are the best co-op games on PC

The good news is that Outriders will be coming out later this year – Square Enix hasn’t set a specific release date yet, but has committed to launching on both Steam and the Epic Games Store during the holiday season. You can also rest assured that Outriders won’t be asking you to pull out your credit card more than once – People Can Fly has said there will be no microtransactions in Outriders.

Check out our guide to the best Outriders classes if you’d like to learn more about your character options before launch.