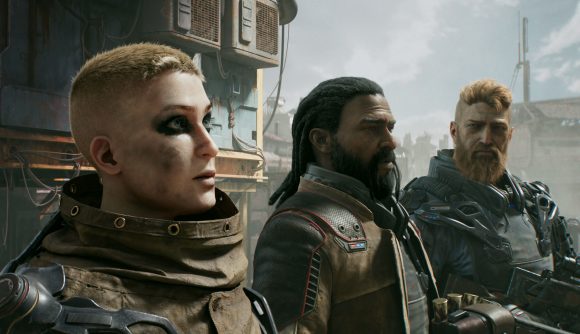 October 8, 2020 Square Enix has announced the Outriders release date is set for February 2, 2021.

Bulletstorm developer People Can Fly’s new shoot ‘em up, Outriders, now has a firm release date set. It’s been delayed out of the 2020 holiday season to February 2, 2021, according to a new post on the Square Enix blog. The original launch had been pencilled in for this summer. Speaking to PCGamesN, studio head Sebastian Wojciechowski explains that the developer thought it was wise to release the new game just after the PS5 and Xbox Series X launched, rather than just before.

“There is always a publishing schedule, and there’s always a schedule for hardware launch, so we had to feed into this,” he tells us. “The good thing is that we agreed with Square [Enix] that if you want to launch a brand new original IP, it’s always better to do it with the next generation of technology.”

Fairly normal stuff, then. Based on our Outriders impressions we’re more than happy to wait. There’s plenty of People Can Fly’s history in its new dark sci-fi game. Fans of Gears of War will feel at home darting from cover-to-cover, and if you like Bulletstorm then you’ll likely appreciate some of the dark humour.

There’s plenty that’s new, too. The Outriders classes invite you to play out power fantasies of being a hoping assassin, or an, ahem, twisted firestarter. As enemies hit the deck, you’ll also pick up new bits of loot. The more you do so, the more your character changes appearance. If you detect a Diablo influence, then you’d be right. People Can Fly were quite taken with Blizzard’s dark and loot-filled world.

If that’s not enough to sway you, then maybe you’d like to know that Outriders microtransactions won’t be a thing, and this won’t be a games-as-a-service title, either. Plenty of other shooters like Destiny 2 and The Division 2 have opted to combine looting, shooting, and seasonal plans. People Can Fly, however, opted for a more traditional approach akin to old games.

What’s not old school, however, is the fact that Outriders will feature full cross-play between consoles, PC, and Stadia. Console owners who buy the game on PlayStation 4 or Xbox One will get a free upgrade to the next-gen version. And if you’re on PC, you’ll be able to play on either Steam or the Epic Games Store (or both, if you want, what the heck).

We know that waiting isn’t easy though. That’s why we have a list of new PC games to keep you busy. If you’re curious about other upcoming PC games that are a bit closer in terms of release dates, we have something for that, too. If you just want to ruddy shoot something, then maybe you should head over to our list of the best FPS games on PC – we reckon we’ll be adding to that list come the holiday season.