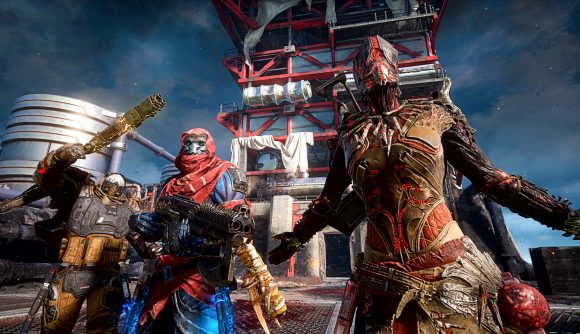 What's the worst thing that could happen to a looter shooter fan? You'd imagine it would be all their hard-earned weapons and armour vanishing without a trace. That's more or less been the case with Outriders since the game launched, with players' inventories seemingly being wiped when the new PC game crashed during an online co-op session. Following a patch last week, Square Enix is confident that the bug has been squished, so now we're talking about those lost items of yours.

In a post on Reddit, a Square Enix representative explains that items granted will have the exact attribute combinations but with “God Roll values”. If you're curious what that means, your items will be, at least, the same if not better quality than the ones you initially lost. Gear will also be granted at your character's highest available equip level, with World Tiers and Challenge Tiers being considered.

Basically, this considers that you'll likely be at a higher level now than you were when the bug wiped your stuff. So, if you were on World Tier 2 and are now on World Tier 8, you can expect your weapon to still be helpful to you.

Square Enix has also placed players into groups to organise how people will get their stuff back. Most of you will likely be in Group A if you have an “unplayable character with an invalid inventory”. If you don’t have an invalid inventory but have lost gear, you’ll be in Group B. Group C, meanwhile, is for people who have been unaffected by the bug.

If you’re in Group A, all of the items you had equipped at the time of your inventory wipe will be restored, regardless of rarity. Fully completed Accolades will also be restored if you previously reached the final tier of it. Interim tiers and progress towards any tier of an Accolade, however, can’t be recovered. Those of you in Group B will get up to 20 legendary items that were in your inventory, alongside fully completed Accolade tiers.

So, when is this item restoration kicking off? Square Enix had hoped to provide an exact date for this already, but the publisher needs more time to make sure everything is running smoothly.

Loot ’em up: You can buy Outriders here

“When running operations of this scale on our database, we want to ensure that there are no instances where a restoration could have a continued significant negative effect on individual players, or the population as a whole,” the post reads. “Nevertheless, we are working to an ‘ASAP’ schedule and fully understand how disappointing it is to not yet have your items back today”.