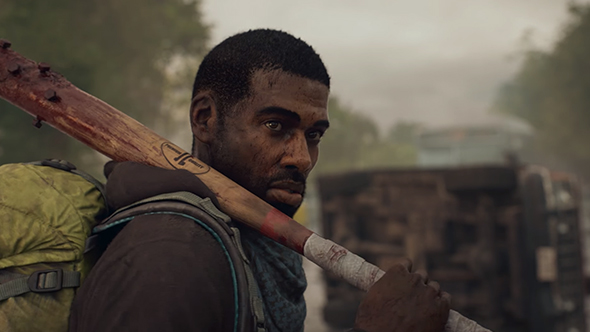 Update, December 11: The countdown didn’t get us to a full unveiling, but now we now Overkill’s The Walking Dead will release fall 2018 and we’ve gotten a look at Aidan, the first playable character.

The first trailer in three years for Overkill’s The Walking Dead was released yesterday, showcasing the first of the game’s playable characters. Aidan is hanging out in everyday Washington DC, annoyed by the mundane pressures of everyday life. Then zombies happen, and he seems a lot happier wielding a blood-soaked baseball bat. It’s all CG, so it’s not quite the full gameplay reveal we were hoping for. Aidan uses a car horn to attract his zombie prey, so you might infer that sound will play a role in the game, true to the comics.

Check out the best zombie games on PC.

In addition to the trailer, Overkill also released a studio tour introducing the team working on the game. Notably, the developers strongly emphasize the story, campaign, and missions throughout this video, suggesting a pretty strong narrative focus for the game. In fact, “narrative” will be the subject of the next studio tour. As a four-player co-op shooter, we expected The Walking Dead to be pretty similar to Payday, which features a fairly loose story tying everything together, but it seems we may be getting a more substantially connected campaign here.

Aidan and the other three playable characters will all have their own unique abilities and skill trees, and it seems the game will support both stealthy and guns-blazing playstyles. Slightly more specific than the previous “late 2018,” Overkill’s The Walking Dead is set to release in fall 2018.

Original Story, December 8:It’s time for your semi-annual update on Overkill’s The Walking Dead, a game that’s been sufferingyearly delayspretty much from the start. If you missed out on any of those announcements, this is a co-op survival horror shooter set in the world of Robert Kirkman’s comics – unless something significant has changed, which given that three years have passed since the initial announcement is entirely possible.

But we’ll likely soon find out what shape the game is taking this Sunday, as the game’s official website now hosts a countdown recording the seconds until December 10 at 12:00 PT / 15:00 ET / 20:00 GMT. The site features an image of the US Capitol Building, and the countdown has been promoted on social media with the line “Washington is about to fall,” so expect some sort of DC-driven destruction.

We’re most likely finally getting a full reveal of what the game will look like. Coming from the developers of Payday we’d expect something in a similar lineage, but we’ll soon find out for sure. Almir Listo, brand director for publishers Starbreeze, says this event will unveil what they’ve been working on since Payday 2 – so if you’re thinking this might just be some tiny tease or cross promotion, you can dial back the cynicism.

It will be good to finally have some more concrete detail around Overkill’s The Walking Dead, since the name has by now been floating around so long that it no longer has meaning. Remember that trailer that’s embedded above? Released August 13, 2014, saying that “in 2016 Washington will fall.” Washington has proven hardier than anyone expected, I guess.