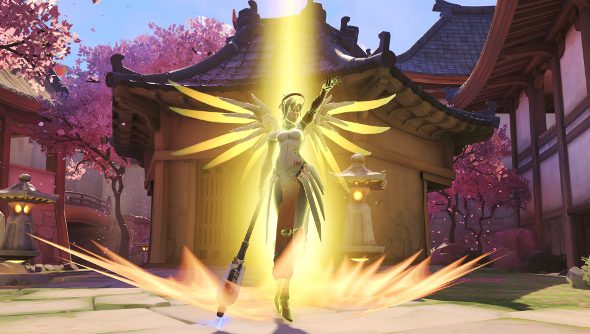 Blizzard’s got another Overwatch character preview to show off, this time it’s the angelic healer, Mercy. She’s nippy, has a neat staff, and she can fly – what a handy lady to have around.

Take a gander at Mercy in action below.

Mercy’s got five abilities: her staff, her gun, flying, slowing descent and resurrection.

The Caduceus staff allows her to both heal and buff her allies by firing beams at them. Healers do love their beams, as this seems to crop up everywhere: Team Fortress 2, PlanetSide 2, Evolve, and those are just off the top of my silly head.

Her gun is just a gun. A slightly crappy sidearm that’s an emergency backup plan.

Then she’s got her wings. Her Guardian Angel ability launches her toward a targeted ally, while Angelic Descent lets her slow her descent as she falls.

Resurrect is self-explanatory. Mercy brings the dead back to life. All nearby allies are resurrected, and they come back with full health.

Blizzard also showed off Overwatch’s robo-monk, Zenyatta, a couple of days ago.