What are Sojourn’s abilities? Sojourn is one of the brand new Overwatch 2 heroes that is making her playable debut. It’s still quite early to determine everything about the game, including the Overwatch 2 release date, but unlike Echo who made her debut as the last Overwatch hero to join the original game, Sojourn is exclusive to the sequel.

While she was an original member of the Overwatch team back in its heyday, and was one of the former members recalled by Winston, she didn’t end up rejoining until Null Sector’s attack on Paris. Sojourn’s abilities as a DPS focused hero are potentially powerful and certainly formidable. We’ve only seen hints as to what some of her abilities can do, and we don’t know what her Overwatch 2 talents are yet, but there have been hints about her character in the revealed gameplay and just how powerful she could be.

So join us as we go over all of Sojourn’s abilities in Overwatch 2 and what we know about each of them, as well as other gameplay tidbits that we’ve noticed from the gameplay reveal.

What are Sojourn’s abilities?

Sojourn is a DPS focused character, so many of her abilities are used to deal significant damage to enemies. She has the average health bar of 200HP, but can quite easily do more than that against stronger foes, if she’s allowed to get carried away. 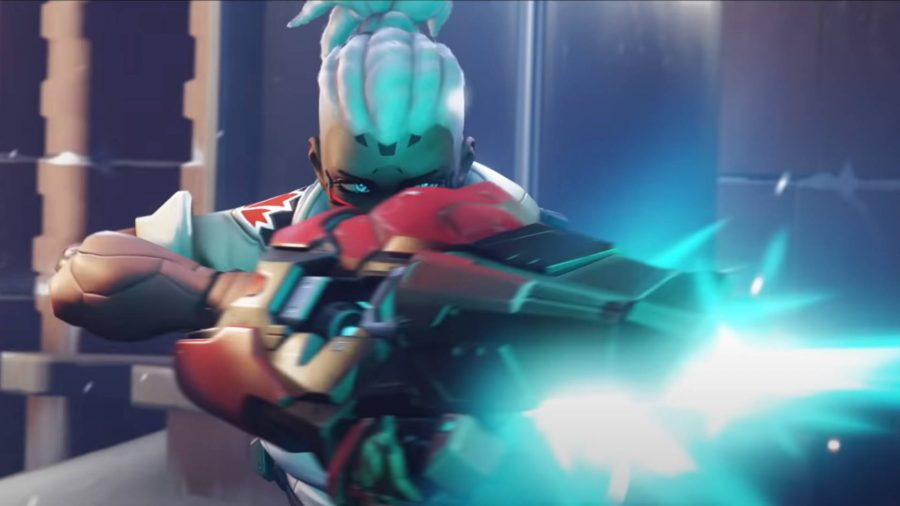 Sojourn’s primary weapon is a rapid-firing energy rifle that has 40 rounds per clip. The number of bullets remaining in the chamber is handily displayed on the gun itself. Each bullet will inflict between five and eight damage. It also has a relatively quick reload time, so you’re not stuck fumbling around while changing magazines.

Sojourn’s energy rifle also has a secondary fire mode that’s a railgun. By holding the right mouse button, you can charge up a shot, indicated by the bars that appear on the HUD. You don’t have to wait for the two bars to be fully raised to fire off a shot, but you’ll get more power from a fully charged railgun. Firing Sojourn’s primary weapon at enemies or barriers will also charge up the railgun and any critical hits provide a significant amount of railgun charge.

The railgun will maintain its charge too, capped at 100%. It doesn’t seem to consume any ammunition when fired, but the charge amount does reset. While it’s not confirmed, there is speculation that the railgun can penetrate barriers.

We didn’t get to see this in-game, but the gameplay reveal has Sojourn slide along the ground. She uses boosters in her calf, knee, and back to propel her forward. It seems that she can fire her primary weapon while sliding, and there’s no reason why her railgun wouldn’t work here too. In her sliding state, Sojourn looks to be moving in a forward direction while crouching, so she will be harder to hit, but will have predictable movement for a short time. She may also be able to use this while jumping as a dive kick, as seen in the cinematic video.

Sadly, we didn’t get to see this ability at all during the entire reveal, but there are some clues as to what this ability might be. Its icon shows an explosion of sorts with arrows pointing around the explosion. The only thing we’re confident about is that the current cooldown for this ability is roughly around 12 seconds long, since the HUD shows the ability is halfway through recharging with six seconds remaining.

Sojourn will glow turquoise, causing her railgun to charge at a greatly accelerated rate. It does not require Sojourn to fire her weapon to charge, and it will be fully charged in less than a second. It’s unclear if this ultimate does anything else, like buff nearby teammates, or if the shots themselves deal extra damage.

And that’s everything we know about Sojourn’s abilities in Overwatch 2. There are plenty of new and returning characters who have yet to be revealed for the upcoming game, as well as new PvP and PvE modes. We do know that Echo is another Overwatch hero that’s coming to the sequel, and it’s likely her abilities will be similar to the ones found in the first game, so why not check them out!