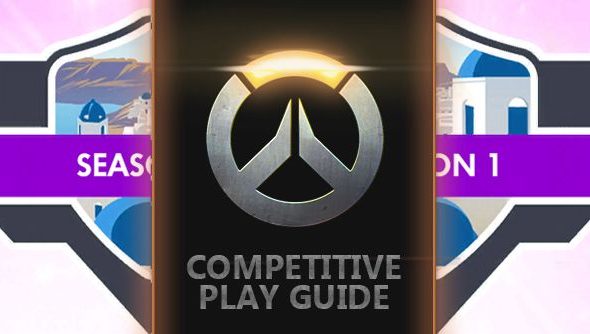 Overwatch’s competitive mode has deployed out of the public test realm (PTR) in patch 1.0.5, giving everyone a chance to prove how good they are.

What you’ll need to win are the best Overwatch characters, natch.

If you’ve found yourself pleading with team members to abandon their triple-sniper comp and push the objective only to be told to “chill dude, it’s just a game” by an inebriated teen, this will be good news for you.

While Overwatch can be a bit of a chaotic scrum at times, working together for the win as efficiently as possible is almost a completely different game. So here’s a run-down of how Competitive Mode works and how to get the most out of it.

First of all, it’s important to note what you’re playing for here. Obviously, there are bragging rights involved, but Blizzard have gone so far as to convert this into a numerical value.

Once you’ve hit level 25 on your career profile, by which point you’ll be several hours into the game and have a decent understanding, Competitive Mode unlocks. After your first ten placement games in Competitive Mode (which appears as a separate option alongside Quick Play, Practice and Brawl) you’ll be given your calibrated skill rating.

This rating, a value between 1 and 100 where higher equals better, is separate from your level and is used to matchmake against opponents of a similar skill level.

After your placement games, every victory or defeat from then on increases or decreases your rating. Additionally, victories will earn you Competitive Currency (again, separate from standard Credits) which you can use to unlock those fancy golden weapons you’re seeing for different characters.

Once you climb to the top of the ladder, if you are in the top 500 players on PC you’ll receive a notifaction certifying you as an absolute god. This leaderboard will activate at some point deep into the season and you can lose your spot as others enter that elite 500.

At the end of each season (roughly two-and-a-half months in length, the first ending August 18) you’ll receive a special themed profile picture and animated spray, the first in the game based on Ilios. Chances are these will be repeated with different maps for upcoming seasons.

So, now you know what you’re playing for, let’s look at how you actually play for them.

Competitive matchmaking is as simple as queuing for Quick Play, regardless of how many of you are in a group, albeit with some much harsher penalties for leaving an ongoing game. Team members who leave are not replaced to avoid someone queuing into an automatic derank, so disconnecting causes a 60-second timer for the player to reconnect before it’s safe for the entire team to leave.

Other than that, you’ll recognise the gameplay from your usual pub queues, and just like Quick Play there’s currently little choice over which map you’ll be playing.

The way maps work, however, has been structured to provide a definitive win/lose scenario for each team. That means that each team will swap roles after the first game so they get an equal chance at attacking- or defending-favoured maps, if you’re not on a Control (king of the hill) type map – which is now best-of-five.

The other map types have rules to determine who wins in the event of stalemate situations, i.e. the defense hold out until the timer expires. In both Payload and Hybrid matches, the cart tracks distance pushed to hundredths of metres, meaning if defence holds out there is a definitive distance to beat.

This manifests when roles switch over as a glowing rectangle on the ground which makes it easier for the new defenders to see where they absolutely have to stop the cart from getting to (as well as acting as a permanent reminder of your team’s common shame). If both teams complete the push, or fail to capture the first objective in Hybrid, Sudden Death occurs. 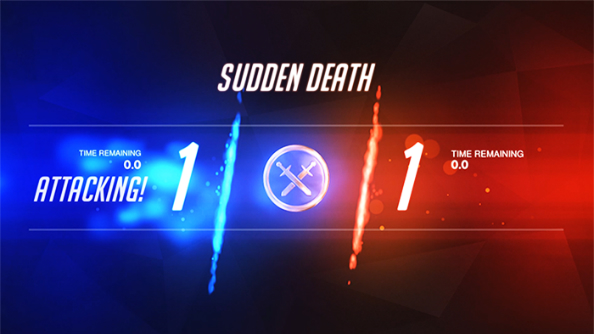 Sudden Death has been something Blizzard struggled with throughout Competitive development, and is the most likely thing to change in the future. In the final 1.0.5 release of the mode, Hybrid and Escort do not follow the new time-based rules for Assault, but will swap in the Fall season.

For Assault, each capture point gives a point to the attackers, and the team with the most points after playing on both sides wins. This, however, gives rise to a highly likely scenario where each team ends up with the same number of points at the end by virtue of both teams eventually capturing the final point.

Blizzard’s tie-breaker solution has been to reduce the amount of time you have for the round, as well as using your remaining time from the attacking portion as the basis for your total time in a final deciding round. If a team only managed the capture in overtime, with no time remaining on the clock, they do not get an additional round. But if they had fewer than two minutes on the clock, they get bumped up to two minutes at the start. If this final roundstill results in a tie, Sudden Death starts.

The current scoring system is a balance between a so-called Stopwatch mode, which could be used as a tie-breaking metric in the event of a draw, and avoiding stale metas. The reason for this is to prevent cheesy fast-push strats from being the only viable team composition in competitive, which I can kind of get on board with.

The problem is that this results in a final tie-breaker round having to be played with one team on defence and the other on offence, thus affording one team an advantage as no multiplayer map can ever be perfectly balanced for each side (unless it’s de_dust2).

The Sudden Death tie-breaker is something Blizzard have said they’ll be hopefully ditching for the Fall season, so don’t get too used to it. For now all you need to know is if the game thinks you do better at attacking/defending than your opponent, you win. And that means playing the objective.

How To Win at competitive Overwatch

As a result of ranks and egos on the line, people in Competitive will be far more inclined to want to win games. This has a double-edged effect on your team. Firstly, people talk to each other far more than in Quick Play. They’ll discuss team composition options beyond the usual “we need a better Reaper/Widow/Tracer/literally any character” flames you see often, and be more willing to find synergistic combinations.

However, it also results in a lot of tense team-mates lashing out if things aren’t going well and their rank is on the line. Most online competitive games call this toxic behaviour, and if it really does go too far, just hit mute and use this more talkative atmosphere to try more positive interactions like calling things out, letting your team know what you or the enemy are doing. Information is really hard to digest on the battlefield but absolutely essential to victory.

If important things you can’t see are relayed to you, or by you, then your team has a better chance of delivering a final push or fending one off. Important information ranges from sniper or turret positions, to the status of your own or enemy ultimates.

On the chat wheel there is an option to let your team know your ultimate status, so you don’t even have to use your voice if you’re shy. Spam it whenever your ultimate hits charge, or if a team-mate (like Zarya) lets you know theirs is ready and yours needs just a couple more percentage points, so they don’t waste a good set-up.

And speaking of set-ups, that all-important team composition matters all the more when you’re playing against people also trying their hardest to win.

If you’re unfamiliar with competitive games, a metagame (or meta) evolves as trends in power balance shift. This can be due to actual balance changes, alterations to heroes’ abilities, or something akin to fashion: if a pro team shows off a particular strategy that others replicate, for example.

Currently, there are a few loose rules governing the meta of the 1.0.5 patch. Obviously player skill has a far greater impact than which heroes are considered “stronger”, so if you’ve got Geguri the teenage Zarya prodigyon your team, try not to flame her for not picking Reinhardt or D.va.

In general, Reinhardt and D.va are more useful tanks given their reliable team damage soak abilities (as opposed to Zarya’s minuscule two seconds out of every 10). Roadhog is a bit of a liability as the other team can farm ultimate charge off him ridiculously fast as they do health damage, rather than barrier damage or simply having shots absorbed by Defense Matrix.

It goes without saying that every team needs a healer, so Mercy or Lucio are compulsory though there’s not too much consensus on which is better. As a rule of thumb, if Mercy has someone to pocket for extra damage (Pharah or Soldier: 76) or consistent heals (Reinhardt or D.va) then go for it. But if your team is more disorganised, or mobile, Lucio gives a greater deal of freedom and much more ability to sustain everyone, especially while pushing the payload.

Defensive heroes, like Mei and Junkrat, are useful on Control maps to, well, control the space around the point more effectively. Walling off one entrance before being pinsered, or setting traps to catch a flank. Snipers are useful on both offence and defence, though only one is really required, and the extra vision given by Sonic Arrow or Widowgoggles can help with shot-calling.

In general, with more communication and co-ordination, turrets are less useful on defense as they are quickly focused or avoided by a team acting as one. Bastion and Torbjorn don’t really have much use then, but Symmetra’s mini-sentries can work well as area denial or at least early warning markers of enemy position. Plus teleporters are extremely useful on Assault defence where the first point is very far from spawn.

Most importantly, try to adapt your team to counter theirs. You can find a full breakdown of counters for whichever hero is giving you most trouble on sites like OWFire, and other resources like OverBuff and MasterOverwatchcan help you keep track of evolving win rates.

But always remember: it’s a team game, so work together and you’ll be flying up the ranks in no time!