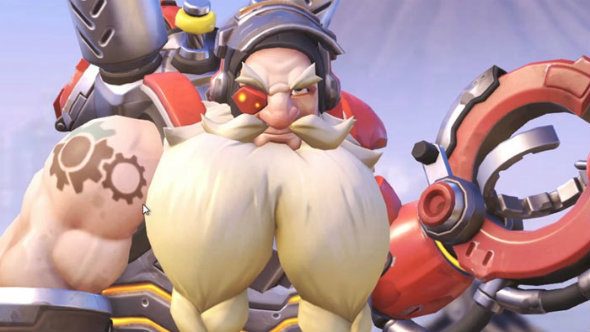 Did you know Overwatch’s Torbjorn is listening to Survivor by Destiny’s Child through his headphones? Well, did you realise that the world of Blizzard’s shooter is populated with flying cars – propped up by the solid light tech Symmetra uses – but two of the cars in the world randomly have wheels? They’ll be patched out at some point.

Check out our upcoming PC games list so you’re always a step ahead.

Overwatch game director Jeff Kaplan and principle game designer Geoff Goodman have just hosted a video to answer questions about the game, revealing some juicy trivia in the process.

In the video, embedded above, the pair talk quite extensively about hero creation. At one point, Mercy’s damage beam buffed attacks by 50%, but this was kinda ridiculous, so they took it down to 30%. Then the game released, time went by, and they tried putting it up to 50% again, only to realise it was still terrible.

One of the main regrets of Goodman, though, is giving Genji a double jump. While it makes him feel great to play, it also makes him a nightmare to balance. In fact, he was such a nightmare that he ended up taking a year and a half to create, as they kept putting him on hold.

Creating a new hero is more art than science, they say. Genji could even perch at one point, dropping down and killing players from above. Bastion trialled ten ults. It’s quite normal for ideas to get thrown away or revisited though. Case in point: Goodman has around ten prototypes sat around that never took off.

There’s a bit at the end where they talk about Doomfist, but it’s mostly sarcasm and vague hints. That’s probably because Doomfist could be coming in the next patch.