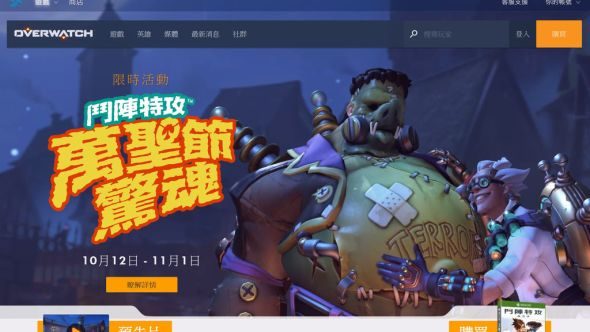 Update October 11, 2016: Not everything can go without a hitch and today’s Halloween Terror Overwatch event has proven the rule by introducing, and then breaking, its own leaderboards.

Have a look at the second episode of Overwatch This, with similar speculation in this direction.

The update, which went live at 9am PST, has since broken the leaderboards it added to the game for Top 500 players as well as the best scores in the Halloween brawl mode, Junkenstein’s Revenge.

Due to a bug, we've temporarily disabled Leaderboards on PC, PS4, and XB1. No ETA for a fix, but we'll provide an update once it's resolved!

Additionally, several players are reporting that certain character abilities are triggering without input, most notably Ana’s Biotic Grenade. In the playthrough PCGamesN tried of the Brawl just after launch, we found Ana lobbing her grenade at least once unprovoked, though if you watch the gameplay you’ll probably just think it’s us being bad…

Update October 11, 2016 19:00 BST: The Halloween Terror Overwatch event is live right now and all 12 hero skins have been revealed, as well as theBrawl details for Junkenstein’s Revenge.

The Brawl sees four human players – one each of Ana, Hanzo, McCree or Soldier: 76 – face off against Zombie Robots, AKA Zomnics, who are attempting to destroy the castle doors of spooky Eichenwalde. The Zomnics are occasionally supported by Dr. Junkenstein and his allies, Roadhog, Mercy and Reaper.

You can also now see all 12 Halloween Horror hero skins in their spooky glory as well. Sadly that means half the cast don’t get a costume, including McCree bizarrely considering he’s dressed as Van Hellsing in the Halloween comic. See them all below. 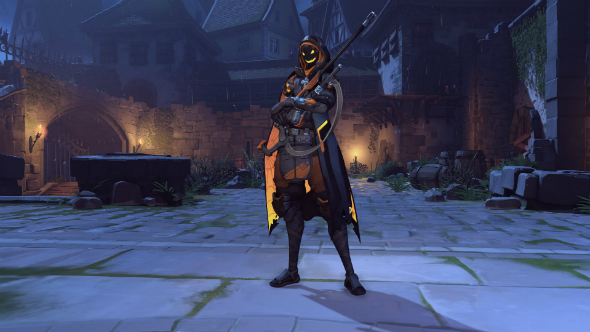 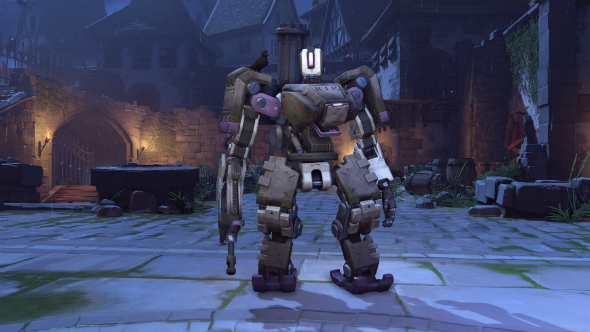 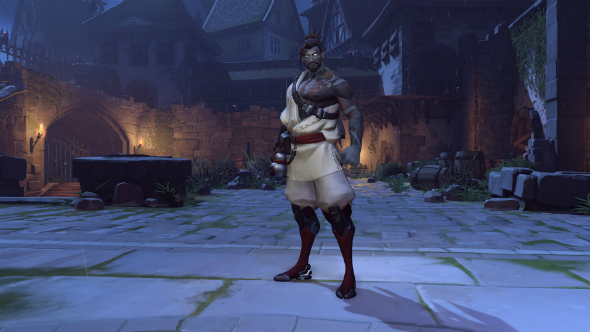 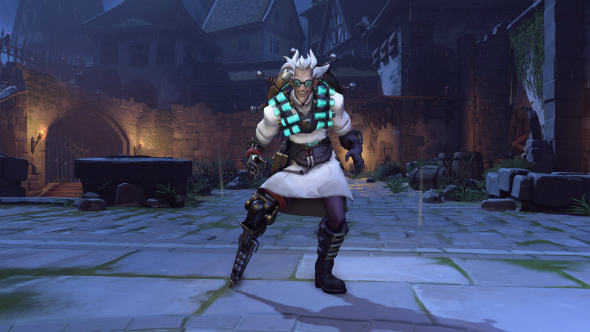 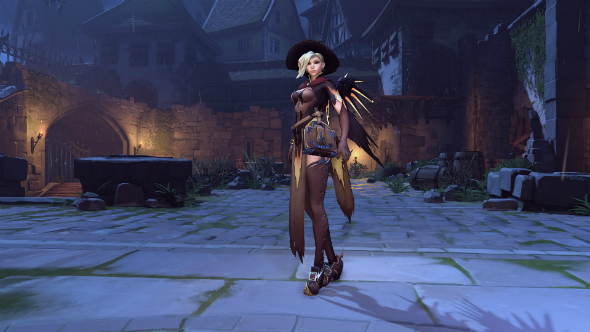 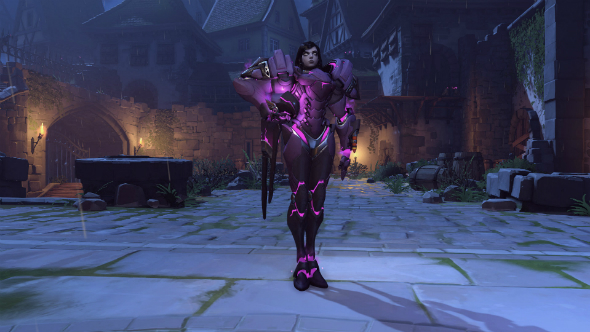 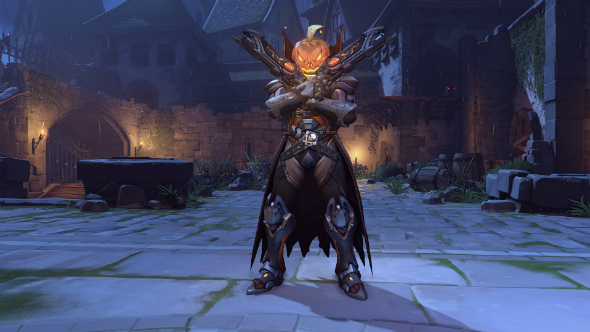 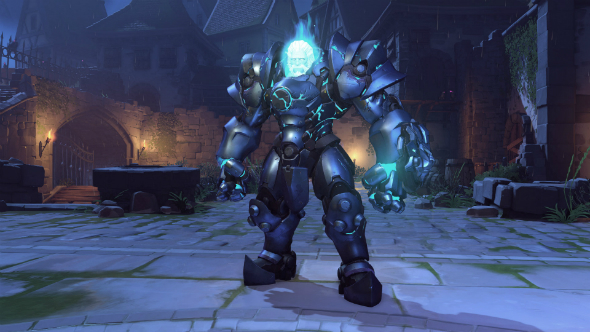 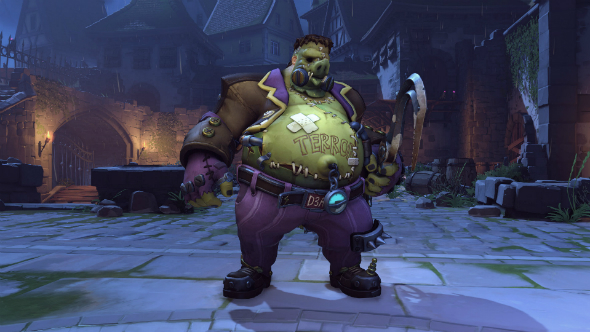 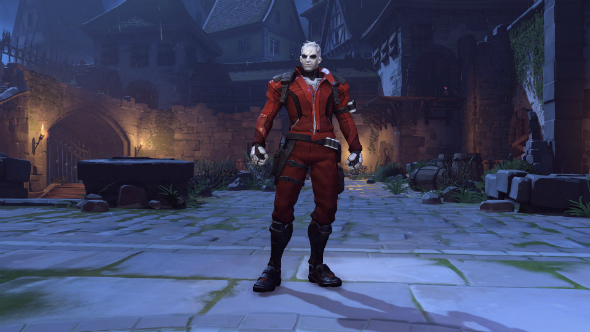 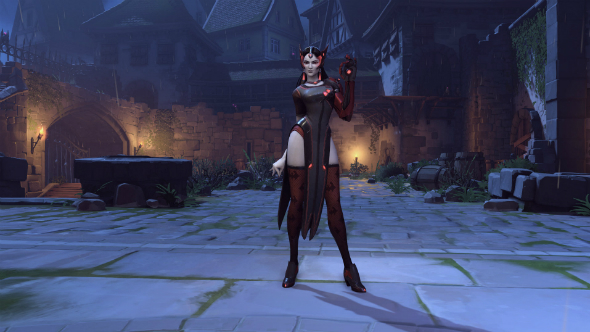 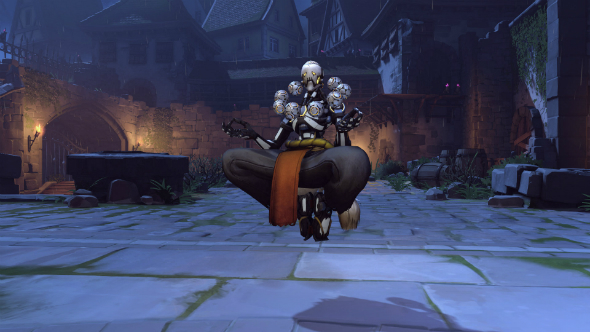 And here’s what the Brawl, Junkenstein’s Revenge, looks like in practice:

Update October 11, 2016:A further pair of leaks has revealed the date and release time for Overwatch’s halloween update to come online, as well as a glimpse at one of the skins.

Bless the internet café in all its forms. Korean PC bangs have received instruction as to when to expect the next Overwatch patch and how large it will be. At 3am KST, about 10 hours from this post, 1.74 gigabytes of new data will be added to Overwatch. This is consistent with the size of previous cosmetic-focused patches. At the same time, the Taiwanese Battle.net site accidentally set new header images live with dates for the event.

First up, here’s the full text of the instructions given to Korean PC bangs, as translated by Reddit:

Here’s a full list of Overwatch halloween patch release times around the globe:

The ‘Halloween Horror’ name and Roadhog pig-monster skin were also reconfirmed, along with an end date of November 1, in a leak on Battle.net. 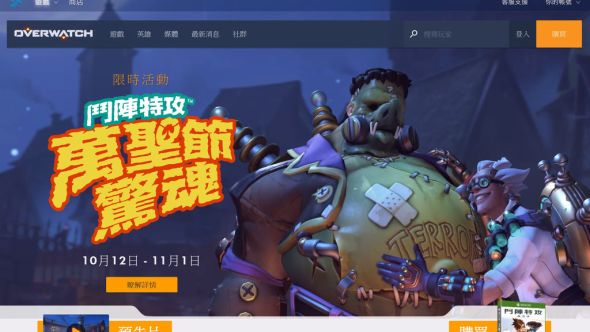 This was also translated by Reddit with the title Halloween Horror, and the end date can be clearly seen at the bottom. This gives three weeks of spooky goodness and loot boxes for players to take part in. As Eurogamer reports, Sony also had a leak of their own on the Playstation blog detailing the Halloween loot box packs that would be available. They list these as coming out on October 12 as that’s when the Playstation store updates – it’s still very likely they’re hitting today on PC.

The only thing that remains to be seen is whether the system for getting items has changed or Blizzard have stuck with the system that proved so unpopular last time. Look out for full videos of everything new from us over on YouTube as soon as possible.

Update October 8, 2016:Further leaks including thefront page of an upcoming comicfor release next week seem to confirm things are about to get spooky in Overwatch for Halloween.

After a listing for Halloween loot boxes appeared on the Xbox store yesterday, more hints at what cosmetics and skins will be available in the crates have arrived with news of a new comic.

The comic, leaked through digital distributor Comixology’s subscription alert system, is called Junkenstein and features a mad scientist Junkrat, Headless Horseman Reaper and Mercy as a pagan scholar-janitor, or possibly a witch.

Junkenstein will be released on October 12, so expect next week to be full of spooky surprises when you log into Overwatch.

Original story: A poster on Reddit managed to find the above image while browsing the Xbox store, and quickly grabbed a photograph. While the blurry nature and lack of confirmation from other sources suggest it could be a fake, the timing of it is consistent with what happened regarding Summer Loot Boxes, as is the description. It reveals some interesting things about Overwatch’s next special event.

Most notably, an end date. Buried at the bottom of the listing it says that “Halloween loot boxes are available to purchase or earn in-game until 11/1/16 at 4pm pt.” according to a second post by photographer ChronosHero on Reddit. Given the last event of this type, the Summer Loot Boxes, ran for three weeks, that would put a launch date at the start of next week – likely Tuesday, along with the patch that is currently on the PTR.

As for how the event will go, we’ve got some idea of that as well, though the community is hoping everything won’t be the same as last time. The description of the boxes and duplicate result is similar:

“Trick out your collection by picking up Halloween loot boxes, available for a limited time. Every loot box contains up to four cosmetic items, including at least one halloween skin, highlight intro, emote, victory pose, player icon, voice line or credits that you can use to unlock other items. More than 100 halloween items are waiting to be unwrapped!

“If your Halloween loot box contain an item that is already in your collection, you will instead receive coins.”

The key difference here, as pointed out by one Reddit user, is the use of “coins” in the final sentence over “credits.” The hope is that this means the much-requested feature of event-specific currencies have been added for this go round, removing the issue of making desired skins extremely difficult or expensive to get. We did the maths on Overwatch loot boxes last time and it wasn’t pretty.

Keen-eyed viewers will also notice the purple candy in the background has a copy of Sombra’s logo on it. Whether that means the mysterious lady herself will be launching without any time on the PTR or is just another case of Blizzard getting a final troll in before her reveal at BlizzCon or later this month remains to be seen. On top of the above, expect a new special brawl and probably some other surprises.

Once the event is live – it’s possible this could happen tonight, though unlikely – we’ll bring you a rundown of all the new cosmetics on our YouTube channel, along with anything else of note. In the mean time, here’s us speculating about Halloween skins just yesterday: