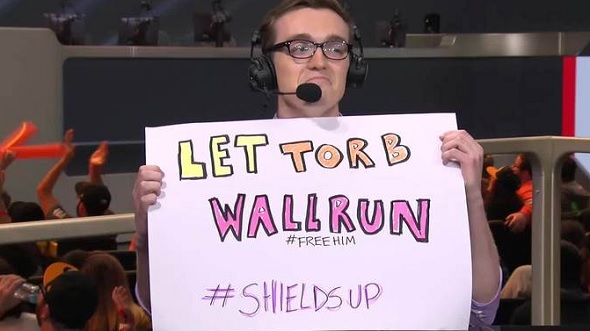 For better or worse, the Overwatch fandom has felt integral to the game since it arrived in May 2016. According to Fandometrics, Overwatch attracted nearly 150 million engagements on Tumblr throughout 2017, making it not only the most popular videogame on the site, but also more popular than every TV show and film by a wide margin. That sure is a lot of fan art.

Blizzard have always been keen to interact with the fandom, too. The developers have embraced ‘gremlin D.Va’ – a meme-ified version of D.Va that embodies all negative gamer stereotypes, including chugging down litres of Mountain Dew and bags of Doritos – by immortalising it as an in-game emote. Jeff Kaplan, the director of Overwatch, has even revealed what his favourite fan-made ‘ships’ are.

Get to know one of the Overwatch League’s stars “scary” journey to the top.

Now, with the Overwatch League well into its second season, and viewership numbers looking steady, fans are finding new ways to get attention. Those who watch the matches live from inside the stadium make and brandish their own hand-made signs.

That may not sound particularly impressive. But the unrelenting creativity and humour of the Overwatch fandom shines through during each broadcast, scribbled across pieces of card in permanent marker and felt pen. What started as a fun way for fans to show appreciation for the League’s teams has slowly turned into elaborate ploys for attention, with Blizzard more than happy to meet fan demand, no matter how ludicrous.

It all started with Torbjorn. Following a recurring joke across the Blizzard forums demanding the pint-sized engineer be able to wall-run, the quip soon reached the stands of the Overwatch League stadium, with one fan demanding Blizzard ‘free him’ by gifting him the gravity-defying ability. Blizzard obliged, and we were graced with the following horrifying possibility:

This may seem innocent enough at first, but imagine if Blizzard were to implement such a thing, even for a day? Imagine turret after turret being perched in spots usually reserved for snipers. Imagine hearing ‘Molten core!’ and knowing you are about to suffer a lava-fuelled death from above. I shudder at the thought.

Never a fandom to be outdone, Overwatch fans upped the ante, and their demands along with it. At one point, they turned caster Chris Puckett into the angel herself, Mercy, complete with her iconic wings and halo. Fellow casters Brennon Hook and Alberto Rengifo looked on in delight, cementing the crowd culture as an integral part of the casting experience for the Overwatch League, it being one of the predominant reasons why the game is so enjoyable to watch.

Since the birth of wallrunning Torbjorn, we have seen plenty more entertaining fan signs pop up in the audience, from my personal favourite of a fan declaring to teams to ‘play Symmetra you cowards’, to various giant Jeff Kaplan heads that seem to float about innocuously, as well as demands to ‘let Roadhog fly’ (yes), and ‘let Bastion wall-ride’ (please god no).

Most recently, Blizzard once again answered fan demands by creating what can only be described as a monstrosity:

The video lends credence to the adage ‘just because we can, doesn’t mean we should’. The image of Zenyatta’s squatting, writhing limbs will never leave my soul. I fear Blizzard may have given fans a power they are not yet ready to handle. What madness will they unleash upon the world next?

The enthusiasm and engagement shown by fans, and the responses from Blizzard, have become more essential as a sideline entertainment to the Overwatch League due to some of the unsavoury behaviour from pro players recently. Not only does it offer a salve in the form of amusement, it is a channel through which Blizzard help detoxify the atmosphere of both the League and the game itself. May it continue for much longer.

What would you write on a sign for Blizzard to see? Which Overwatch character is deserving of a new ability? Tell us in the comments below.