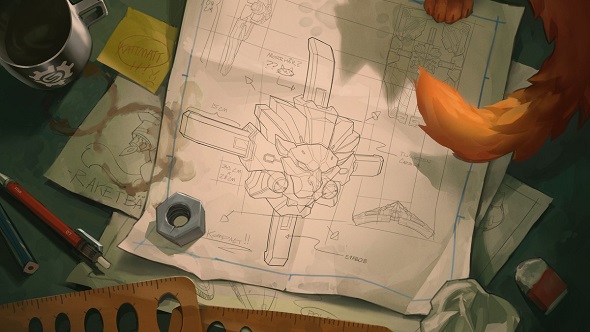 Update, February 27: Another tease has been posted, but this time, it’s not entirely a Brigitte hint. No, my friends, this time: it’s hinting at Jetpack Cat.

You might remember Jetpack Cat as being one of the concepts early on in Overwatch’s development. It’s somewhat of a meme nowadays, but, uh, it might no longer be one, because the latest teaser for the next Overwatch hero has a clear drawing of a cat in a jetpack.

Here’s what we know about who could be Overwatch’s next hero.

It could be a way to poke fun at the community, but, really, that’s totally Jetpack Cat under the coffee mug stain. Right there. Jetpack. Cat.

We should also point out what looks to be a shield, not in the Reinhardt or Orisa sense, but in a more traditional tall personal bit of defence sense. In the top right you can see a full image, which looks to be like a tall shield for once hero to use. Perhaps Brigitte will come with her own shield?

Last night, Overwatch Twitter accounts around the world posted a design of a hammer-like weapon with Swedish notes, hinting at the game’s next hero – all but one, that is. The Japanese account instead posted a filename and a date.

The tweet was swiftly deleted and replaced with a Japanese version of the rest of the world’s tease, but as Blizzard and everyone surely understands by now, nothing done on the Internet can be undone.Here’s a screengrab of the deleted tweet and the associated Reddit thread,courtesy of fogmoon.

The tweet says ‘Brigitte Tease #3’, and counting the Operation White Dome report, last night’s blueprint would indeed be the third hint of the next hero. While we all understood that’s what these last few teasers were (see below), seeing them named as such in an official-seeming hype programme suggests that Brigitte is now pretty much a lock. All that’s left is the official reveal.

Update, February 26:Another teaser has been posted for Overwatch’s next hero, and it definitely looks like Torbjörn’s daughter is joining the heroes of Overwatch!

The latest teaser is just a picture of a plan for a hammer, Slaga, and apparently this is version 3.0. There’s nothing too great that points directly at Brigitte, except for a small pad in the bottom right of the image.

“I'll knock some sense into you!” pic.twitter.com/Fc7zP2NOfJ

Why do we think it’s Brigitte? The pad in the bottom right is a list of materials in Swedish – Torbjörn and his daughter are Swedish.

The plot thickens every day – hopefully, a full hero reveal is coming soon!

Update, February 26:Torbjörn’s daughter could be Overwatch’s next hero.

Earlier this week, the Overwatch Twitter channel tweeted a declassified report that detailed the aftermath of operation White Dome, a strike against “a remaining pocket of omnic resistance” in Turkey. The operation should have been a routine Overwatch mission but the team was ambushed by omnics, resulting in Reinhardt saving a severely injured Torbjörn.

An update to the story has now been released, showing a letter Torbjörn wrote to his wife during his recovering, and teasing his daughter may be the next Overwatch hero.

The letter explains that Torbjörn’s arm was amputated due to the severity of his injuries, but that he was determined to create a prosthesis to replace it. Clearly, it worked, as the Torbjörn we know today has a prosthetic arm. However, last year’s Uprising event allowed us to get a glimpse of the younger, two-armed Swede with the Ironclad skin.

The letter goes on to talk about another character we’ve met but, at this point, isn’t born yet – Torbjörn’s daughter, Brigitte Lindholm. 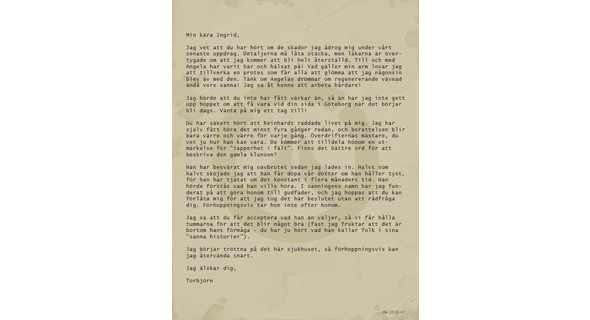 I know that by now you have gotten news of my injuries in our latest mission. While the descriptions may sound terrible, the doctors are quite sure I’ll make a full recovery. Even Angela came to visit me! On the matter of my arm, I promise to make it my first priority to construct a suitable prosthesis that will make everyone forget that it was ever gone. If only Angela’s dreams of tissue regeneration were a reality! I told her she should be working harder!

They tell me that you have not yet gone into labour, so I am holding out hope that I will be able to be by your side back home in Gothenburg when the time comes. Just wait a little longer for me!

You may have heard that Reinhardt is responsible for saving my life. I’ve heard the story at least four different times myself already, each time more unbelievable than the last. Exaggerations, as you know how he can be. All the same, they’ve decided to award him a commendation for “conspicuous bravery.” Could two words better describe the big oaf?

He has been bothering me insufferably at my bedside. Half in jest, I suggested that if it would shut him up, I would allow him to name our daughter, as he has been badgering me about it these past months. He, of course, took me at my word. Truth be told, I had been considering making him her godfather, and I hope you’ll forgive me for making this decision without your consultation. We can only hope she doesn’t take after him too much.

I told him that you would have to agree to any name he chose, so let’s hope it’s a good one (though I fear that may be beyond his abilities, given some of the ridiculous names he gives the characters in his “true stories”). I’m getting sick of this hospital, so I am hoping to return soon.

Torbjörn explains to his wife that, in return for saving his life, he told Reinhardt he could name their expected daughter and suggests making him the child’s godfather. We know this daughter would grow up to be Brigitte Lindholm, who we met in the cinematic Honour and Glory, a metalsmith and mechanic who is essentially Reinhardt’s right-hand woman. If Reinhardt is her godfather, it would explain why the pair are so close.

This letter teases that perhaps Brigitte is the next Overwatch hero, after all there was a huge fan outcry to add her to the game after her cameo in Honour and Glory. If she is the upcoming hero, it could be she’s a tank like Reinhardt rather than defence ike her father, as Torbjörn explicitly says he hopes she doesn’t take too much after Reinhardt.

This wouldn’t be the first addition of family to the roster, we already have Pharah and her mother Ana, as well as brothers Genji and Hanzo.

Original story, February 23: Overwatch’s next hero, event, and map could be set in Turkey.

Last night, the Overwatch Twitter channel tweeted an “after-action report” of an old Overwatch operation. We reckon it teases a new hero, a new map, and, the game’s next lore event, which is due some time in April.

The declassified operation is called White Dome, and the report says it was a strike against “a remaining pocket of omnic resistance” in Turkey. This likely means White Dome took place during Overwatch’s heyday in the omnic wars, much like last year’s Uprising event.

The Uprising event starred four heroes, and the White Dome report mentions four Overwatch agents: Ana, Reinhardt, Torbjorn, and “private first class Emre Sarioglu.” That last name is obviously not a current hero, and is probably a local: ‘Sarioglu’ is a Turkish name.

Perhaps Emre will be introduced alongside a new lore event based on Operation White Dome? When we spoke with Overwatch director Jeff Kaplan in December, he said building on Uprising was a “challenge, because that was a very specific lore event. I think we have some interesting plans to evolve what we’ve done in Uprising, but I’m gonna leave that a bit of a surprise for now.”

Blizzard have to give Overwatch fans another chance to grab the Uprising skins, and reissuing them alongside some new ones from another lore event at the same time would make a lot of sense. If we’re going to re-enact Operation White Dome, that means we also need a new map, since there isn’t a Turkey-based map in the game right now. And incidentally, note that name: White Dome. Perhaps the Turkish map will feature the Hagia Sophia, and thus be set in Istanbul?