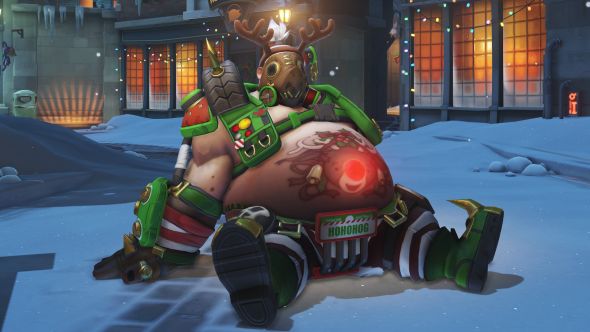 Another build is coming soon to the Overwatch PTR, which will further tweak Roadhog’s hook (are we hook 2.1 now?) to address player concerns that escaping it has become too easy. The new build will also bring another (minor) buff to Sombra and a further (minor) nerf to Ana.

Overwatch made our list of the best shooters on PC. See which company it shares.

After a nerf in the last patch to hit the public test realm (PTR), many players who tested Roadhog’s new hook felt Blizzard had gone too far. Line of sight checks to the target throughout the hook’s duration now mean targets that have been hit can ‘break’ the hook by walking past the nearest obstacle, no matter how minor.

So earlier this morning, principal designer Geoff Goodman took to the Overwatch forums to announce a new build is coming to the PTR with the following changes:

Besides the adjustments to Roadhog’s hook, this build brings another buff to Sombra’s hacking and another nerf to Ana’s healing grenade. Sombra can now hack faster, and will have her hack ability ready more often, making her much more useful when it comes to shutting down enemies.

The overall healing of Ana’s grenade was nerfed by 50% in the last PTR. A second tweak so soon suggests Blizzard are taking Ana’s integral role in the current ‘tank meta’ seriously, but it seems those users on the forums calling for a more drastic rework are set to be disappointed. Commenting on such a thread, game director Jeff Kaplan says:

“We’re really happy with Ana’s design. We think she plays well and has a good set of abilities. We will vigilantly watch her in terms of balance, but she is not a hero that is in need of a rework from our perspective.”

Incidentally, if you’d like to test these changes, you can access the PTR (public test realm) by selecting ‘PTR: Overwatch’ from the Region/Account box on the Overwatch tab of the Battle.net launcher (you’ll need to install it).

However, it seems some players are struggling to access the test realm. On the forums, user GeneralSith reports getting an “unexpected server error occurred” message whenever he tries to log in. Responding, Blizzard software engineer Bill Warnecke says:

“The error stems from a data migration problem when copying data from the live database to the PTR database… Hopefully for the 1.8 PTR, we’ll have an updated process for transferring accounts which will not only allow us to keep accounts closer in sync (updated near the start of each ptr) but also reduce or eliminate the data migration problems that cause this login error.”