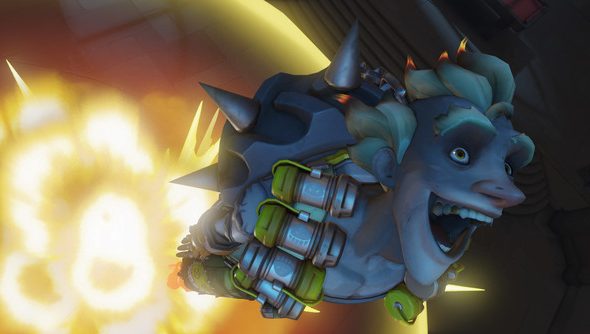 Overwatch, much like the international paramilitary organisation with which it shares a name, has already changed the world. No matter where you look, from Twitter feed to Twitch stream or YouTube video to You… something else entirely, the game is everywhere. While we’ll likely never know exactly how many players are taking each other on, it’s very clearly a success. The question, then, isn’t whether it’s good – it is – but whether it’s worth the hype.

Speaking of hype, have you seen our collection of the best Overwatch plays of the game?

In case you’ve managed to dodge the basics, it starts simple: 21 characters, 12 maps, 4 modes. You push carts, capture points, defend chokes and eliminate enemies. Grabbing kills isn’t important, to the point where Overwatch’s UI makes it exceptionally difficult to tell which player dealt the final blow, it’s all about objectives. Disrupt the enemy team, take their stuff, get that W and on to the next map.

How you do that is where the magic lies. Four broad groups divide the roster into Offense, Defense, Tank and Support characters. Generally this means flankers, immobile damage dealers, front-liners and healers, but the variation within a category can be extreme. Standard sprinting COD-man Soldier: 76 with his mid-range machine gun and underslung grenade launcher sits alongside the wall-climbing, ninja-star throwing, slash-dashing Genji in offense. Both play very differently, have strengths and weaknesses at different ranges based on their specific abilities, with plenty of opportunity for skill to overcome disadvantageous situations and capitalise on better ones. 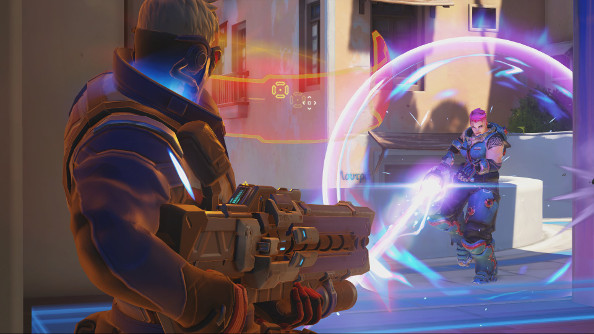 The only single running theme between every hero is access to some basic abilities and an ultimate. It’s where the game crosses over from the obvious TF2 comparisons to the far more applicable MOBA ones. While matches are faster, rarely lasting over 10 minutes, a similar level of character knowledge, cooldown management, positioning, team-coordination and capacity to do exactly the right thing at exactly the right time is required. Small engagements do not win games, but large battles do. Your personal star play to kill off the opposing Mercy, a flying, heal-beam spewing, mass-resurrecting support character, is only great if your team follows it up, otherwise she – and probably you – died for nothing.

While Team Fortress 2 operated at peak fun in up-to-12v12 games with players split across nine archetypes, Overwatch dropping to six-a-side means, much like in Dota or League of Legends, what you’re doing actually matters that much more. This even applies to who you’re playing, and with the mix of any-time hero switching and multiples of the same character allowed per side (plus that fuller complement to pick from) the combinations and choices are endless. 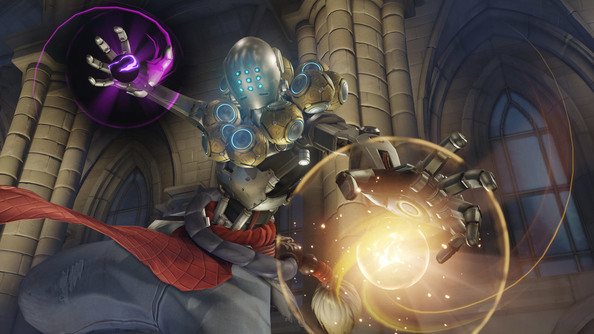 There are compositions that simply don’t work, and those that are elite. What passes for Overwatch pro teams – currently six-person squads that scrim and don’t play for a whole lot of money – often run with two McCrees, finding their deadly stun into multishot combo to be too good to play without, but you won’t see it that often in your public games. While UI elements help to push towards Blizzard’s intended meta of a support, a tank and four assorted others depending on map and mode, the chaos of uncoordinated public servers means basically anything is viable if you’re adept.

That’s the key – every single one of the cast has advanced strategies at their disposal, you just need to know what they are and when they’re applicable. Take the aforementioned Soldier: 76, easily one of the game’s simpler characters on the surface. Beyond the obvious complexities of aiming, shooting, picking targets and burst-firing to maintain accuracy, he has access to a rocket-jump using his alternate fire that can carry him to some very specific shortcuts. Just mastering how to do it will take you a few tries, nevermind where and when it’s applicable per map.

You’ll spend eight hours just getting familiar with everyone, then far longer on each you wish to master. Overwatch will take as much of your time as you’ll throw at it, devouring weekends if you wish to play with the elite or the odd hour for a quick blast on your favourite character between dinner and bed. You are far more likely to become bored with its smaller number of maps and similar modes or frustrated by poor team-mates before you run out of new things to actually do. 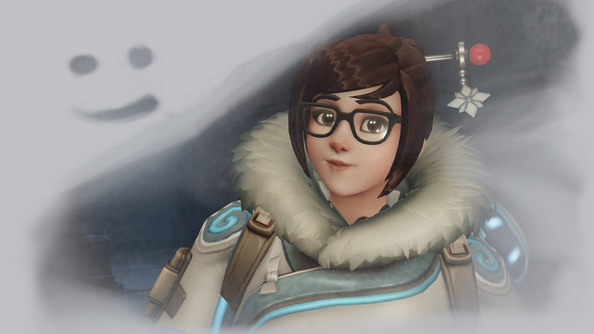 You’ll jump into your first match and pick the character you think looks cool and you will have fun. Then, dozens of hours later, you’ll try a hero you bounced off or passed over, and you will have fun again. You’ll realise you can play Widowmaker on attack, counter-sniping opposing long-range shooters and picking off healers or retreating flankers. You’ll consider a more aggressive Reinhardt, diving into scrums of enemy players and swinging his rocket hammer (rocket hammer) wildly before retreating, healer at your back and massive shield in front. Every shot, every swing, every charge will feel great, UI popping off with information, flashing up kill notifications and telling you you’re on fire – meaningless mechanically, but an incredible feeling – when you do well.

The whole time there will be auto-generated team chatter between the characters who, while less developed than their far older counterparts in other games, pack personality into every word. They’ll chat to each other about whatever map they’re on, call out enemy positions, significant happenings – each character has a unique way of saying “the opposing Mercy just resurrected the entire enemy team and now we’re all doomed” for example – or tell everyone to get hyped when they’re on a streak. It makes the world seem alive, the battles important, rather than six humans sweatily gripping their mouse and keyboards, facing off against a slightly different six.

It also encourages teamplay, which is what Overwatch relies on above all else. Ultimate abilities can swing games, but usually have simple counters. Russian body-builder tank Zarya might be able to suck a whole team into one area with her black hole cannon, but an enemy Winston dropping his bubble shield or Lúcio keeping them healthy with an AoE healing song will stop it being more than an inconvenience. But if you add a Zarya-allied Pharah’s stream of missiles (and justice) from above or Roadhog pummeling them with shrapnel, it’s a team wipe. Equally, you going in solo as Reaper is all well and good for trading your life for one of theirs, but if your team is making a big noise on the front-line while you’re doing that, you’re going to pick people off more easily. 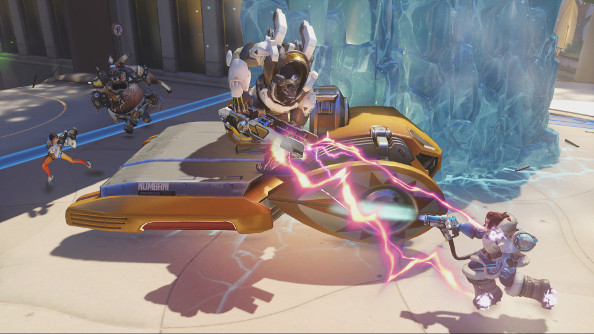 All of that means that Overwatch is a game destined to be played in groups at its most fun. How this will shake out in the competitive mode remains to be seen, but for now I’d absolutely recommend finding some chums with similar goals to you – whether that means playing just for fun of an odd evening or going all in on winning every game – and partying up whenever you can. Blizzard clearly realise that the game gets infinitely more enjoyable this way, as with anything multiplayer. There’s a hefty 20% experience bonus for the exclusively cosmetic levelling system when you play as a group, but even beyond that the match-making tries to keep teams together as long as possible when transitioning between games, wanting them to get into rhythms of play and learning each other’s strategies.

Add people you enjoy playing with to your friends list. Use the avoid/prefer system to get auto-matched with players you like and get away from the fools who pick that third Hanzo on offense. It’s not so much about communication, though the high-quality in-game VOIP certainly helps with that, but the knowledge that at least one or two of the other people on your team will make sensible hero picks, play support if they need to, and can actually shoot.

So yes, it’s fantastic. Getting into the flow with a character once you know their cooldowns, their individual match-ups, when to attack and retreat will make you feel godly. Those games without deaths where you’re constantly killing enemy players, defending objectives and moving forward are some of the best I’ve ever had online. The middle tier of hard-fought victories or close defeats are great too, and always feel like your actions, despite being part of a team, were significant – it was your hero switch at the last moment that saved the day, or your ult that kept the other team back, or a poor decision from you that meant nobody was there to push the payload that final inch.

But the hype? The fan art and montages and Twitch streams and 330,000 strong Reddit community? Deserving that, and maintaining it, is Blizzard’s job for the foreseeable future. 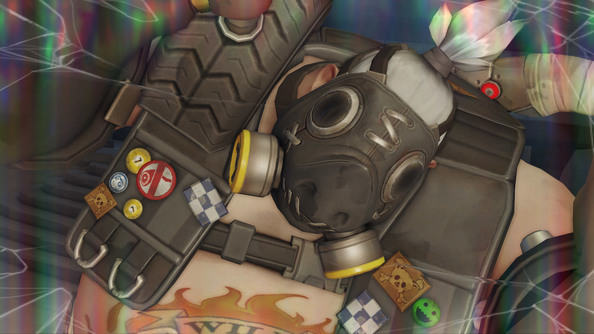 Don’t get me wrong, there is a problem here, though a fixable one. While on PC we have the option of a cheaper, no-frills edition, it’s still selling for the cost of a full-price game. If you find the intricacies of constantly shifting multiplayer don’t fill your mind, there is no campaign mode to make it feel like value, no hope of grabbing it in a Steam sale and, as yet, not even a competitive ladder to invest yourself in. While that last is due to be implemented soon, a quick tutorial and weekly rotating wacky format on top of the default play mode really is all that’s there for now. You can’t even select which modes you’d prefer to play, likely a decision by Blizzard to prevent a community split between them.

In this honeymoon period with millions of people learning the game and playing with their friends, it will be enough for the majority, but it’s lacking compared to its competitors. TF2 has more maps and modes, CS:GO has a massively developed pro scene, Dota 2 has custom maps plus a far larger pool of heroes, and League of Legends – well, League is League, but it also gets fortnightly balance tweaks, feature updates and skin additions.

Those are the biggest games in the world, the success stories of success stories that built genres, massive communities and entire payment models, but it’s also the tier that Overwatch is playing in. The actual moment to moment play of shooting and using abilities is polished beyond the wildest dreams of the biggest triple-A studios. Those eight months of beta paid off. Those years of dodgy WoW and Diablo launches from Blizzard culminated in a 15 minute delay on Overwatch release night and then not a single hiccup, barely a complaint of laggy servers. 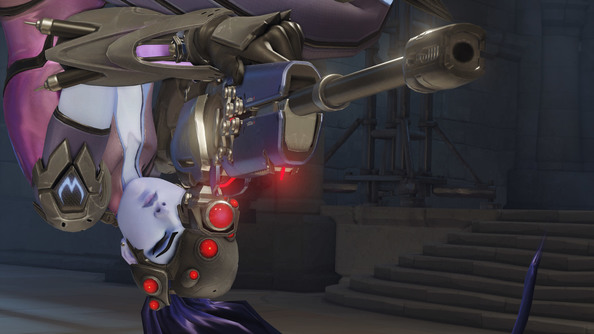 Blizzard treat all their games as services, but Overwatch needs to be the best they’ve ever provided. Regular, predictable updates that bring balanced, well thought-out changes and additions. Competitive mode needs to be spot on and fuel an eSport to rival the biggest. New heroes need to be brought in with care and support and be just as polished, both in play and style, as the current stack.

And they can do it, too. All of this happened in beta, albeit with a far smaller weight on the development team’s shoulders. They clearly listened to feedback without ever letting it override their plans, made swift decisions on problem areas and constantly communicated in every way. The development team is made of some of the brightest minds the company has ever had, veterans of World of Warcraft, Diablo, StarCraft II, games that made mistakes they’ve now learned from.

Get it right and it could be the next, biggest thing. Get it wrong and what we have now is great, but it won’t last forever.