Story time with Overwatch has returned – and it’s a whole lot fancier than it used to be. With a fully-animated cinematic intro, bespoke character UI, and a whole new map, Retribution is a big step up from last year’s Uprising event.

Here’s all the info on Overwatch Retribution skins, map, and enemies.

For many, it’s not much more than a welcome break from relentless matches of quickplay – a cool thematic diversion, complete with a whole host of new skins. But for the most dedicated players, lore-based events such as Retribution and Uprising feel like a glimpse into an Overwatch that never was. Indeed, Overwatch was – rather infamously – born from the ashes of Blizzard’s long-rumoured Project Titan – so it’s not hard to imagine the game in a number of wildly different forms.

Through Retribution, at least, we’re given a glimpse of what Overwatch would look like if it were less inspired by Team Fortress 2 and, instead, took cues from Valve’s othermultiplayer shooter.

Games influenced by Left 4 Dead are having a resurgence right now: Vermintide 2 takes the four-against-horde framework further towards Destiny with boss fights and RPG progression; while games like Deep Rock Galactic mix up co-op shooting with mining and gathering resources. What Overwatch brings to the table is a cast of unique characters, each with individual strengths, weaknesses, and a number of unique synergies between them to exploit.

In Overwatch’s normal, competitive play modes, you are incentivised to pick the best team composition for the moment – to play to the meta, map, and the opposing team. But without that pressure, there’s room to try the more weird and wonderful team setups, those that would never fly in competitive Overwatch. Throw Brigitte and Symmetra in with Reinhardt and Roadhog for unkillable close-quarters carnage; bring Lucio alongside Tracer, Sombra, and Genji to run circles around Talon; or push through the Omnics as an offensive Bastion and Torbjorn.

It’s hard to argue for Blizzard to work on more co-op content from a practical angle. Overwatch is a competitive game at heart, and narrated missions are both harder to create than a control-point arena, and get dull faster. Retribution spent almost a year in development after all, which is a long time especially when you consider it takes about ten minutes for a competent team to run through it. Compare that to the PvP version of the map slated for release post-event, which will see many thousands of hours of playtime, and you can easily see the huge cost of PvE. 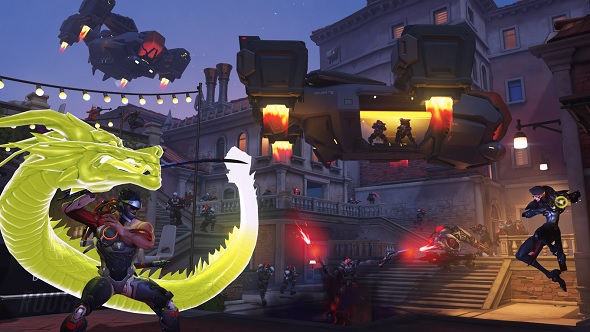 But when Blizzard talk about Overwatch, there’s an undeniable passion for the world, the characters, and the stories they’ve created. All this effort feels underused in a game that focuses on 12 heroes beating each other to a pulp over a payload. Retribution and Uprising finally make that world the star of the show but it deserves to be taken further. Imagine being able to fight one of the titanic robots from the Volskaya skybox, or play through the destruction of Eichenwald as it happens – the lore that is currently restrained to words, sometimes still images, actually brought to life.

Overwatch found overwhelming success as a competitive shooter but that is only part of the package. Fans have made it clear that they want more from the fantasy and the fiction. We get to see what it could be when four heroes come together in co-op setpieces worthy of a Saturday morning cartoon. It is probably too much to expect Blizzard to go all-in on a co-op campaign for Overwatch but they seem to be working up to that. That’s enough reason alone to get excited about what they might do with next year’s PvE event.