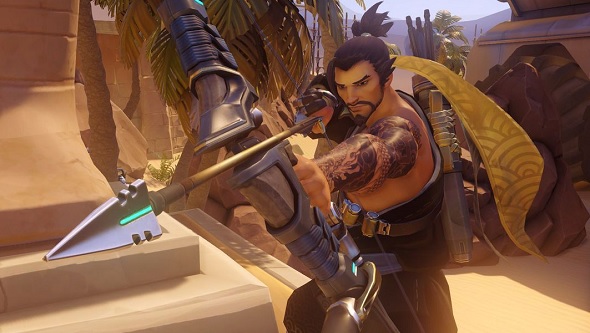 Update, April 19: The long-promised Hanzo rework is now available for testing on the Overwatch PTR.

Are you a Hanzo main? It’s okay. Your dark reputation up to this point is probably deserved, but don’t let that stop you from loving Overwatch’s dear, sweet arrow boy. Hanzo’s rework is now available on the PTR, letting you take the rebuilt offense hero for a spin.

Here’s why some Overwatch heroes still have a big identity problem.

Scatter Arrow is a thing of the past, replaced by the new Storm Arrows ability. This lets you rapidly fire up to six arrows, each launched at full power but with somewhat reduced damage. Hanzo also gets a Lunge ability, which lets you jump horizontally while in midair.

The rework also sees some slight alterations to Hanzo’s other abilities, as detailed below.

Our usual set of developer comments say that “the goal of these Hanzo changes is to allow him to have new options and maintain his high damage output, while removing the frustration of fighting against the old Scatter Arrow. Hanzo is now much more mobile with his new Lunge ability, and with the combination of the bow projectile speed increase and the new Storm Arrows ability he can now deal his high damage more consistently than ever before.”

Now we merely have to ask ourselves whether Hanzo can come back from the brink of memedom. Take him for a test drive to find out. There’s plenty more of note in the full patch notes, including Junkrat and Genji nerfs along with some significant improvements to Lucio’s wallride. Oh, and you can finally play on Rialto.

Update, April 11:Blizzard have given us an idea when to expect the Hanzo rework – and what’s taken so long.

Overwatch’s Hanzo has been in line for a rework for some time, and we’re creeping up on a proper release for the reborn archer. It obviously didn’t come alongside the Retribution event, but Blizzard’s Aaron Keller says we don’t have much longer to wait.

Keller tells us that even though Hanzo’s rework didn’t launch with the latest update, “it will be coming sometime shortly after that.”

Hanzo’s been a problem character for a long while – a meme in the Overwatch community- and Blizzard are certainly aware of the hero’s reputation. “It’s funny, I think that there’s always been a reaction against Hanzo – specifically the scatter arrow. It’s hard to really pinpoint what can put a hero over the edge. Some of it is how much time we’ve got and some of it is if the things we’ve been trying are working.

“Hanzo’s been a character who we’ve had our eye on for a long time and we’ve actually tried a lot of different things on him internally, but most of them haven’t worked out for the character.”

We have an idea of what Hanzo’s rework will look like thanks to a tease on the Blizzard forums (see below), including a new rapid shot ability. “Geoff Goodman really kind of nailed an experience that’s still true to the originally character and also feels very powerful but also feels very fair to fight against at the same time,” Keller says. “So that’s what happened, we just came up with something that we thought was great.”

Original story, April 3:Hanzo has always been the butt of Overwatch jokes, but a sneak preview of his upcoming rework suggests he’ll be the one to have the last laugh.

Jeff Kaplan shared some details about how Hanzo’s rework is progressing on the Overwatch forums, including an image of the concept art for Hanzo’s new rapid shot ability.

The rapid shot concept art shows Hanzo’s bow illuminated ghostly blue, this is purposely done so other players know when he is “in that mode.” However, we may not see this exact design hit live servers. 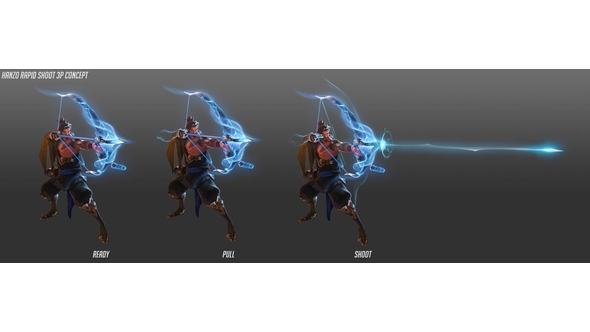 “We’ve done a lot of playtesting of his new rapid shot ability (that’s the working name),” Jeff Kaplan wrote. “We’re happy with that, the sonic arrow changes and the increase in speed of his arrows. It’s all feeling pretty good.”

“Sonic arrow cooldown is significantly fast,” Kaplan continued. “End result: you can move it around more.”

Though we don’t know exactly when the Hanzo rework will hit live servers, it shouldn’t be long before these changes hit the PTR.