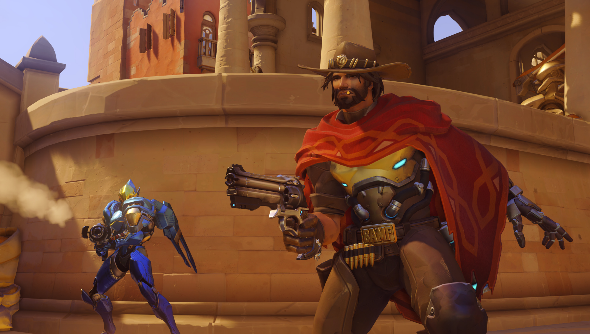 Blizzard are starting the hype train for Overwatch, their upcoming multiplayer shooter. They’ve already shown off their medic character and a support monk, but today it’s time for McCree to take centre stage. He’s a cowboy with a metal arm and a very fancy revolver called the Peacekeeper. Take a look at him in action in this video showing off a full match.

This Payload match of Overwatch takes place on the Watchpoint: Gibraltar map. During the game you can see McCree’s special abilities, such as rapidly cocking the Peacekeeper’s hammer for a much faster fire rate, some combat rolls, and a flashbang grenade.

McCree’s Ultimate Ability is Deadeye, which allows him to focus and then shoot every enemy in his line of sight. The weaker the target, the faster the focus charges. Pretty nifty.

Overwatch goes into beta this Autumn. Sign up for it here.