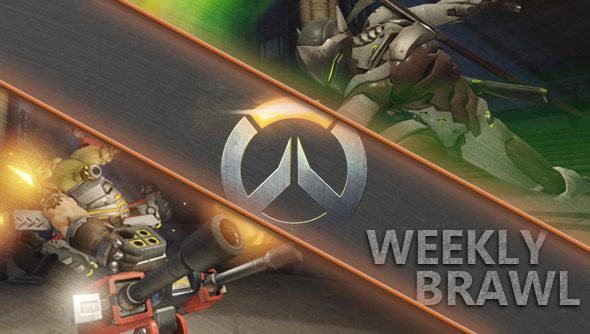 If you’re looking for Overwatch battles with a twist, you’ve come to the right place. Each week, we lay out the rules and restrictions of the latest Overwatch Weekly Brawl. It’s always best to go into a fight knowing what to expect.

For more competitive fun, check out our list of PC’s best multiplayer games.

Back when Weekly Brawls joined the beta, dataminers dug up some possible options, so check out that list for an idea of what’s coming. For now though, on to the present with this week’s Weekly Brawl:

This week’s special game mode is a bit different.

In celebration of the Olympics, Blizzard have just plonked a bunch ofLúcios in a Rocket League style arena.

You really can’t shake that Rocket League feeling in this one – the ball and the arena are almost identical. Saying that, if you’re going to take inspiration from a fun game about scoring goals, Rocket League is the one.

This week’s Weekly Brawl lets us test out McCree’s recent nerfagainst the hand cannons of Reaper and that probing Roadhog chain.

I don’t really fancy Reaper’s chances in this encounter much. He has to get right in to do big damage, and Roadhog is devastating at close range. Saying that, Reaper can just ghost off like a proper emo, slinking away into the shadows before running out and screaming “die, die, die”. Reminds me of my teenage years.

The latest Overwatch Weekly Brawl gives everyone a chance to get to grips with the new hero, Ana Amari.

Hopefully this Weekly Brawl – which lets people go mad with tanks or sit on a far away roof sniping, healing and damage dealing – will make vanilla Overwatch go back to normal a bit once everyone’s had a crack and got Ana out of their system.

If you are sick of seeing Ana already, you can always yank her off a building as Roadhog, too, so that’s nice.

This one isn’t for people with commitment issues.

Mobawatch asks you to choose a hero and stick to it. Not only that, but there’s only one of each hero allowed per team. It really makes you consider your choice before jumping in.

This Weekly Brawl is a perfect primer for Competitive Play Season Two, which will see teams only allowed one of each character, and presumably be unable to switch them up This Weekly Brawl is clearly a way to gauge reaction. I personally think it’s great.

This week’s Weekly Brawl, as you’ve probably gathered from the name, is focused on the Support role.

Choosing between Lucio, Mercy, Symmetra and Zenyatta, players must make up a team of healers and buffers, with only two of the same character per team.

Having just tried it out for the purpose of science, I can confirm it’s really hectic and rather fun. Suddenly, notoriously weak characters become an unstoppable force when there’s so much healing going on and the damage being done by your enemies is relative to your own output.

Justice Rains From Above

It’s time for the new Overwatch Weekly Brawl and this one is all about aerial superiority. This is one of those times when ‘verticality’ isn’t just a buzzword.

Choosing from either Mercy or Pharah, you’ll be taking flight, with the Pharah players dictating the movement of the healing Mercy players. Don’t forget to save each other from falling to your death with a bit of clever positioning.

This one seems pretty chaotic as is, but your abilities will also cooldown 75% quicker, giving you enough juice as Pharah for plenty of trick jumping and, of course, raining down some sweet justice, though ults won’t charge as fast as they normally do.

Expect to be blown around Hanamura, Temple of Anubis and Volskaya Industries quite a bit.

Let us know how you get on in the latest Weekly Brawl in the comments.