If you wanted to summon Pagan Online you’d have to draw a chalk circle on the ground and place parts of other RPGs inside it. Warframe’s swift mission run time, an inkling of Smite’s character design, and Diablo 2’s loot chasing would all have to be in there. But developer Mad Head Games is also bringing in its experience making hidden object adventures to weave a narrative inspired by Slavic myths throughout the game’s fantasy.

On top of that, World of Tanks studio Wargaming is acting as the medium of this seance, publishing Pagan Online as a games-as-a-service title. Such a broad and ambitious array of ingredients could summon a hideous poltergeist, but my first contact with Pagan Online’s early game has been closer to a pleasant whisper from a kindly Norse god. This action-RPG is on track to be a quirky experience that doesn’t lean too heavily on anything that’s come before it.

The pre-Christian realm of Pagan Online has plunged into turmoil since the gods vanished. It’s good thing that you’ve come along, then, weapon in hand and ready to help return the almighty to their respective seats of power. And if any rotten evil should reveal itself before you then damned be to it all.

The paganism influence will be immediately obvious to anyone in the know but others who would like to find out more about it are invited to indulge. Various gods and lands take their name and feel from Slavic mythology, but text prompts sprinkled throughout the world allow deeper exploration of the lore while offering respite from the challenging dungeon runs. The final version will make such idle wandering even better as it’ll have voice acting too. 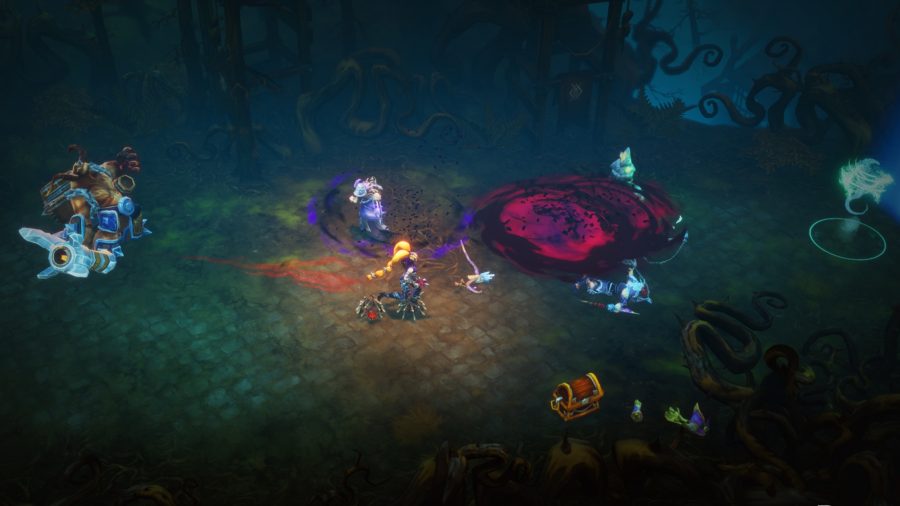 But it’s not old religions that seems to have guided most of Pagan Online’s design but the colourful chaos of MOBAs. Each hero pops, highlighted as they are with luminous glows of pink, green, and orange. It makes the game stand out when compared to the darker, moodier palettes of genre stablemates like Diablo and Path of Exile. It’s not just the visuals that make Pagan Online flashy, though – being more immediately accessible and faster at heart should mean it grabs the attention of easily distracted modern players.

This is realised through the straight-out-of-the-box heroes, each of which has a selection of abilities more or less set in stone from the start. You do get access to an upgrade tree that boosts their effectiveness, but nothing changes their dynamic in any significant way. In the late alpha build I have the option of playing a vampiric combo fighter called Anya who excels at range, a shield tank named Istok that can soak up damage and throw it back at enemies, and the melee-focused bruiser known as Kingewitch. The choice is meant to allow you to embody these characteristics more thoroughly, but a lack of flexible options may prove a tad too linear for Diablo and Path of Exile veterans.

The deviation from the ARPG formula is bold, but it does allow you to get to the punch swiftly, so you can start memorising the combo loops that’ll be hammered out on your keyboard for possibly hundreds of hours. That’s the main reason Mad Head’s streamlined character design works – it feeds into the pace of the game. Each act is a ten-minute sprint rather than a marathon, which is a noted influence from Warframe, and feeds into an overarching story. Each plot of land you journey to is densely populated with procedurally generated enemies and challenges: from hordes of enemies that appear in small and large numbers, to various timed challenges like a chest that contains plunder should you clear the mobs in enough time. At the end of each level you return to the game’s central social hub with a plethora of loot to sift through despite a relatively short time investment.

There is, however, only so much to glean from Pagan Online’s early game. Plenty of ARPGs like Diablo and Path of Exile earn their salt in the late game when character and gear customisation more earnestly take off, and everything comes full circle. Pagan Online boasts plenty of loot potential with a crafting system and streamlined quests that should make gathering materials and min-maxing builds simpler to do. But while grinding shouldn’t be too tedious due to the procedural generation, the linear character progression may prove a sticking point in the long run – endgame replayability may get lost due to the quick action.

I also cannot get a sense of what the multiplayer would feel like as it has been turned off for my play session. From what I can tell, each character fulfils a specific role – like Istok, the defensive tank. Team layouts and synergies should be worth factoring in if you play with friends, then. And, according to Mad Head, certain levels will require groups to replay with different heroes, too. Perhaps it’s there that the game’s longevity will be found. For now, let’s all join hands, close our eyes, and chant prayers so that the gods make Pagan Online the swanky Diablo alternative it’s promising to be.