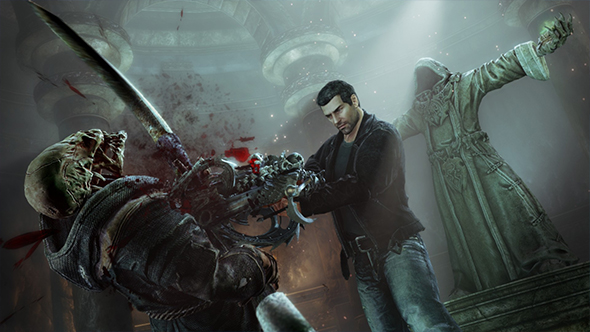 There’s not a lot that we can all agree on in the world of videogames, but there is at least one point where we’re all of the same accord: violent videogames are destroying the minds of youths around the world. Thankfully, we now have one less psychologically damaging title to worry about, because Painkiller is no longer considered “damaging to young people.”

For more entertainment to enjoy with your kids, check out the best FPS games on PC.

Painkiller – yes, the 2004 shooter that put People Can Fly on the map – used to be listed on Germany’s Federal Review Board for Media Harmful to Minors. Essentially, being on the list means that a game (or book, or film) can’t be sold or advertised in any place visible to minors, but Painkiller has been removed from that list thanks to the efforts of new license-holders THQ Nordic.

That means children no longer have to be protected from Daniel Garner’s violent quest to mow down the legions of hell in violent fashion and eviscerate the monsters that stand in his way. Yes, all that good, family-friendly entertainment is now cleared for enjoyment by all ages.

“We will of course still be nurturing our extensive games portfolio, and will do what it takes to ensure that gamers can play our games in the future,” say the folks at THQ Nordic. “We can still celebrate ‘small’ successes like this, even if more than a decade later!”