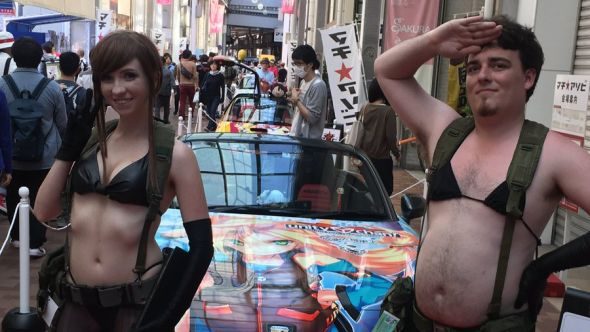 Palmer Luckey’s not had the best year. He doesn’t work at Facebook / Oculus any more. Nobody’s particularly happy about the things he was choosing to do with his money. However, life is about finding joy wherever you can and Luckey is doing so in Japan, dressed as MGSV’s Quiet. Honestly, he’s sort’ve killing it.

If he’s got you in the mood, here are the best sex games on PC.

Pictures are spreading around Twitter at a rate of knots as various folks that recognise the Time-feature tech-man post what they’ve found. Here’s the first set we saw:

"Hmm, I wonder what Palmer Luckey has been up to since… OH GOD" pic.twitter.com/eSbZh7O93P

And he’s more than happy to pose for photos:

More pictures of millionaires in bikinis as they break.