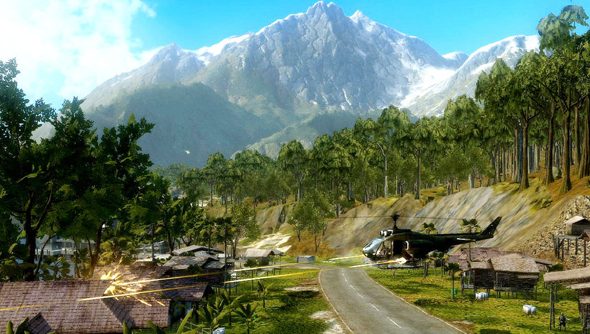 Why do we think Avalanche are building a sequel to their reliably ludicrous sandbox game? Just ‘cos. Har har har.

Not really – we’ve a few interconnected pieces of evidence that point towards a Just Cause 3. We’re a serious and well-respected news-gathering organisation, remember? Actually kinda hurt you believed that.

Internet-prowling private dick Superannuation has spotted that longtime Just Cause publishers Square Enix have registered a domain for the second sequel this week – and that’s just the latest in a series of promising signs.

Avalanche founder Christofer Sundberg’s private LinkedIn page includes a listing for an “unannounced sandbox action game”, say Eurogamer – one that’s been in development since August 2011, a year after Just Cause 2’s release.

“New installment in a very well-known game series,” reads the game’s description. “The game is being developed at Avalanche Studios New York studio and is scheduled for completion in June 2015 for next generation console platforms.”

Avalanche are also working on their very-much announced Mad Max game for Warner Bros, due out this year. But Just Cause is their first-born and most-loved.

“There is a very strong emotional attachment to the franchise as it was created by me and my design team here so we would obviously like to see a very bright future for Just Cause,” Sundberg told Eurogamer in April 2012.

“In this day and age when everyone is struggling to make money, my opinion is that the JC IP is perfect for everything that next-gen has to offer.”

Hmm! I imagine Just Cause 2 multiplayer will tide us over in the meantime. Or bowl us over, with a low-flying whirlybird.

What would you like to see in another Just Cause sequel? We’ll take plane grappling as the baseline.