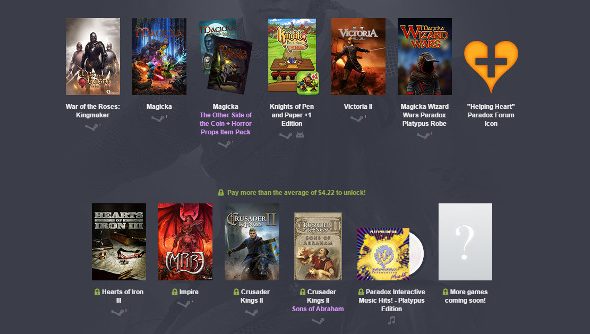 Not every Paradox game is a winner, of course. The charming but flawed Impire is one of the extras, as is the original Knights of Pen and Paper (which Fraser was lukewarm on though he is very high on the sequel).

Personally, I’m hoping War of the Vikings eventually joins the list of games, and perhaps EU: Rome. It’s probably too early to hope for Cities: Skylines, but perhaps the earlier Cities in Motion 2 wouldn’t be too much to ask for.

If you pay $15 or more, you also get EU IV and the Conquest of Paradise DLC, while #35 nets you a nifty T-shirt and some cool Magicka buttons.

Proceeds from this bundle go to AbleGamers and Extra Life.