The surprisingly-good Path of Exile will launch its newest expansion, The Awakening, on July 10th. And according to the latest info from Grinding Gear Games, there’s even more going on in The Awakening than we knew to expect.

The last time we checked in on Path of Exile, designer Chris Wilson had a lot to tell us about how The Awakening was going to really emphasize the game’s unique itemization and skill mechanics. Since Path of Exile is already one of the most incredibly customizable and modular action RPGs around, that was already plenty exciting.

Since then, they’ve done the kind of bug-squashing you might expect, and Grinding Gear appear to have finally tamed the de-sync problems that have dogged Path of Exile for ages. But what we didn’t know until now is that The Awakening is also bringing a ton of fresh material to challenge leagues in the form of two new leagues: Warbands and Tempest. We talked to Chris Wilson to learn what’s up.

“Both of these challenge Leagues are designed to make players care about the world they’re playing in,” explains Wilson. “We want people who are looking at the overall map of the world areas to have to make decisions based on the rewards or challenges that are moving around due to the Challenge Leagues.”

The standard one is Warbands. The Warbands League has various AI warbands — each with its own theme and strengths — seeded around Wraeclast that will work together to kill players. So instead of the usual random group of mobs that you just have to grind into powder, you’ll instead face what amount to small combat units that are designed to work together.

“Over time, their areas of influence changes. So you’ll get a situation where the leader is in a certain location, and players will want to go there to fight him, because he drops good items,” Wilson says. “But by doing so, they reduce his influence there, and the warband goes somewhere else, allowing another warband to take control of that area.”

So the warbands should make the world feel more dynamic, but their most exciting aspect is the way they use new AI abilities and behaviors. Support characters will focus on helping the front-line monsters, who will be focused on killing the player. But in areas where the warband’s influence is very strong, leader and elite units will show up to provide additional bonuses.

“By default, they don’t really want to attack you. They feel their minions can do it for them and, to be honest, a lot of the time their minions are quite dangerous due to the presence of the leaders,” Wilson says. “But as the minions start to die, and the leader realizes the tide is turning, the leader can take matters into his own hands and attack you directly. And we’ve made sure that you KNOW when the leader is attack you. And it may force you to change your strategy.” 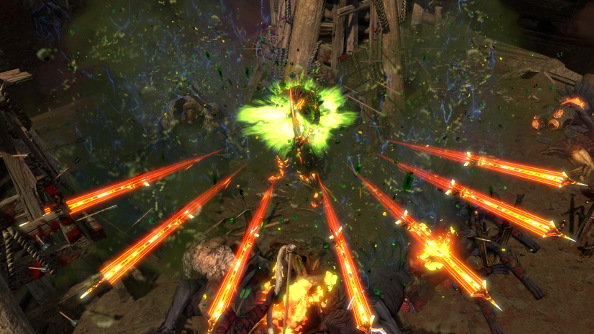 That should provide an interesting tactical wrinkle to Path of Exile’s straightforward ARPG gameplay. Each of the three warbands had a different designer and will have its own style of fighting.

Tempest League might even be more interesting. In Tempest League, magical Tempests will open up in Wraeclast and start influencing the players and monsters that are nearby. It can provide buffs or penalties to either side, which will change how you want to handle them.

“So you kind of need to kite the monsters into or out of the tempest depending on its properties,” Wilson says. “We have 30 or 40 these.”

The modifiers the Tempest puts on the monsters can also affect their drops, which again changes the calculations players will need to make in combat.

“When a Tempest affects an area, it affects it for everyone in that league,” Grinding Gear explain in a press release. “Approximately 50% of areas are affected by a tempest at any one time. These tempests change every hour, on the hour. You can look at the world map to see what Tempest affects each area. Some of the tempests are rarer and much more valuable than the others, so it’s good to keep a lookout for them.”

Remember, though, that Tempest League is a hardcore league, so once you die, you’re back to Standard play.

“We’re expecting to see a lot of hardcore characters killed by greed when a Tempest comes along that’s valuable,” Wilson says.

This is pretty exciting stuff for Path of Exile players, and sounds like it should all make the world feel much livelier when The Awakening is released on the 10th.