Nobody seems to talk about Path of Exile much anymore. Even around here at PCGamesN, after being pretty high on the game when it came out, our attention shifted to Diablo and stayed there once Reaper of Souls came out and fixed Blizzard’s action RPG. Before I talked to Grinding Gear Games about their upcoming expansion for Path of Exile, I decided to give the a game a shot, just so I could have some idea of what I was talking about in the interview.

About forty-five minutes later I was hooked. Path of Exile is not the off-brand, free-to-play Diablo that my prejudices had me expecting. It’s not something that ARPG fans used as a generic substitute while Diablo 3 got its act together. It’s a nuanced, challenging ARPG with an identity all its own. And most importantly, for certain types of ARPG fans, it’s a game that takes Diablo 2 as its foundation, and moves in a different direction from the rest of the genre. And with The Awakening expansion, that direction has led to some interesting places.

Path of Exile does not care about what is convenient. It does not care about being accessible. For a free-to-play game, it doesn’t even seem that concerned with making money. It’s the Portlandia of ARPGs, a place where the 90’s never ended, and that wears its idiosyncrasies on its sleeve.

Let’s start with the most obvious element of Path of Exile: the enormous character skill-tree. Any of the game’s classes can veer off in wildly different and mutually exclusive directions, assigning skill points to open up giant skill branches that can transform what your character is capable of. But here’s the catch: you can’t just re-spec your character at-will. If you want to see what else you could do with your favorite character class, you have to create an entirely new character and replay the game. You can’t even buy respec options with real money.

It’s 180 degrees from Diablo 3’s approach to character progression, where you’re encouraged to try different skills and builds for your character whenever you like, and even employ them situationally based on what you’re facing.

“We feel that having character identity is important,” says Grinding Gear’s Chris Wilson. “You’ve grown your character your way. It may not be the right way to do it, but he’s the way that you’ve done it and you’ve learned from it, so you’ll make another one and make it better.”

But isn’t that hostile to players? Forcing them to grind through the game again just so they can see what else they can do with their character? It depends on the player, says Wilson.

“To some extent, the type of person who finds the lack of respeccing to be a problem probably isn’t going to enjoy the game in the long-haul,” he says. “We feel that people playing the game is a good thing. And if… you have to play through again to do things differently, that’s not necessarily a negative. We want the game to be fun to play through for the second time. That means having it feel like a different experience.” 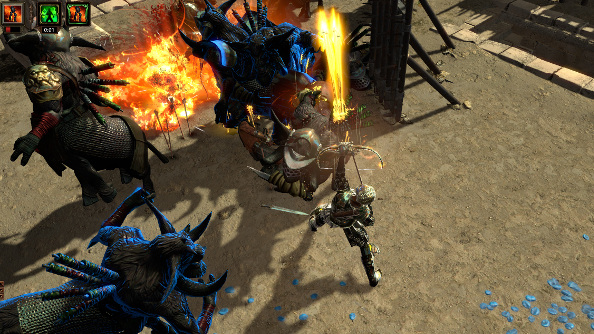 I don’t mean for this to sound like the sole appeal of Path of Exile is nostalgic, as if this is a game from bygone “good old days” when men were men, and they played Diablo 2 on hardcore while knocking back whisky with Hemingway in a Spanish bullring. But this comfort with repetition and, yes, frustration is striking. Especially since, unlike many free-to-play games, Path of Exile doesn’t use frustration as way to sell you on microtransactions.

“[Our main source of revenue] is stash tabs,” Wilson explains. “And the reason [players] buy them is really that extra storage space is the only thing we sell that’s really useful, if you’re looking in terms of convenience. It accounts for 60% of our revenue, which suggests how much money we’re leaving on the table by not aggressively pursuing other options. Because that’s where we draw the line. A little extra storage space is as much advantage as we want players to have. Because we really believe that anymore would be unfair to the game.”

I was curious whether the game is still faring well in an environment where Diablo 3 is finally in a good place, and has regular “seasons” to promote ongoing play. Between that and games like Torchlight 2 and Borderlands, I assumed that Path of Exile had to be feeling a pinch. Just judging from how much the conversation around the game died-off after Reaper of Souls, I assumed that the audience had probably moved on as well. But according to Wilson, it’s carved out distinct space for itself away from the rest of the ARPG genre.

“Basically, our competitor is more things like WoW than it is another ARPG,” Wilson explains. “What’s interesting with Diablo 3 is that our playerbase is basically the anti-Diablo 3 playerbase. …They’re the people that were complaining about Diablo 3. So we get these weird situations where they release their expansion, Reaper of Souls, and it does a lot of great stuff for their game. And our player numbers actually go up slightly rather than down because of the increased press to do with action RPGs.” 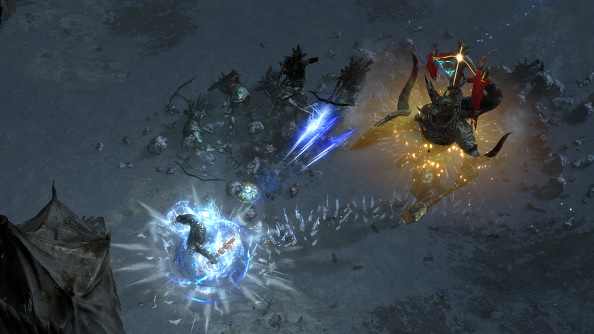 Path of Exile is on third expansion, The Awakening. The Awakening plays to Path of Exile’s greatest strengths, Wilson thinks. While the skill tree is the biggest and most obvious selling point for Path of Exile, it’s the itemization system that he thinks was the best thing Grinding Gear did with the game. It’s a system where items have their own unique properties, but then so do the gems you can socket inside of them… and the gems themselves acquire experience, level-up, and become more potent. So just deciding how you’ve arranged your armor and weapons loadout has huge ramifications for how your character will function in combat.

With The Awakening, however, Grinding Gear have taken the itemization system and applied it in some unexpected places.

“We wanted to have a random area system in the endgame,” Wilson says. “So we itemized them. Because the general mantra of making everything an item seems to work really well.”

The way it works is that you use a device to create a random endgame dungeon. You feed resources into the device to open the dungeon but the device will also take modifications in the same way that your weapons and armor will. So the same kinds of effects you’ll see applied to your gear might also apply globally across the dungeon you’ve created.

“So you can find areas that are more difficult because the monsters reflect damage, or they have multiple projectiles or various other things that modify the area,” Wilson says. “And we’re using the exact same crafting system that we’re using in the game, so all the things the players understand allow them to modify areas.” 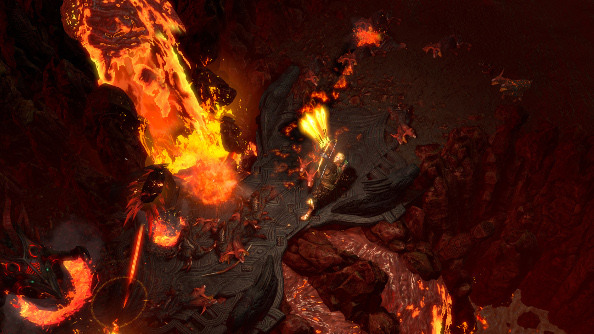 Being endgame content, however, this stuff is meant to be both difficult to access, and difficult to survive.

“The intention is that you can only make the area harder,” Wilson says. “Everything you do will make it more difficult. But when you make it more difficult, you also gain bonuses to the items that drop there. And that includes bonuses to the chance of finding more itemized areas within it. So it’s kind of a pyramid scheme thing, where you run the lower ones as much as you can so you have a shot at finding the higher, harder to get ones. …You’ll see people trading wealth that’s taken them days to accumulate in-game for a shot at playing five minutes of one of the high areas, because that’s where you get the best in-game items from.”

Unlike other dungeons, these endgame areas are almost one-shot affairs. If you go in with a full party, they are absolutely “one life to live” permadeath situations.

“The areas allow 6 entry portals, so if you have six people going in, you’re allowed one entry each. If you’re going in alone, you’re allowed six entries for yourself. But this is to balance the advantages of being in a team versus playing alone,” Wilson says. “It also limits the amount of items that you can take out of an area, because you can’t make 100 trips hauling stuff out. So you have to kind of pick the best stuff that you want to keep.” 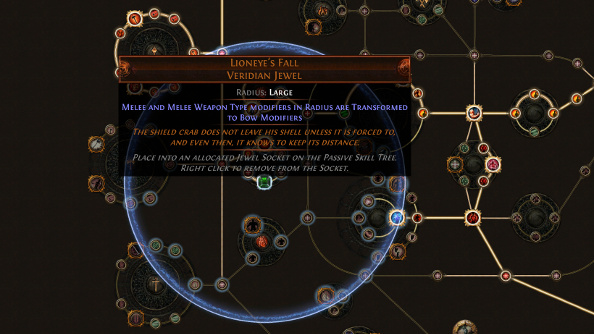 Path of Exile involves a lot of grind, a lot of potential failure and, with this new endgame content, a higher risk of having failure turn into real loss or resources and power. I asked Wilson if they didn’t sometimes risk making the game too frustrating.

“We basically model this around our experiences playing games, because at the end of the day that’s all we have available,” he says. “We could pontificate all day about what makes good design and what makes bad design, but we just use our gut feeling about a lot of it.”

In a genre where the conversation often begins and ends with the current state of Diablo, it’s been easy to lose track of Path of Exile. I’ll cop to discounting the game in my head because I am always expecting free-to-play games to force me to choose between wasting time and forking over cash.

But Grinding Gear appear to be walkin their own path. It might trace its roots back to Diablo 2 but, after 15 years, Path of Exile seems like the road not taken for the ARPG genre.

The closed beta for The Awakening begins later this month. You can sign up here.