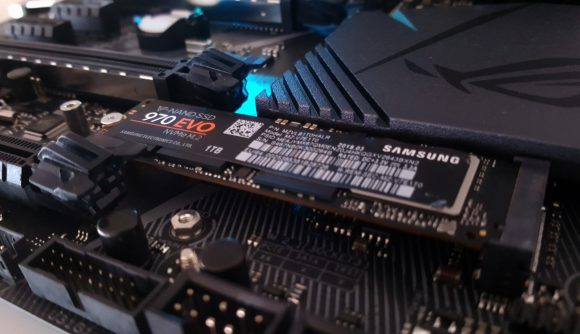 If you’re looking for the best SSD for gaming right now, then a PCIe 4.0 NVMe drive is your best bet, with speeds of up to 7000MB/s. Since we’re nearing the theoretical maximum speeds of 8GB/s in its x4 M.2 format, however, we’re already looking ahead towards PCIe 5.0 technology before PCIe 4.0 even becomes standard.

PCIe 5.0 has the potential to double the bandwidth over the previous generation with up to 16GB/s read and write speeds. Better yet, the new tech could be sitting in the best gaming PC in just a few years time, according to Tom’s Hardware.

Manufacturer Silicon Motion has announced that ‘enterprise-grade’ (read: not for consumers) SSD controllers with a PCIe 5.0 interface will be released in 2022. With PCIe 4.0, there was a slight gap between the standard moving from commercial applications like servers to consumer tech such as gaming PCs, and we’d expect the same to apply with PCIe 5.0, so it could be a year or two until we see consumer-grade PCIe 5.0 drives hitting the market.

Even though Intel is only just adding support for PCIe 4.0 next month with its new Rocket Lake processors, the fourth generation PCIe slot may already show its age quite soon.

That’s not to say Intel isn’t prepared, however. According to Tom’s Hardware, Intel’s 12th generation Alder Lake processors, also expected to release this year, may come with support for the fifth generation standard. The same’s likely true of AMD’s Zen 4 CPUs, which are slated for a 2022 release, bringing with them DDR5 and PCIe 5.0 support too.

Considering PCIe 6.0 is on track to be finalised by the end of the year, who knows how long PCIe 5.0 will last before it’s outdated? Our guess is not very long at all, given the expected shelf-life of PCIe 4.0.