PC Specialist’s Vortex 2500 is one of the prettiest, most powerful, and yet most frustrating Intel Skylake-X PCs around. It’s housed in a beautifully lit Corsair chassis, can chew through games and productivity tasks without breaking a sweat, but needs too much tweaking out of the box to get the most out of the hardware on show.

You need a great screen to make the most of your rig, so check out our pick of the best gaming monitors.

And that’s what you pay the big bucks for, right? That’s why you go to a system builder to create your rig rather than piecing it together yourself on the kitchen table. You want someone reliable to go through the whole fiddly process so you can just unbox it the other end and enjoy the fruits of their labour.

You don’t want to have to start digging around in your new PC to make sure the right drivers are installed and the components are set up correctly. Now, I’m a big fan of PC Specialist, they’ve built some of my favourite gaming rigs and laptops over the years, but there are some glaring issues with this Intel Core X build.

But let’s start with the good… it’s achingly pretty. The Vortex 2500 has that elegant, LED-lit look nailed. Despite the colourful fans and lighting strips inside, it’s not garishly in-your-face, thanks to the tinted, toughened glass panelling of the Corsair Crystal series chassis it’s built into. You can always have it strobing in some colour-crazed Rainbow Islands homage, or simply set it to soothe as softly lit uplighting for your components.

You will, however, need to do some work to get the chassis fans, LED-lit memory, and glowing Asus motherboard configured because they’re all controlled separately. Yeah, Corsair and Asus don’t necessarily play nicely together in terms of their different RGB LED controllers, which means you have three different things to deal with in order to make good with the pretties.

There was no Aura installed to allow us to change the motherboard lighting, nor was there a Corsair Link install to give us access to the LED-lit RAM. The front panel at least gave us a way of altering the front fans on the fly. 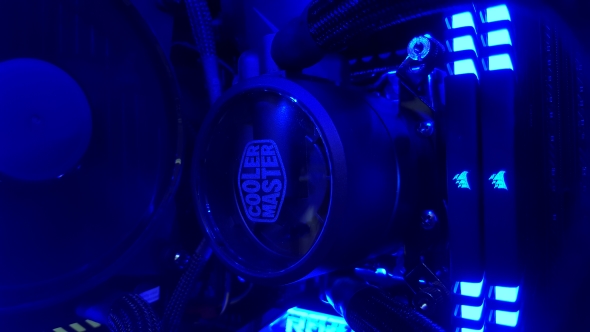 For doing the games, the Nvidia GTX 1080 Ti is in attendance, offering all the frame rates in your favourites. The top-spec GeForce GPU is a li’l stunner, and means the Vortex 2500 is able to deliver super-smooth gaming almost no matter what else is in the rig.

But PC Specialist have also jammed our current favourite high-end gaming CPU, the Core i7 7820X, into the Vortex 2500 machine. It’s one of the latest X-series CPUs and contains eight HyperThreaded cores with all of Intel’s single-threaded gaming performance chops to boot. It’s not the highest-spec chip around, with only 28 PCIe 3.0 lanes, but at 4.3GHz it’s still a potent gaming processor.

Of course, AMD have their own high-octane, octa-core CPUs with their Ryzen 7 range, but they don’t clock as high, don’t quite have the same gaming skills, and only support dual-channel memory as opposed to the X-series quad-channel. Except this Vortex 2500 PC doesn’t actually support quad-channel memory itself out-of-the-box either.

PC Specialist have opted not to use four memory DIMMs to populate the four potential memory channels available to the system, essentially halving the memory bandwidth of the system. For pure gaming performance, that’s not going to make a huge difference, but it might if you were doing other, more professional-class gubbins with your rig. It also means you might as well have picked a cheaper Ryzen 7 chip too.

To be fair to them, with this build there’s no way they could have filled out the other two channels anyway as the Cooler Master liquid chip chiller’s reservoir is blocking the DIMM slots. Their only hope would have been some super low-profile RAM modules, but I suspect the reasoning behind only going for a dual-channel setup was mostly down to price – in the same way you get machines with only a single DIMM filled on the dual-channel side. 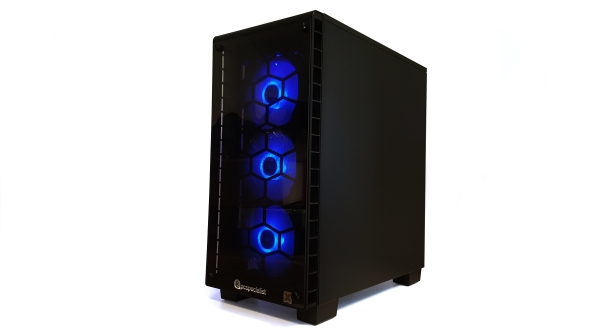 My other big frustration with the rig is on the storage side. The 512GB Samsung 960 Pro is a fantastic little NVMe drive, and one of the best SSDs around because of its incredible performance… when it’s set up correctly. There is a slight issue with using the standard, non-Samsung NVMe drivers, which means you end up with the drive writing incompressible data at a quarter of its full capacity. Once the Samsung drivers are installed the SSD absolutely flies, but it’s a real shame that’s not there when you pull the PC from its packaging.

Overall, these are only relatively small issues, which only require a touch of Google-Fu and some free downloads. The problem is I was only aware of the memory and storage struggles because I was testing the system, not just sitting back, enjoying my new £2,500 gaming rig for all its techie goodness. A gamer who’s just got their expensive new machine running for the first time may have no idea they’re not getting the most out of it, and that’s a shame, because the Vortex 2500 has a lot of potential.