How can they fit so many gigamabytes – essentially equating to all of the datas – into something so small? It beggars belief that Samsung are able to squeeze a full 1TB of storage into their tiny 960 Pro SSD. And this isn’t even the most capacious of their PCIe-based NVMe drives. Sigh. The future’s ace, isn’t it?

Want more speed from your PC for free? Check out our simple how to overclock guide.

The 960 Pro is the follow up to Samsung’s first consumer-focused NVMe SSD to hit our PCs and, along with the Intel SSD 750, wrote the rulebook for how the next generation of solid state storage would perform. This new Samsung drive though is writing a fresh chapter all by itself.

Looking to dodge the exposition? Use the quick links below to skip to the performance benchmarks and all important final reckoning. 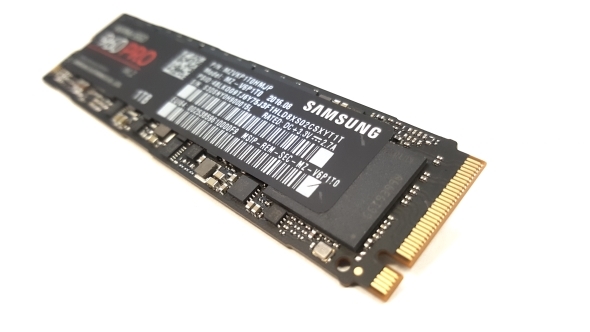 Arguably the most important part of the Samsung 960 Pro’s spec sheet is the fact it’s running with the non-volatile media express (NVMe) protocol.

NVMe was the first storage protocol to be written from the ground up to cater for the rise of solid state storage and the PCIe interface. Before it arrived we were anchored to the old school SATA interface and AHCI protocol – both designed for the mechanical spinning platters of traditional hard drives.

That was fine in the primordial soup from which the nascent solid state drives crawled, where performance degraded if you so much as looked at your expensive 64GB SSD and they struggled to top 100MB/s, but the burgeoning marketquicklycoalesced into one of the most rapidly evolving, rapidly iterating parts of the tech industry and successive generations of SSD have found themselves bumping their heads against the 600MB/s performance limits of the SATA 6Gbps interface.

But even when SSDs switched over to the higher bandwidth PCIe interface they found the AHCI protocol they were using meant they were still limited in their performance. That protocol was invented for high-latency spinning platters with a whole slew of commands to run through before anything happened on the disk. SSDs still have to slog through all of these legacy commands, wasting valuable CPU cycles, to get anything done. NVMe though was introduced to cut through the waste and give SSDs the freedom to do what they’re good at – getting to your data fast.

The next most important part of the equation is the memory controller. It’s this which manages all the memory silicon sitting on the SSD PCB and, as is Samsung’s wont, they’ve once more used their own controller with the familiar Polaris title. It’s this Polaris controller which gives the 960 Pro its peak read write speeds of 3,500MB/s and 2,100MB/s respectively. Though inevitably you’re not going to quite see those speeds in the real world.

As one of the biggest flash memory manufacturers in the world it’s no surprise to see Samsung using their own advanced V-NAND to make up the 1TB capacity of this drive. Because of the 3D stacked nature of the memory it’s incredibly densely packed in, and the fact they’re using 256Gb modules only compounds that. There are only four memory packages on the tiny PCB. That’s pretty stunning.

Samsung have extended their range of 960 Pro SSDs so now this top range spans 512GB, 1TB and 2TB capacities, with the lower-spec EVO drives sporting capacities of 250GB, 500GB and 1TB respectively. 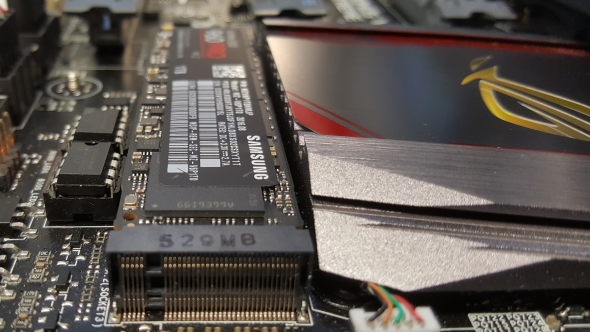 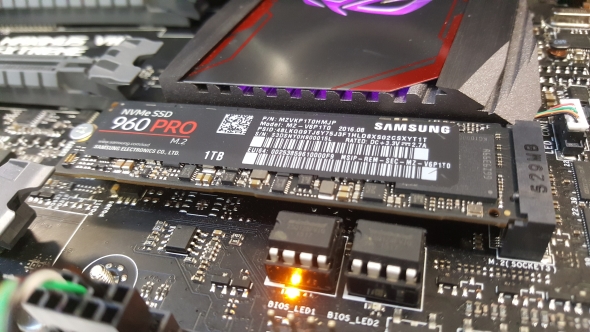 The Samsung 960 Pro is easily the fastest SSD I’ve had the privilege of testing. This thing absolutely flies through our synthetic test benchmarks, managing to get mighty close to the rated read/write speeds Samsung have given for their new generation of drives. Even in the tough incompressible data test of AS SSD the 960 Pro is knocking around 2.7GB/s and 2.07GB/s for read and write performance.

With the classic ATTO sequential read/write test the drive gets even closer, hitting 3.3GB/s and 2.12GB/s respectively. We’re at the point now where we can talk about SSD speeds in gigabytes per second rather than megabytes per second. That’s one hell of a step-change in the performance stakes.

There is still some stalling when it comes to the random 4k performance of the 960 Pro, however. These are the sort of tiny files your operating system is pretty much constantly reading and writing during use, so is a good indicator for how responsive it will be as a main OS drive. While the 4k performance of the 960 Pro is still excellent it’s not head-and-shoulders beyond the previous top SSD dog, the Intel SSD 750 drive, in fact its write speed is fair chunk slower than the Intel.

When it comes to the real-world performance it’s the speediest of our tested SSDs in terms of compressing down large batches of files and runs at the same overall speed as the Intel drive when transferring a large 30GB Steam library. That means it can read and write a 30GB folder of mixed file types in just two minutes and at points it was even transferring at the almost mythical 1GB/s level. 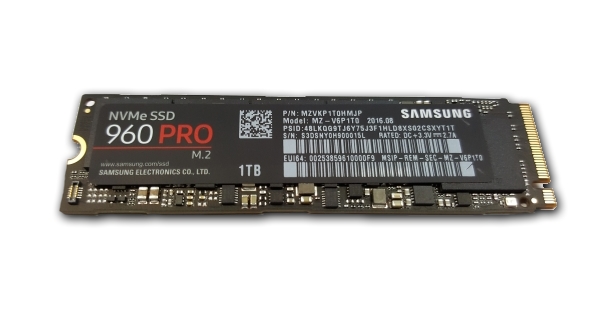 The Samsung 960 Pro drive is the most powerful consumer SSD you can buy right now. It’s also pretty good value too at just $0.63 (63p) per gigabyte – the 512GB version is even better value and promises the same level of performance too, though we would expect it to be a touch below what the 1TB drive can manage.

Spending $629 (£639) on a 1TB drive though might seem difficult to justify when you can pick up a spinning platter of that size for around $50 (£40) or a 1TB class SATA SSD for around $200 (£200), but for the step up in performance it offers you won’t look back. It’s a drive for the serious enthusiast, of course, but also represents what our standard consumer drives could look like in a few short years. M.2 SSDs are now incredibly easy to install as a main drive now too; a simple drop-in upgrade perfect for super-speed small form factor machines.

The 960 Pro then is an impressive technical achievement and is the pinnacle of solid state storage right now; Samsung are back on top of the SSD game.