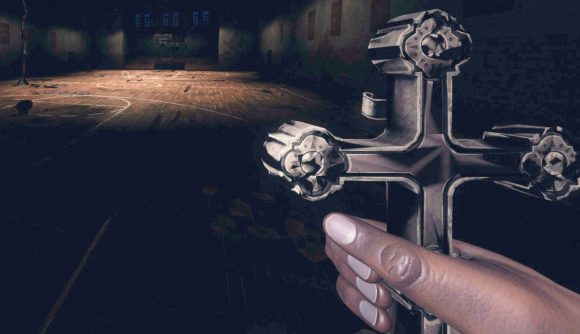 As Phasmophobia continues to keep a firm footing in Steam’s weekly top ten best-sellers, the survival game’s updates keep on coming, too. Kinetic Games has posted another batch of notes for the indie horror game’s latest update, and they usher in a bunch of bug fixes, gameplay changes, and quality of life tweaks.

There’s a hearty round of 11 bug fixes in Phasmohpbia’s latest patch, and they address both general hiccups and some VR-specific ones. For example, you’ll no longer be able to grab doors when you perish in the game, though you should be able to take photographs of fingerprints on the Asylum’s grey doors and, er, be able to get dispatched in Edgefield’s bedroom closets as normal now. Gulp.

There are also various “potential fixes” that should hopefully iron out some quirks now, too. These include tweaks to get ghost photos working correctly, stopping CCTV monitors breaking when players disconnect with head-mounted cameras, and Ouija board multiplayer spawns and photo evidence behaving as they should. Lovely stuff.

General VR-related fixes address things like “teleport grabbing” not working when your character has perished and head-mounted cams being tricky to get hold of.

Exorcised a few bugs with a few quality of life changes. #Phasmophobia pic.twitter.com/rwIJwz6Kpp

The brief list of gameplay changes, meanwhile, vary in scope – some very handy fixes mean that “changing characters will no longer unready everyone” and you shouldn’t come across situations where it’s too bright to see ghost orbs anymore, as camera night vision brightness has been toned down across all of the indie game’s house maps. Additionally, Tanglewood’s rain sound has been dialled down, banshees won’t “listen for their non-target players by sound”, and the parabolic and sound sensors can now detect sounds for one second longer.

You can check out the January 24 patch notes in full in the tweet above if you’re keen for the full rundown, and we have a bunch of handy guides on the game, too – if you want some pointers on Phasmophobia ghost types, Phasmophobia ouija boards, or Phasmophobia sanity effects pointers, you know where to click.