“That’s not a monitor,” they tell me, “that’s a bloody TV!” But the rest of the PCGamesN crew in the office is only jealous because the 43-inch Philips Momentum 436M6 has taken up most of my desk space, and Shadow of the Tomb Raider is looking stunning writ large in 4K HDR visuals with the RTX 2080 Ti straining away in my review machine. I get all the best toys.

Obviously part of the problem is that in an office scenario having a 43-inch display on your desktop is quite exclusive. Especially for anyone sat opposite me, who is now buried beneath the looming shadow created by this monster monitor. But in the home it’s a different matter, bigger is absolutely best and most especially if you’re genuinely looking to get the most out of running your games at 4K.

Sure, you can have an excellent 27-inch 4K panel, but what’s the point? The pixel pitch may be stunning, but you’re going to struggle to see the fidelity difference between running a game at 1440p and 4K at that screen size. At 43-inches, however, you’re really taking advantage of the high-resolution textures used to run games at that scale, and seeing the best of them… or the worst. But that all depends on the developer.

The massive Philips Momentum 436M6 is 4K HDR panel, that uses MVA technology as its go-to screen tech. VA, or vertical alignment, doesn’t quite deliver the same level of visual fidelity as you can get with the best IPS (in-plane switching) panels, but is generally more adept at displaying deep blacks. And that’s important for a good HDR screen, arguably more so than the sort of peak luminance that this version of the 436M6 can deliver.

Rated as a DisplayHDR1000 screen, the Philips panel is capable of hitting a peak of 1,000cd/m2 in terms of its maximum brightness, which is what helps make HDR content really pop. In general terms it’s more likely to be showing luminance levels around the 720cd/m2 mark. Just make sure you opt for the 436M6VBPAB, as the 436M6VBRAB only has a peak luminance of 450cd/m2. Yeah, monitor product codes, you’ve got to love ’em. 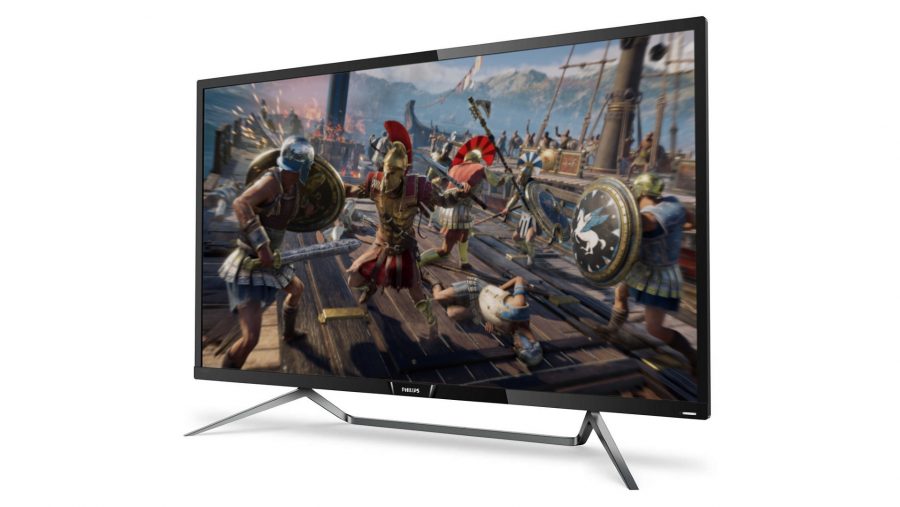 But while the black levels of the Philips screen are pretty decent, the contrast performance, however, is excellent. It’s the same with the the white saturation of the panel, which is fantastic. There’s also no banding evident in the gradients of colour in the display either, it’s as smooth as it is bright.

That doesn’t necessarily translate to a perfect picture when you’re sat directly in front of it with the Windows desktop stretching across 108cm of desktop real estate. There’s a little grain to the image, which is largely down to the fact that you’ve got a slightly larger pixel pitch than you’ll see on a good 27-inch 1440p monitor. But that’s only something you’ll notice on the desktop, looking at large Chrome and Explorer windows. In games that’s not a problem and you just get huge, detailed 4K HDR fidelity filling your eyeballs, and it really is something to behold.

Resident Evil 7 is one of the best tests for 4K HDR gaming; it’s a dark, grimy gameworld, which looks dreadful in HDR if the screen isn’t up to it. Our first experience with Asus’ supposedly masterful 4K G-Sync HDR PG27UQ showed as much. But the Philips 436M6 copes magnificently, delivering in both the darkest and brightest points on the screen. It may not be quite as pinsharp in its peak luminance as the Asus screen, but the mid-tones, and shadows aren’t washed away. 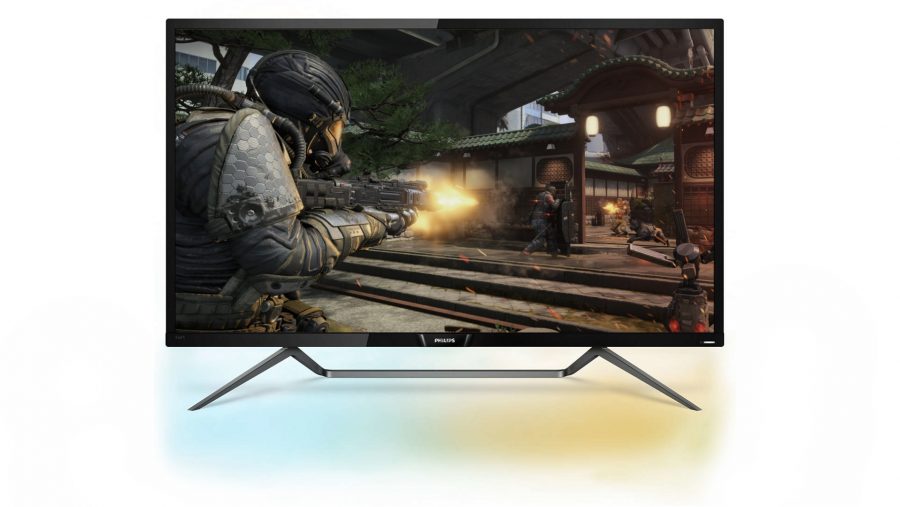 That follows through to HDR video content too. It’s bright and crisp on the Philips screen, though not quite as vibrant as the far more expensive ROG screen was capable of displaying, even with its Quantum Dot coating. But therein lies one of the biggest strengths of this gaming monitor – the price. At just £713 the Philips Momentum 436M6VBPAB is great value for such a feature-rich monitor, and around a fifth of the price of the smaller Asus screen. And I’d rather have this on my desktop.

But there is still the problem that HDR on the PC is still rather unforgivably b0rked. The latest PES has a HDR mode on the PC, but it’s a sudden death mode which immediately kills the monitor output. Shadow of the Tomb Raider is a technical pain – on many levels – and requires you to put Windows into HDR mode before you’re even allowed to check the HDR box in the settings. And even then the colours look more dull in the high dynamic range mode than as standard.

PC HDR isn’t the reason to pick up this screen then, nor is the admittedly quite lovely LED Ambiglow chassis underlighting, but as a great-value 4K gaming screen the Philips 436M6 is hard to beat.

One of the best 4K gaming monitors out there by virtue of its mammoth screen real estate, impressive visuals, and great price tag.