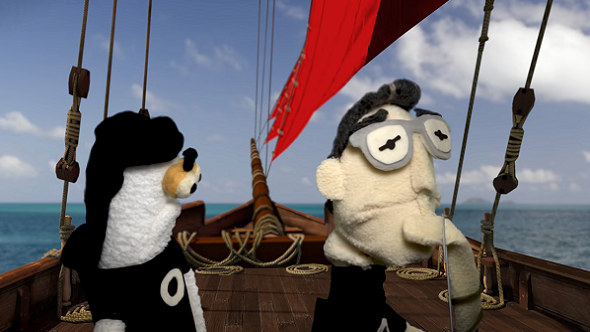 Sometimes backer updates or developer updates can be slow, boring, going deep into technical changes that go over my tiny writer’s brain. Of course, that’s not the case when the two people on-screen are puppets, making Pillars of Eternity 2’s latest backer update one of the best in history.

The quirky lore of Pillars of Eternity 2 is what makes its world so great, here’s why.

The video itself, the 45th backer update, goes into the ship system that was recently added to the Pillars of Eternity 2 closed beta, where you can fight on the high seas with your crew, be a pirate, and so on. It’s great fun, if you ask us.

Producer Katrina Garsten and design director Josh Sawyer are the voices behind the puppets the flappy-mouthed things on screen through the video, and Sawyer gives a lot of insight into the aims, goals, and features of sailing in the game. It’s a bit hard to pay a huge amount of attention to the things Sawyer and Garsten go into, but it’s probably worth trying to pay at least some attention.

Of course, the YouTube comments are loving it, with the top comment right now just reading “umm, guys, think it’s time to reduce the cocaine budget…”