Approaching a new city in an RPG – especially a game with classical 90s-style design – evokes a feeling that’s hard to define. As the fog of war pulls back to reveal the first set of gates and guards, a rush of exhilaration is inevitable. What lies beyond these walls? Are new party members just a few streets away? Are the merchants stocked with elusive new weapons? It’s a sensation Pillars of Eternity director Josh Sawyer knows only too well. It’s why he’s so keen for Neketaka, an urban centre in Pillars of Eternity II: Deadfire, to become one of the genre’s most fascinating landmarks.

Like all good RPG cities, Neketaka has centuries worth of lore and history built into its foundations. “There was a big, cataclysmic event that occurred,” Sawyer tells us. “It wiped out a huge portion of [the Huana] population – they had to rebuild from almost nothing.”

The Huana are contemporaries of the Engwithan, the ancient society introduced in the first Pillars of Eternity. But where the Engwithan only left ruins for us to glimpse at their culture, the Huana persevered.

“Neketaka is actually a surviving element of that ancient culture, but it was abandoned for centuries until it was repossessed by a powerful Huana tribe, the Kahonga,” Sawyer explains. “That tribe is nominally the ruling tribe of the Huana, but they don’t really respect their authority. They do command some respect among the tribes but they don’t have as much influence as other autocratic rulers might have.” 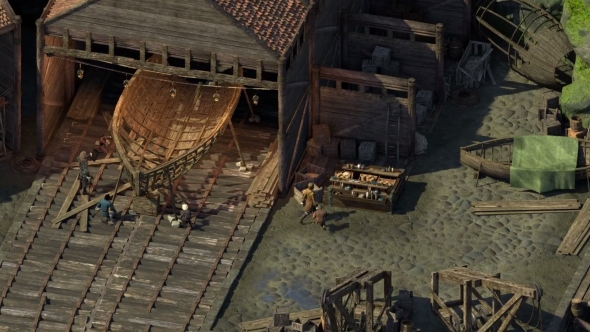 The Huana residing in Neketaka aren’t the only strong-willed culture, though. The city, like any major power, is a bustling network of multiculturalism. Two large trading companies, each with their own ideals, practices, and turf, fight for coin and influence, while a collective of pirates do their best to anger both companies /and/ the Huana. It is, as you can imagine, a very noisy place.

Stuck in the middle of these clashing cultures and businesses is you, the player. How you respond to the bustle of the city is, of course, entirely up to you, but you’ll probably want to weigh up political landscape before you do. “The player has their own agenda for coming to Neketaka,” Sawyer says. “You see different elements of each faction before you get to make alliances among them. You’re pursuing one objective, but it drags you into the middle of these four groups.”

Multiple potential ally factions is by now a tradition when it comes to Obsidian’s RPGs, but it’s a system that’s yet to grow stale. Even at this early stage it’s tantalising to think about what chaos could be achieved by double-crossing groups.

Creating a city with such scale and density requires a plethora of coding and artistic tricks. By designing district maps that don’t flow directly into each other, Obsidian are able to provide the impression of a much larger city beyond that of the areas you’ll be able to explore. What’s not directly witnessed is illustrated with lore drops. “We have a pop-up window that shows things like the population, a breakdown of the different races in the city, who rules the city, and what their major trade exports are,” Sawyer explains. “It helps flesh out your sense of the city, but also its place in the world.” 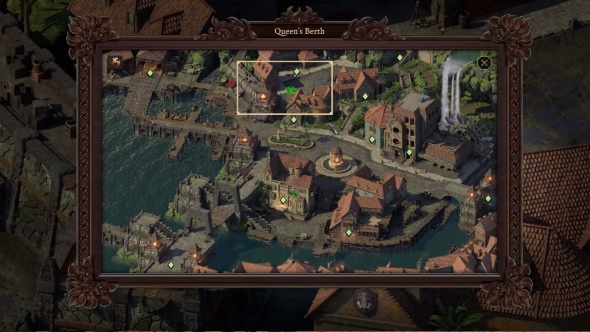 By moving away from free-flowing exploration of every nook and cranny in Neketaka, Obsidian risk making the city feel like an artificial playground. But Sawyer is confident the art team’s attention to detail makes it feel genuine. “It’s very important to give a sense of place within the city,” he says. “For example, when you go into the temple district of Neketaka, you can see this great drop-off in the background, because you’re pretty high up on the mountainside. As you walk around, there’s a great sense of depth. Whether you’re down at the docks and hearing the sound of ships coming in, or you’re up the clouds, we want to give you that sense of scale and place within the city.”

With Neketaka possessing such scope and bustling culture, you could be forgiven for thinking you’ll slip in unnoticed and be able to quietly manipulate its systems. Quite the opposite is the reality; you’ll be a big name from practically the moment you walk through its gates.

“As soon as you get to Neketaka, something happens to establish who you are,” Sawyer teases. “It’s a big event that means we can justifiably have anyone in the city be aware of who you are. When you’re on the critical path, while you’re suggested to go to the palace, it’s possible to avoid it if you want to. But if you do go to the palace, everyone who sees you knows who you are.”

And when everyone knows who you are, there’s one thing you can count on: an ever-growing line of NPCs demanding you help them out. Pillars of Eternity II’s cities will, without question, feature dozens of quest opportunities, but Sawyer notes that Obsidian have been careful with how those opportunities are presented.

“We do want players to stumble across quests, but if they’re forced into it all the time, that can get irritating,” he explains. “It can also be overwhelming when you have so many quests that you just don’t know where to go. Baldur’s Gate was much too sparse, and Athkatla [the capital city in Baldur’s Gate II] was a little too dense. Part of it also had to do with the way the player was pulled into those conversations. Sometimes it’s ok to pull players into a dialogue, and other times it’s ok to let a player see there’s something going on and decide [what to do].” 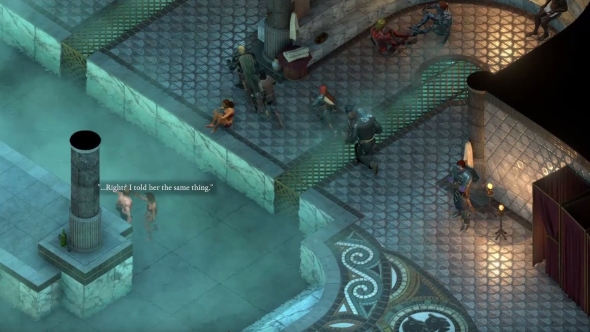 As you travel around Neketaka, you’ll find that the citizens respond to you in a variety of ways governed by a specific sense of logic. This is based in Obsidian’s wish for NPCs to be notably and realistically reactive.

“If you rob from a regular citizen, it seems a little jarring if they go berserk and attack you,” Sawyer notes. “[In Pillars 2] if regular old folks get mad, they will try to call the guards. If you start attacking them, they’ll flee or they’ll cower. The people who are there to protect the citizens – the guards – they’re the ones who will come and try and attack you.”

If you’re planning on staying on the right side of the law, the new chatter system is where you’ll notice most of Pillars II’s reactivity. “People react to you in different ways based on who they are,” Sawyer details. “People react to you being godlike, which is something [players] said they wanted more reactivity to. If you do certain things, people will thank you or they’ll curse you in the street. We try to have a lot of logic to it.”

That reactivity runs deeper than merely what people say about you, though. Your decisions and actions will have an obvious effect on Neketaka; the city itself will change over time. “The bigger challenge is less about giving something a sense of place, and more about giving a place a sense of change over time,” Sawyer says. “It’s the thing in roleplaying games that is much more difficult. Almost any genre can give you a strong sense of place, but when the player does something in a roleplaying game, they’re looking for what changes based on that. ‘Do people come? Do they go? Do they treat me differently?’ That’s always a challenge, and it’s something that we keep pushing.”

The fact that Obsidian are happy to face these challenges head-on is what continues to make their work fascinating. And based on the evidence here, it looks like Neketaka could be destined to join Baldur’s Gate and Athkatla in the hallowed halls of RPG’s finest travel destinations. We’ll find out if it lives up to the brochure when Pillars of Eternity II: Deadfire releases next year.