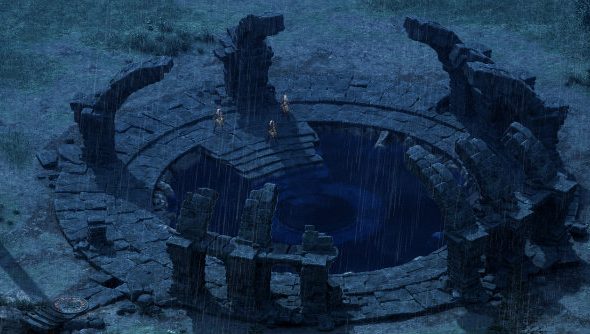 Known for games with branching, reactive stories that allow players to truly role-play, Obsidian Entertainment’s Product Director Josh Sawyer took a rapt audience at GDC 2016 through a session in which he described how Pillars of Eternity’s character creator and levelling system was designed to reward players no matter how they chose to play the game.

With this amount of thought behind it, it’s no wonder Pillars of Eternity made it into our list of PC’s best RPGs.

In starting Pillars of Eternity, Sawyer explained that the team at Obsidian had several goals. Some were merely tradition, such as using six attributes as in Dungeons & Dragons – Sawyer explained that “fan feedback hovered between five and seven attributes… so… six?” – but others were to avoid flaws that had become traditional in such systems. Attributes you can decide you don’t care about so you don’t level them up, or “explicit ties” between attributes and abilities that “affect viability,” such as how a Wizard in Dungeons & Dragons requires a high intelligence otherwise they can never cast certain spells.

“We wanted to have no bad builds,” he said. “In practice if you have an idea for a wacky character like a genius barbarian, that should be a viable character. It doesn’t mean it has to be optimal, but it should be viable. We wanted players to come up with the charismatic fighter, or the clumsy rogue.”

Sawyer noted, however, that unusual characters could be very viable in Pillars of Eternity, such as the “perceptive barbarian” who would have a high area of effect.

To facilitate this, the team at Obsidian built a system in which every attribute affects multiple statistics, so all classes rely on a broad range, while also giving room for players to specialise.

“Choice and consequence is important to Obsidian Games,” he said, while still trying to avoid the chance that players would hit mid or late-game roadblocks due to their decisions versus a player strictly “min-maxing” their character’s stats and abilities.

He did admit however that this decision was controversial with some players, with complaints including that leveling up didn’t offer enough of an impact, and that with a much more linear-scaling when leveling, the regular progression gave a “perceived lack of value” for players.

This was seen most particularly in the companions in Pillars of Eternity, who are widely considered to have bad statistics.

“People complain about the stats of our companions a bunch,” he said, “but the companion attributes reflect who they are as characters. they are designed to be more middle of the road. Let’s say you have a Paladin and they’re super min-maxed for damage. Our companion Paladin, Pallegina, is more evenly balanced so you can use them in different ways.”

He stated, however, that while the team “didn’t care” about people adjusting the companion stats, it was still “a bit weird” due to the way that Obsidian views the character stats to emphasise the narrative. Taking Pallegina as an example, he explained that she was “willful and tough,” but had “described failing her physical examination more than once, and was an avian godlike so her eyes are described often in reaction text.”

He then showed a “better characters” mod which massively increased her might and lowered her perception to just three. “This player wanted her to be able to cast lay on hands and tank. And to only be able to do that.”