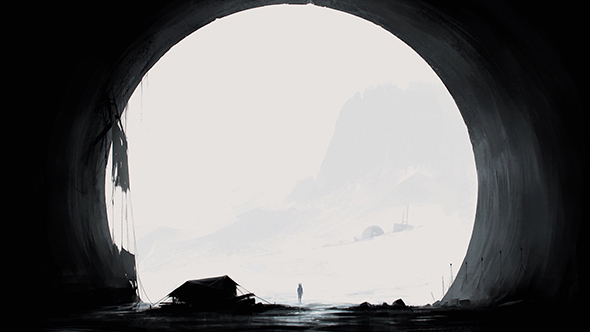 Playdead make puzzle platformers with somber storytelling and atmospheric visuals. It’s been close to two years since Inside released – just about enough time to start wondering what’s next from the studio. Today they’ve offered a tiny new tease of what’s next.

Inside maintains a well-deserved spot on our list of the best indie games on PC.

A new piece of art on their Twitter account shows a lone figure at the mouth of a massive tunnel, stepping out into the snowy hills at the foot of a mountain. Inside the tunnel is what looks to be a camp, while outside there looks to be the remains of another building. The image has some similarities to one shown over a year ago, with another figure in some sort of environment suit climbing a snowy mountain.

The image comes along with the message that Playdead are seeking people who are “creative, passionate and looking for a new challenge” at GDC this year. The Game Developers Conference begins March 19 this year, and as always serves as a place for developers to discuss new titles and recruit new game makers.

#GDC18 If you are creative, passionate and looking for a new challenge, please visit us at GDC’s South Hall, Booth #135 pic.twitter.com/ArOwCqo9FG

This is no confirmation of the next Playdead game, and no guarantee that this concept would make it into a final project – but they’re obviously working on something, and they’ve been exploring similar ideas for at least a year. Until we get details on what that new game is, you might want to console yourself with a sure-to-be horrifying Inside Collector’s Edition.