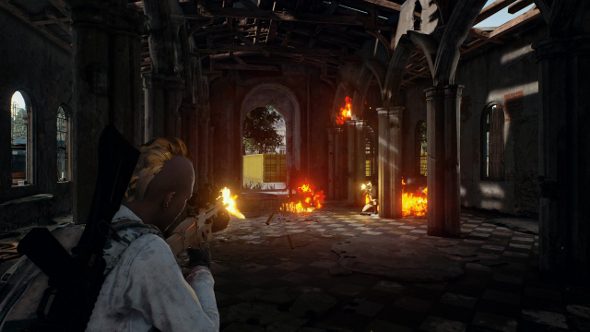 While Brendan “PlayerUnknown” Greene has no intention of leaving the game that bears his online nom de plume, PlayerUnknown’s Battlegrounds, he thinks he could leave the team now and the game would be fine.

Get yourself a chicken dinner with our PlayerUnknown’s Battlegrounds guide.

The main reason he believes that Bluehole would be able to continue developing the game without him is that he sees himself as the visionary, not one of the people actually building the game. Not one of the coders.

“I never really coded, that’s the thing,” Greene tells us. “With Arma 2 and Arma 3 BR, I coded a small bit, but a lot of it was libraries or scripts that were available. I’m not a big coder, and I wouldn’t touch the code in Battlegrounds. People tell me to fix the game. If I tried, I’d break the fucking game. I’m the visionary, I’m not the coder.”

In regards to the Arma mods, while he did some coding, he relied on other modders to help him rewrite it and make it “more efficient.” He put his trust in them, and is doing the same with Battlegrounds.

“I tend to trust the team, they’re doing great work. That’s why I feel like I could leave the team now and the game would still be complete. Which is fantastic, it’s great to know. I don’t want to leave the team now, because we still have lots to do. Just to clarify in case there’s a headline that I’m leaving the team, I’m not at all. But it’s great to have that, that I know the game is safe. They all have a shared vision here.”

And they certainly seem to know what they’re doing. 4% of all PC playtime in July was spent in PlayerUnknown’s Battlegrounds.