Deus Ex: The Fall expands the universe presented in Deus Ex: Human Revolution. It’s a story set just before its predecessor, aping its mechanics, themes and art direction. You can play as a subtle sneak or an aggressive soldier, a dick or a good guy; characters love to hear themselves talk, digressing into philosophical diatribes at the drop of a hat; and the whole bloody thing is lathered in a gaudy golden sheen that makes you want to go to the opticians.

But it was originally developed for mobile devices, and on that platform it stood out with its decent production values and similarities to its AAA sibling. It’s out on PC now, though, released a week early. The move has done it no favours. What is forgivable, or actually expected, in a mobile game is not so easily swept under the rug on PC. The Fall reveals itself to be an ugly, awkward mimicry of Human Revolution. 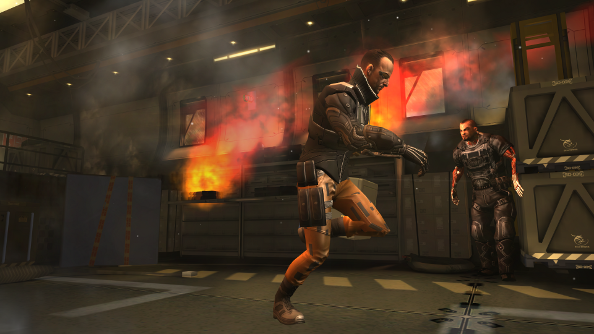 The first thing you’ll notice is that Deus Ex: The Fall does not look flattering on a big screen. I was far from a fan of Human Revolution’s art direction, but it at least made the most out of modern PCs and Eidos Montreal were able to paint some vivid scenes. The Fall attempts to copy this, but without the engine to back it up. It’s like staring through a window into gaming’s past, but the window hasn’t been washed in years and is now caked in yellow grease.

As Jules noted in his review, character models are recycled shamelessly, and to make things worse, they are all rather hideous. Emotionless NPCs spew out half-baked dialogue like malfunctioning automatons, constantly turning ever so slightly like they are standing on a broken turntable.

An early conversation between bland British agent Ben Saxon and the bland American agent whose name already escapes me had me fits of embarrassing giggles. The juxtaposition of the content of the conversation and the animation shattered any immersion. Saxon is filled with concern while his chum is agony because she needs her Neuropozyne fix, but their faces betray no emotion. They look the same as they always do. It’s hard to invest in characters who are shop mannequins. 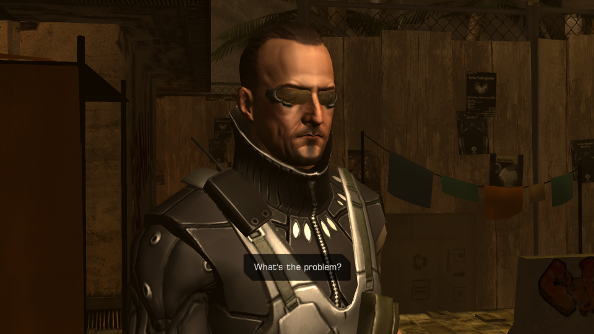 The only effort that has been made to update the visuals for PC is the inclusion of vsync and AA – neither of which has a noticeable impact when the rest of the game looks nearly a decade old when compared to contemporary PC releases.

Touch screen controls don’t work in FPS titles: the move to mouse and keyboard or gamepad controllers makes controlling Saxon substantially less frustrating. But while it’s an improvement on the original mobile control scheme, it is still awful compared to its contemporaries. There’s a lack of customisation: you can only change the sensitivity and the controls for moving Saxon to cover, and there’s no ability to remap buttons, so you’re stuck with the layout nFusion and Eidos settled on.

It’s unfortunate, then, that the layout is terrible. There’s a lot of press to do this, or hold to do this other thing, or press another button along with it to do a third thing. And instead of showing what each button does clearly, there’s a just a confusing map. 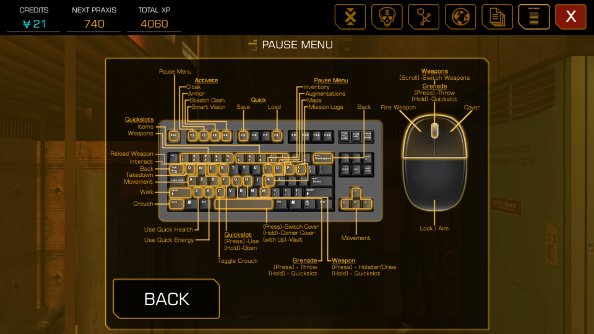 On launch day I noticed some frame rate anomalies, but since then it’s not dipped below 60, and nor should it, since it lacks any of the bells or whistles one expects from a modern PC title. That’s not to say there haven’t been other unusual hiccups, such as enemies seemingly using rollerskates when they charge at me, or being able to shoot through walls and solid cover one minute, and then unable to the next. And they vanish when killed, but that’s not a bug, it’s a feature. There’s really no reason for that to happen on the PC version, but it remains regardless.

The PC version of Deus Ex: The Fall is the superior experience. It’s easier to control, has a couple of extra graphics options, doesn’t feature microtransactions and removes the auto target guff that awful mobile controls necessitated.

But that doesn’t make it a good port. It simply feels wrong on PC, fails entirely to scale up to the new platform and offers nothing that isn’t done considerably better in Human Revolution or the original Deus Ex (which actually comes with The Fall). On iOS or Android, there isn’t really an alternative, but PC users should look elsewhere for their stealth fix.