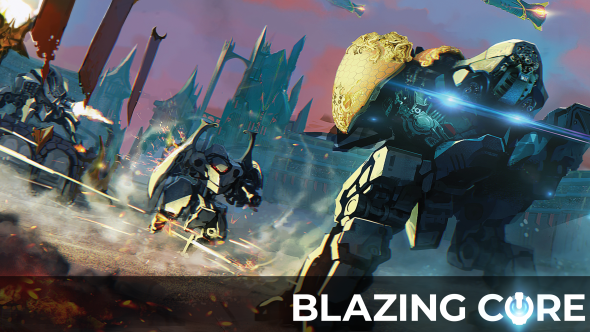 Fittingly enough, the story of the mighty mech genre is one of resilience. 2017 was Hawken’s last year on PC, its systems finally shutting down for good after Christmas. But other contemporaries battle on – the resurgent MechWarrior and BattleTech, and shiny new prospects like Blazing Core. Built by an indie team from St. Petersburg, Blazing Core melds the undying appeal of piloting a huge metal biped with the variety of a MOBA and imagery plucked from the age of chivalry.

Octobox Interactive have been determined to bring their interpretation of mech combat online – but networking issues were initially so great that the project was scuttled.

“There were several reasons, but the most important one was slow progress,” producer Leonid Gorbachev explains. “Programmers spent a lot of time researching the perfect solution for good networking. A year after that, I was hired to restore this old project at another company.”

The first decision the new team made was to switch to Unreal Engine 4.

“In good hands, network solutions for Unreal Engine 4 do more [for indies] than in some triple-A projects,” Gorbachev tells us. “We don’t have any networking or server-side programmers – all the programmers we have now are gameplay programmers, because Unreal allows us to focus on the game.”

By leaning on Unreal Engine 4’s Blueprint visual scripting system – a node-based interface designed to make code more accessible – Octobox’s game designers and testers have been able to pitch in with just “a little help from the programming side.”

“The result is that 70% of our current game is made with Blueprints,” Gorbachev says. 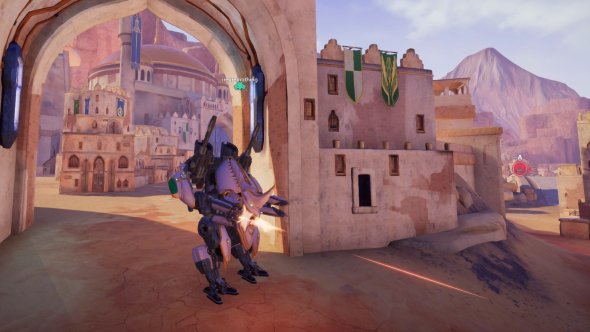 More than the networking, Blazing Core’s greatest technical challenge has been its damage system.

“We tried to create it about half a year ago, but there were issues with latency,” Gorbachev admits. “In the last Unreal update they optimised some methods we need to use, and in the future we will integrate this draft system into the current game.”

Blazing Core employs a complex collision system that interacts with the 3D models of the mechs. As senior game designer Andrew Pitulko explains: “You can hit one limb and only that limb will be affected by napalm.”

Detailed flame effects like these can slow games to a crawl, but Octobox have called upon their experience with a previous VR project. In VR, optimisation is a more crucial concern than ever – since even a consistent 30 frames-per-second is often not high enough to dispel nausea. 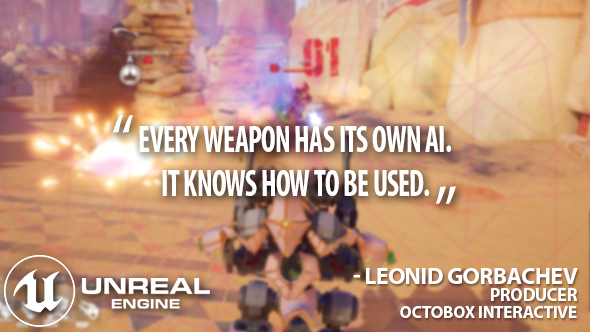 Fighting alongside the human-controlled mechs in Blazing Core are full-fledged robots – AI built to flesh out matches without a full roster of players.

“The current AI system was made to test the game, but now they work in regular games in our alpha,” Gorbachev says.

One of the more entertaining quirks of the system is that it gives guns a mind of their own. Using Unreal Engine 4’s behaviour trees, Octobox have split their bots’ brains into two.

“Mechs have some logic about how to select a position, and at the same time decide what weapon to use,” Gorbachev explains. “After that, every weapon has its own AI. It knows how to be used. The weapon decides, ‘I need to focus on this, and then I need to shoot here’.

“They don’t miss – they can’t miss. Sometimes they don’t react at the right time, but it works well. It’s better than some new players.”

The team are currently working on a more advanced level of intelligence for their bots.

“Our new map has a bot with its own AI and weapons, so it needed to be more smart and responsive,” Pitulko says. “Later we will use this new system for all our bots. Two ducks with one shot.”

Ultimately, though, it is the increasing knowledge and experience of Blazing Core’s players that excites the team more.

“In the alpha test and at exhibitions, players came back more and more and they became better, more like a team of heroes,” a proud Pitulko concludes. “That’s exactly what we want.”

In this sponsored series, we’re looking at how game developers are taking advantage of Unreal Engine 4 to create a new generation of PC games. With thanks to Epic Games and Octobox Interactive.