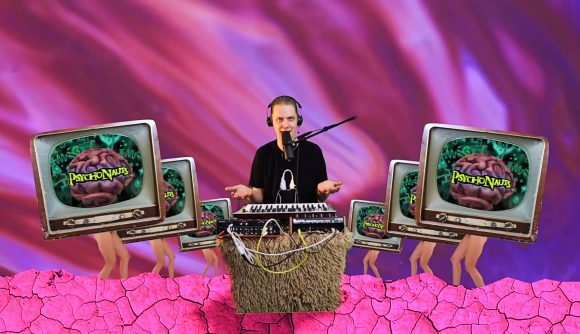 Icelandic musician Daði Freyr has teamed up with Xbox Game Pass to release a bevy of new tracks that are themed around Double Fine’s recent platformer. The synthy tracks themselves are upbeat and a good time, but what makes it all worthwhile is the video of Freyr performing them for himself. The idea is that he’s performing them from his mind space, but really it’s just him, a wee music setup, and oodles of random things in the background like old television sets on legs and brains.

Freyr was part of the group that represented Iceland in the last two Eurovision competitions if you need a refresher. This year, the group performed a song called Ten Years while wearing jumpers with pixelated versions of their faces on them – hm, sounds familiar. The song is about the last ten years he’s spent with his wife and how grand it’s been – bless him. Before that, he sang a different tune called “Think About Things,” which is inspired by becoming a father and wondering what his daughter would end up thinking, you know, about things.

If you fancy checking out Freyr’s Psychonauts 2 tracks, you can catch ’em all below. The whole thing is about 27 minutes and involves a fair few tunes.

If you’re curious about the other upcoming games on PC, you can hit that link. We can’t guarantee that Freyr will sing about them, too, though.