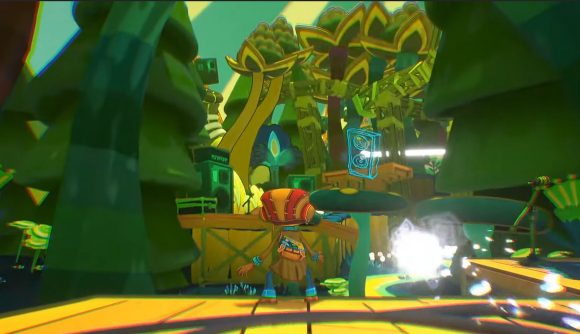 Plenty of you, ourselves included, have been taken by a certain Bugsnax tune over the past month or so. Luckily for us, we have a new contender for song of the moment as we’ve just got to hear what Jack Black’s been working on with Psychonauts 2.

The upcoming PC game got a new trailer at the Xbox games showcase that delves into the mind of a hippie. Not just any hippie, mind you, but a psychedelic hippie dirtbag that is none other than Jack Black. We also got a song from the Tenacious D musician that features the kind of powerful vocals you’ve come to expect from someone who was front and centre in School of Rock.

We’ve known about Black’s involvement in Psychonauts 2 since it was revealed at The Game Awards back in 2017. During a Jumanji bit, the musician teased that he was “good pals” with Double Fine boss Tim Schafer, and that Psychonauts 2 was a game he was involved in. The Psychonauts follow-up was initially revealed back in 2015 but has undergone several delays.

More recently, it was slated to come out last year but was delayed to 2020 to undergo some polish.

It's trippy, occasionally musical.. and a whole lot more! Explore strange mental worlds and meet cool characters (like this mysterious stranger voiced by Jack Black) in Psychonauts 2. Releasing next year on Xbox One/Series X and other platforms! pic.twitter.com/PhKwqwUFP2

Psychonauts 2 was initially crowd funded to the tune of $3.3 million before Microsoft snapped up Double Fine to make it part of Xbox Games Studios last year.