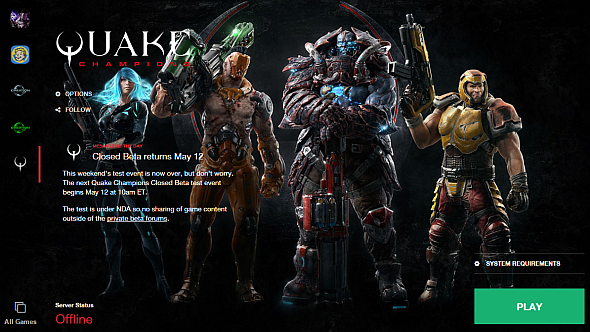 Quake Champions, the latest in arguably the most influential multiplayer shooter series to grace the PC, is getting an open beta later today. A weekend of fragging, gibbing and strafe-jumping lies ahead of you.

Want to know more? Here’s everything we know about Quake Champions.

Fancy getting in on the fun? Head over to the signup page on the Quake Champions website and grab a key. There’s no wait – you’ll be granted one immediately (we tried it ourselves). If you don’t have the Bethesda launcher, you’ll need to install it, then simply redeem your key, refresh the launcher, install the beta, and you’re all set for when it goes live.

You’ll be able to play all the currently available champions – familiarise yourself with them with our handy guide here. With the addition of the new 4v4 Sacrifice game mode, you now have a total of four from which to choose.

According to previous announcements, the beta will run until May 21 and be live 24/7 during that time.

The non-disclosure agreement that applied to previous closed betas is dropping, so if for some reason you don’t want to play, you can watch gameplay streams (we at PCGN will be doing one of our own, at 16:00 today.)

As befits Quake’s pedigree, it’s clear Bethesda are fostering an esports scene for Champions, with plans for its first tournament at Quakecon in August.