It’s QuakeCon 2017 and the internet has broken.

To be precise, the convention centre connection has crumbled – presumably under the weight of concentrated PC gaming. The mammoth Quake Champions tournament planned for the weekend has fallen behind schedule.

This unexpected development has caught the event’s Bring Your Own PC (BYOC) contingent by surprise. One player has projected his desktop background onto the wall of the show hall. In all-caps, Quake-orange text, it spells out the words: ‘REMEMBER WHEN WE COULD PLAY GAMES AND THE INTERNET WORKED?’

Another has beamed a Word document onto the plaster, which reads: 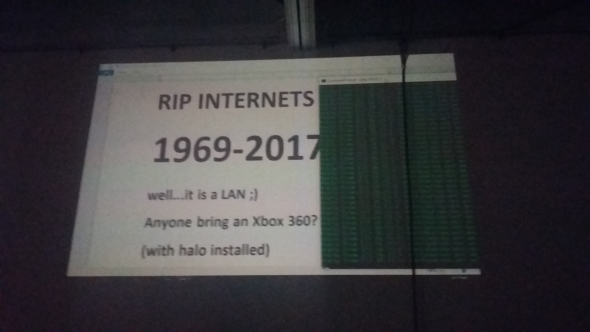 At least everyone’s taking it in good humour – such breakdowns are, after all, hardly unprecedented. “It happens every so often, but we always make do,” BYOC attendee Taylor says, here for his eighth QuakeCon since 2005.

As the first night of id’s event draws on, a subset of players get stuck into a LAN server for Factorio, the industrialist management game – echoing the origins of QuakeCon in the ‘90s. Many more dedicate themselves to single-player games: sitting side-by-side in rows, whiling away the hours with KOTOR, No Man’s Sky, and Europa Universalis.

Although the QuakeCon BYOC remains officially a LAN event, it’s not immune to the changes PC gaming has weathered around it.

“You’re anchored to Steam,” another attendee, Niall, points out. “It’s a little difficult to get the games going without that.” 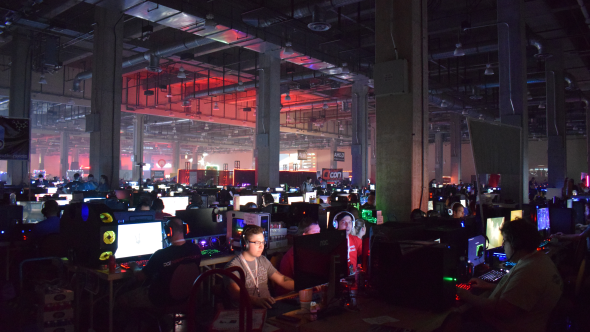 Niall’s first QuakeCon was in the late ‘90s, when the event was hosted in one of Texas’ anti-alcohol ‘dry counties’. His abiding memory is of walking into a hall with a beer in his hand and being chewed out by the security guard.

“He read me the Riot Act,” Niall remembers. “He went off, told me he could have me arrested. I was looking around to see if he was yelling at someone behind me.”

Niall used to come to QuakeCon with his clan, but now he brings his kids. His daughter, 22, is here to compete, while his son, a Quake Live convert, celebrated his ninth birthday in the BYOC pit yesterday.

“There are some people here that don’t play Quake at all,” Niall says. “[But] it really hasn’t changed a whole lot, because a lot of the people who were involved in it then are still here. We’ve been able to have that layer of abstraction between the gamers and the corporate company that owns the game now. They continue to pour a lot of resources into the current version of Quake and they’ve done a great job.” 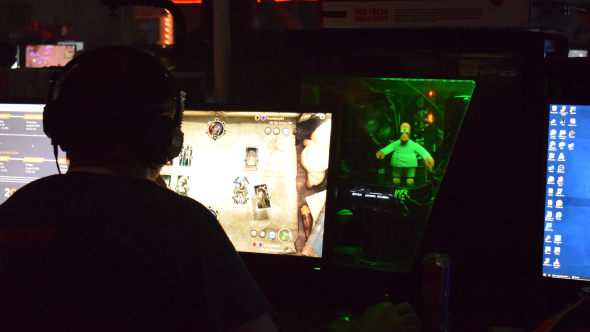 Bethesda bought id Software – and with them, QuakeCon – back in 2009. Since then it’s become a showcase for games like Wolfenstein and The Evil Within, but the BYOC flame burns on.

“It’s nice to see Bethesda getting more involved,” Taylor notes. “We don’t get all the goofy impromptu TF2 tournaments and that kind of stuff, but I’m alright so long as the community competitions are getting a prize pool.”

Today, Taylor and his friends have mostly been eating, playing board games, and watching Bee Movie.

“I’d rather be at QuakeCon with all my friends without internet,” he says, “than have internet and no friends at all.” 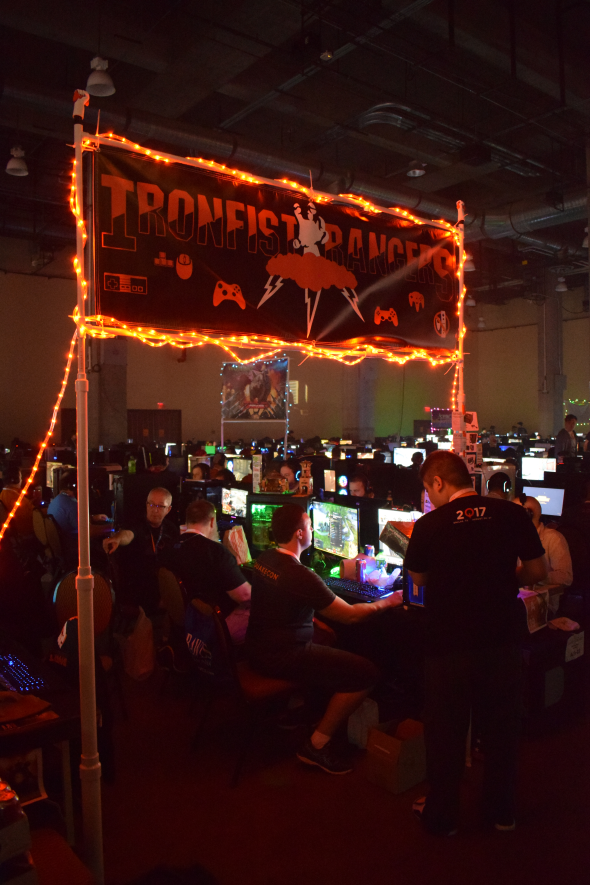 As the offline BYOC crowd plays, independently but together, a chorus of whoops passes spontaneously across the show floor. You can put it down to crowd theory, or you can call it what it is: quintessential PC gaming.

The sense of community is palpable. Among the sea of monitors, banners call out the names of recurring QuakeCon clans: Sword Dwarf. Waifus for Lifu. Professional Party People. The latter is named after a BassHunter track, and flies a flag based on the Windows 95 logo. Some groups have created makeshift archways to bear their standards, lending their rows the feel of brightly-lit Tokyo alleyways.

There’s a speedrun competition going on with the winner getting a computer case. Not that everyone wants one: some of the rigs are proudly exposed to display their innards. Others sparkle with kaleidoscopic light, or crackle strangely like plasma lamps. Occasionally, you’ll see a PC being taken apart and put back together again, as if by motorbike enthusiasts. One man sits in front of a screen asking for his Windows product key. He looks content. 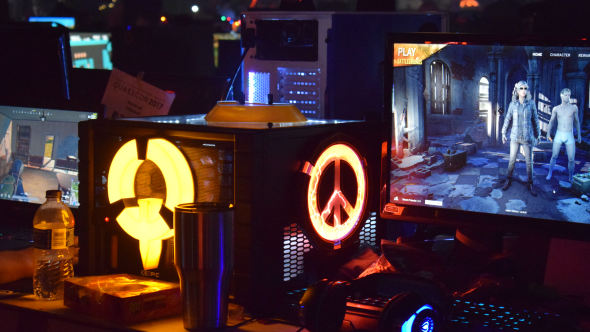 At this point the takeaway boxes are piled only four or five high. By the end they’ll be towering, the internet will be fixed, and the tournament will end on time with a double-win for 19-year-old Belarusian newcomer clawz.

But, right now, nobody knows that, and there’s no ETA on the connection. On some fundamental level, though, it feels as if everything is going exactly to plan. If you were to rip out QuakeCon’s heart in a Doom-style glory kill, that heart would have the letters ‘BYOC’ written on it.